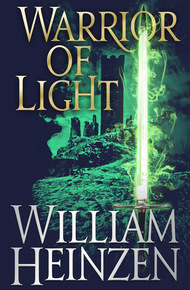 William Heinzen has been writing stories ever since elementary school, when he discovered the only thing cooler than reading about sorcerers was writing about them. He attended college at the University of Jamestown in Jamestown, North Dakota, where he received a degree in English (for fun) and a degree in Accounting (for a job). After college, he moved to Bismarck, North Dakota, where he works for a software company by day and writes by night. He loves experiencing new places, and during his time as a company "road warrior" traveled as far north as Barrow, Alaska and as far abroad as the Republic of Palau. Warrior of Light is his first novel.

Warrior of Light by William Heinzen

Tim Matthias has only ever known the peace of the South, but that peace is shattered when a group of mysterious creatures destroys his home. In search of answers, Tim discovers the poisoned wastelands of the North, where the Dark Lord Zadinn Kanas rules over all. It is here that Tim joins forces with a band of freedom fighters on a quest to find the Army of Kah'lash, a mythical force destined to serve those in need. At the same time, Tim must learn to use the magic of the Lifesource, for he is the Warrior of Light. As Tim struggles to accept his destiny, those around him must battle their way across the North, seeking a means to wage one last, desperate stand against Zadinn and his armies....

Boblin stared at the horizon. He wore a sword at his waist, a chainmail shirt over his chest, and a crossbow across his back. The overhead sun beat down on them as it climbed into the sky, casting the orange and red glow of the Deathlands in a bloody hue.

He marched with the other elion and with the men of Division Five, making their way forth across the ragged, stunted landscape, facing the yet-unseen plateau of Zadinn's dark citadel to the north. A light breeze picked up around them, but it brought no respite from the heat, only a swirl of dust and a faint scent of fear, the kind that come from those marching toward inevitable doom. There was nothing wrong with fear, though—in the North, it was a part of everyday life. One simply accepted it and moved on.

Soon, they would come within sight of the plateau, where Isanam and the malichon army waited for them. All that remained was the slow crawl as the two forces moved toward one another, the Army taking on the role of a length of melted steel, soft and pliable, stretched across the surface of an anvil, and the malichons serving as the hammer poised above, ready to fall at a moment's notice. The hammer hadn't descended yet, but it would soon, and it was Division Five's job to survive that blow, absorb the shock, and not to break.

The sun continued climbing above them, but the hour was of no consequence. Boblin wondered where Tim and Nazgar were right now. Probably sunning on a rock, enjoying ale and cheese until the battle is over. Maybe if Boblin was lucky, he'd find out where they were and join them for a brief spell. Something told him that lunch was not a part of today's agenda.

Boblin unconsciously touched one of the leather pouches hanging on a string around his belt. The Army was privy to a unique weapon, similar to that which had destroyed the walls of the Fort, but more potent, and they had helped the elion build a sizeable arsenal of the pouches before setting out. Boblin had practiced with a few last night, just to get a feel for them. The weapon should help even the odds. It wouldn't save them, not by a long stretch, but it would allow them to bloody Zadinn's nose a little.

Hedro marched next to him. The two had formed an uneasy, unspoken truce. Today, only their homeland mattered; today, all other disagreements had become absurdly petty. Their lives depended on unity, and on watching each other's backs. Farther down the line, Celia herself marched, ready as ever to take on the grim task in front of them.

The soldiers took a brief respite, a mere quarter of an hour, to conserve what energy they could. Boblin sank onto a nearby rock and drank from a flask of water. Nobody spoke, for there was nothing to be said. As Hedro found a spot next to him, Boblin silently offered him the flask. Hedro nodded in appreciation, taking the skin and drinking deeply from it.

"What do you think of this?" Hedro asked, lifting one of the pouches from his belt.

"We'll see," Boblin said. "The malichons won't expect it, at the very least. It won't hold them off forever, but it will stretch things out."

"That's what makes it fun, right?"

Something pricked Boblin in the side, and he turned around. A rose of all things, withered and tiny, but a rose nonetheless, jutted up from a crack in the stone slab. It had no place in this land, and yet here it was, a lone blossom of life amid a landscape of death. Boblin pulled the flower from the crevice, placing it in the front pocket of his shirt. For luck.

Soon after, they resumed their march, and within an hour came within sight of Zadinn's fortress, a silent, watchful stronghold hunkering atop the plateau on the horizon. Behind the battlements, plumes of fire and smoke leapt into the sky. The prisoners from the Fort—and the dwerion from the South—were no doubt behind those walls right now, cringing under the whip.

And in front of the plateau, on the slopes of the Deathlands, the malichon army waited for them. Boblin had known that Zadinn's force was big, but he nonetheless hissed in sharply upon seeing the massive, never-ending sea of dark-armored soldiers before them. There had to be at least fifty thousand malichons out there. The proverbial hammer now hung poised above the anvil, ready to strike.

Upon seeing the other army, Zadinn's forces began chanting in unison, stomping on the ground in anticipation. Boblin felt the earth shake under his feet. He couldn't make out any of the words, but they couldn't be good.

Well, this is what we came for. Time to tip the scale and see how the weights hold out.

The malichons started forward, moving slowly at first but steadily gaining speed. Captain Halion shouted orders as the Army of Kah'lash moved into uniform, blocked positions, while beside him Commander Jend took charge of the elion. Boblin planted his feet on the ground. He felt like he should grow roots, so that he could entrench himself in the stone to withhold the coming clash. The hammer was falling, and he needed to brace for it with everything he had. He loosened his sword in its belt, grasping the hilt with sweaty palms.

How in the name of Malath did we end up on the front line? We'll be cut to shreds in seconds.

Now the malichons were charging in full force. They had their mortal enemies, the Fort of Pellen, in sight, and they had every intent of grinding the elion into fine powder. The earth didn't just shake, it thundered.

Jend Argul stood in front of the elion refugees. Beside Boblin, Hugo and Ken raised the battle standard of the Fort of Pellen into the sky, where it slowly unfurled to reveal the sigil of a yellow sun against a black background. This was their sign, their motto, and their whole existence: a single light in a field of darkness.

"Men!" Jend called, voice carrying across the ranks. "I ask you this: when we were assaulted in our homes, and our comrades died, was it for naught?

"When the vrawl surrounded us in the Mountains, and our comrades fell, was it for naught?

"When we marched into the very teeth of Malath, and still more were lost, was it for naught?"

Commander Jend raised his sword above his head. "Pray to the Maker that you stand firm, that you do not falter, and that your blade sings true! Death comes for us, and we will meet it by spitting in Zadinn's unholy face!"

In tandem with Captain Halion, both men yelled a final command. "Charge!"

In that moment, Boblin shed all his fears. He'd never expected anything but death in these lands, yet he had nonetheless lived and persevered. He felt no more fear, no more regret, knowing that this was the hour his people had waited for. Knowing that, he was content.

And should he die here today . . . well, he was content with that, too.

Boblin unsheathed his sword, raising his voice in a war cry. The others joined in, Hedro and Celia and Wayne and all the rest. The banner of the Fort fluttered above their heads. The day was here, the time was now. Boblin charged with his comrades into the face of death, never once looking back.

The rose slipped free from his tunic and fell, tumbling end over end before landing to the earth in a shower of petals.