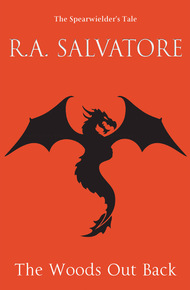 Spearwielder's Tale - The Woods Out Back by R.A. Salvatore

Gary Leger works in a boring menial job at a plastics' factory. His escape from his mundane life takes him to a blueberry patch near his house, in the woods out back, along with his well-worn copy of The Hobbit. his favorite book. On one such excursion, he is captured by a leprechaun, magically put to sleep in the woods only to awaken in the mystical forest of Tir'na'nog in the presence of his captor Mickey McMickey, who needs him to aid in reforging an ancient spear.

"The Woods Out Back" is the first book of "The Spearwielder's Tales," a trilogy Salvatore calls autobiographical – except that Salvatore was kidnapped by a hobbit named Bilbo, not a leprechaun named Mickey.

"YOU were caught fairly and within the written limits of your own rules," Kelsey said sternly. His sharp eyes, golden in hue and ever sparkling like the stars he so loved, bore into the smaller sprite, promising no compromise.

"Might that it be time for changing the rules," Mickey the leprechaun mumbled under his breath.

Kelsey's golden eyes, the same hue as his flowing hair, narrowed dangerously, his thin brows forming a "V" over his delicate but angular nose.

Mickey silently berated himself. He could get away with his constant private muttering around bumbling humans, but, he reminded himself again, one should never underestimate the sharpness of an elf's ears. The leprechaun looked around the open meadow, searching for some escape route. He knew it to be a futile exercise; he couldn't hope to outrun the elf, standing more than twice his height, and the nearest cover was fully a hundred yards away.

Not a promising proposition.

Always ready to improvise, Mickey went into his best posture for bargaining, a leprechaun's second favorite pastime (the first being the use of illusions to trick pursuing humans into smashing their faces into trees).

"Ancient, they are," the leprechaun tried to explain. "Rules o' catching made for humans and greedy folk. It was meant for being a game, ye know." Mickey kicked a curly-toed shoe against a mushroom stalk and his voice held an unmistakable edge of sarcasm as he completed the thought. "Elfs were not expected in the chase, being honorable folk and their hearts not being held by a pot o' gold. At least, that's what I been told about elfs."

"I do not desire your precious pot," Kelsey reminded him. "Only a small task."

"Would you prefer that I take your gold?" Kelsey warned. "That is the usual payment for capture."

Mickey gnashed his teeth, then popped his enormous (considering his size) pipe into his mouth. He couldn't argue; Kelsey had caught him fairly. Still, Mickey had to wonder how honest the chase had been. The rules for catching a leprechaun were indeed ancient and precise, and, written by the wee folk themselves, hugely slanted in the leprechaun's favor. But a leprechaun's greatest advantage in evading humans lay in his uncanny abilities at creating illusions. Enter Kelsey the elf, and the advantage is no more. None in all the land of Faerie, not the dwarfs of Dvergamal nor even the great dragons themselves, could see through illusions, could separate reality from fabrication, as well as the elfs.

"Not so small a task, I say," Mickey iterated. "Ye're looking to fill Cedric's own shoes—none in Dilnamarra that I've seen are fitting that task! The man was a giant . . ."

Kelsey shrugged, unconcerned, his casual stance stealing Mickey's rising bluster. The human stock in Faerie had indeed diminished, and the prospects of finding a man who could fit into the ancient armor once worn by King Cedric Donigarten were not good. Of course Kelsey knew that; why else would he have taken the time to catch Mickey?

"I might have to go over," Mickey said gravely.

"You are the cleverest of your kind," Kelsey replied, and the compliment was not patronizing. "You shall find a way, I do not doubt. Have the faeries you know so well do their dance, then. Surely they owe Mickey McMickey a favor or two."

Mickey took a long draw on his pipe. The fairie dance! Kelsey actually expected him to go over, to find someone from the other side, from Real-earth.

"Me pot o' gold might be an easier barter," the leprechaun grumbled.

"Then give it to me," replied a smiling Kelsey, knowing the bluff for what it was. "And I shall use the wealth to purchase what I need from some other source."

Mickey gnashed his teeth around his pipe, wanting to put his curly boot into the smug elf's face. Kelsey had seen his bluff as easily as he had seen through Mickey's illusions on the lopsided chase. No leprechaun would willingly give up his pot of gold with no chance of stealing it back unless his very life was at stake. And for all of the inconvenience Kelsey had caused him, Mickey knew that the elf would not harm him.

"Not an easy task," the leprechaun said again.

"If the task was easy, I would have taken the trouble myself," Kelsey replied evenly, though a twitch in one of his golden eyes revealed that he was nearing the end of his patience. "I have not the time."

"Ye taked the trouble to catching me," Mickey snarled.

"Not so much trouble," Kelsey assured him.

Mickey rested back and considered a possible escape through the meadow again. Kelsey was shooting down his every leading suggestion with no room for argument, with no room for bargaining. By a leprechaun's measure, Kelsey wasn't playing fair.

"You shall accept my offer, then," Kelsey said. "Or I shall have your pot of gold here and now." He paused for a few moments to give Mickey the chance to produce the pot, which, of course, the leprechaun did not do.

"Excellent," continued the elf. "Then you know the terms of your indenture. When might I expect my human?"

Mickey kicked his curly-toed shoes again and moved to find a seat on the enormous mushroom. "Suren 'tis a beautiful day," he said, and he was not exaggerating in the least. The breeze was cool but not stiff, and it carried a thousand springtime scents with it, aromas of awakening flowers and new-growing grass.

"Too beautiful for talking business, I say," Mickey mentioned.

"When?" Kelsey demanded again, refusing to be sidetracked.

"All the folk o' Dilnamarra are out to frolic while we're sitting here arguing . . ."

"Mickey McMickey!" Kelsey declared. "You have been caught, captured, defeated on the chase. Of that, there can be no argument. You are thus bound to me. We are not discussing business; we are . . . I am, establishing the conditions of your freedom."

Kelsey heard every word of it, of course, but this time he did not scowl. He knew by Mickey's resigned tone that the leprechaun had surrendered fully. "When?" he asked a third time.

"I cannot be sure," Mickey replied. "I'll set me friends to working on it."

Kelsey bowed low. "Then enjoy your beautiful day," he said, and he turned to leave.

For all his whining, Mickey was not so unhappy about the way things had turned out. His pride was hurt—any self-respecting leprechaun would be embarrassed over a capture—but Kelsey was an elf, after all, and that proved that the chase hadn't really been fair. Besides, Mickey still had his precious pot of gold and Kelsey's request wasn't overly difficult, leaving plenty of room for Mickey's own interpretation.

Mickey was thinking of that task now as he sat on the mushroom, his legs, crossed at the ankles, dangling freely over its side, and he was thinking that the task, like everything else in a leprechaun's life, just might turn out to be a bit of fun.

"IT cannot be," the sorceress declared, pulling away from her reflecting pool and flipping her long and wavy, impossibly thick black hair back over her delicate shoulders.

"What has yous seen, my lady?" the hunched goblin rasped.

Ceridwen turned on him sharply and the goblin realized that he had not been asked to speak. He dipped into an apologetic bow, fell right to the floor, and groveled on the ground below the beautiful sorceress, whining and kissing her feet piteously.

"Get up, Geek!" she commanded, and the goblin snapped to attention. "There is trouble in the land," Ceridwen went on, true concern in her voice. "Kelsenellenelvial Gil-Ravadry has taken up his life-quest to forge the broken spear."

The goblin's face twisted in confusion.

"We do not want the people of Dilnamarra thinking of dead kings and heroes of old," Ceridwen explained. "Their thoughts must be on their own pitiful existence, on their gruel and mud-farming, on the latest disease that sweeps their land and keeps them weak.

"Weak and whimpering," Ceridwen declared, and her icy-blue eyes, so contrasting her raven-black hair, flashed like lightning. She rose up tall and terrible and Geek huddled again on the floor. But Ceridwen calmed immediately and seemed again the quiet, beautiful woman. "Like you, dear Geek," she said softly. "Weak and whimpering, and under the control of Kinnemore, my puppet King."

"Does we's killses the elf?" Geek asked hopefully. The goblin so loved killing!

"It is not so easy as that," replied Ceridwen. "I do not wish to invoke the wrath of the Tylwyth Teg." She winced at the notion. The Tylwyth Teg, the elfs of Faerie, were not to be taken lightly. But Ceridwen's concern soon dissipated, replaced by a confident smile. "But there are other ways, more subtle ways," the sorceress purred, more to herself than to her wretched goblin.

Ceridwen's smile only widened as she considered the many wicked allies she might call upon, the dark creatures of Faerie's misty nights.