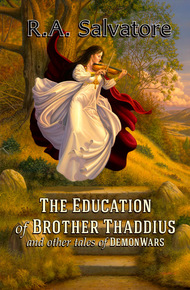 The Education of Brother Thaddius and Other Tales of DemonWars by R.A. Salvatore

"The Education of Brother Thaddius" picks up Salvatore's acclaimed DemonWars series with the event immediately following the novel "Immortalis." Even so, it can serve as a fresh introduction to a world where much seems settled, but where trouble looms in the shadows. With the release of "Child of a Mad God," the first book in Salvatore's new DemonWars series, The Coven," coming next February, this novella will offer a bit of background to lands that will once again be thrust into darkness."

"Oh, but you're a quick one!" Mather Wyndon cried out, leaping a fallen log and cutting a fast turn about a sharp bend in the trail. He spotted the creature he was pursuing, an ugly and smelly goblin, far ahead, scrambling up a steep hill and over a wall of piled rocks.

The large man lowered his head and started straight on, but he stopped fast at the sound of a cry to his right. He cut behind a tree, grabbing its solid trunk to help break his momentum, and pivoted about, his fine elvish blade glowing with an eager white light.

Out of the brush came the second goblin, running wild, running scared, holding its crude spear — no more than a sharpened stick, really — out wide in one hand, in no position to throw or to stab.

The creature wasn't up for any fight, anyway, Mather understood as soon as he saw its features, twisted into an expression of the sheerest fright. That was the secret of fighting goblins, the seasoned ranger knew. Catch them by surprise, and the cowardly beasts would scatter, all semblance of defense thrown aside. Mather smiled as a second creature burst out behind the goblin, a huge beast with the lower body of a horse supporting the upper body of a man: a centaur, five hundred pounds of muscle, and this one, Bradwarden by name, was merely a boy, Mather knew.

A boy, but an impressive sight no less!

Hardly slowing, howling with glee, the young centaur ran up the goblins back, trampled the ugly thing down into the dirt, then, as he came up above its head, he lifted his hind legs and stomped down hard, splattering the goblin's skull.

Mather didn't see it; having all faith in his half-equine companion, the elven-trained ranger was already in pursuit of the first goblin, running hard up the ascent, then leaping atop the stone wall, and then leaping far from it with graceful fluid movements. Mather was closer to fifty years of age than to forty, but he moved with the agility of a far younger man. Though he had spent the majority of his life in the harsh climate of the Timberlands, serving as silent protector for the folk of the two small towns in the region, Dundalis and Weedy Meadow, he felt few aches in his old bones and muscles.

From the top of the ridge, Mather saw spread out before him a familiar vale of man-height spruce trees, triangular green dots among a field of white ankle-deep caribou moss. And there was the running goblin — and indeed it was a quick one! — scrambling along, cutting sharp corners about the trees, stumbling often, and half the time turning right around in a circle as it tried to keep its bearings in this vale where all the trees looked the same.

Down went Mather in a rush. The goblin spotted him and squeaked pitifully, then ran in a straight line away, to the south, and up another slope. As it neared the top, the foliage changed back to deciduous trees, small growth and scrub. The goblin slipped into one tangle of birch and peered back anxiously.

"If you're waiting for your friend, you'll be waiting a long time, I fear," came a voice behind the goblin. Mather's voice.

Mather's blade swerved left, then right, and the goblin's club moved with it, in line to block.

But Mather knew Bi'nelle dasada, the elven sword dance, and the goblin did not. The side-to-side movements were naught but feints, for this fighting style, so unlike all the others of the day, focused on the movements forward and back. His lead foot perpendicular to his trailing, bracing foot, his front knee bent and his weight out over it, Mather waved the blade again, and then, before the goblin could recognize the move, before it could react with the club, before it could even blink, Mather's elven blade, Tempest, stabbed forward, seeming to pull all of his body, extending, extending, past the goblin's meager defenses, through the goblin's torso, to crack hard against the tree trunk behind the creature.

Mather let go of the blade.

The goblin did not fall, even as the last life left it, held firmly in place by the embedded sword.

Mather glanced to the south, down the slope to the tiny village of Dundalis, nestled in the vale beyond. The day was early and bitterly cold, and none of the folk were about, though Mather could see the glow of the morning fires through several windows. They wouldn't see him, though, and wouldn't know what he had done here this morn. They knew nothing of goblins, these farmers and woodcutters. Indeed, goblins were rare in these parts; this trio were the first ones the ranger had seen in several years. But that only made them doubly dangerous to the unsuspecting folk of Dundalis, Mather realized. Goblins were not so difficult an enemy when they were caught by surprise, as Mather and Bradwarden had done. They were cowardly creatures, and purely selfish. Thus, when surprised, they would simply scatter. But if they got the upper hand, if they ever found Mather and Bradwarden's camp instead of the other way around, then the ranger and centaur would indeed find a difficult fight on their hands. And if the goblins ever managed an ambush on the sleepy town of Dundalis …

Mather shook the unsettling images away, but not after wondering if he should try, at least, to better educate and thus prepare the folk of the village for that grim possibility. The notion merely brought a chuckle to his lips. The folk would never listen. To them, goblins were but fireside tales. Mather looked at the dead creature. Perhaps he should bring it and its companions into the town to show them. Perhaps …

No, the ranger realized. That was not his place, and the ramifications of such an action could be disastrous — everything from scaring half the folk back to the civilized southland to bringing an army up from Palmaris, a force that would despoil all of this nearly pristine land.

Let the folk remain oblivious. And of the ranger, their secret protector, let the folk continue their perception of him as a mad hermit, an eccentric woodsman, to be shunned whenever he ventured among them.

Better that way, Mather thought. He was performing as the elves had trained him. As he had learned all those years ago in the elven homeland of Caer'alfar, he did not take his satisfaction in accolades. Mather's strength came from within.

He grasped Tempest in both hands and yanked it free, then wiped the shining blade on the ragged clothes of the fallen goblin. He grabbed the ugly little creature with one hand and went down to the north, back into the pine vale, dragging the goblin behind him. By the time he found Bradwarden, the centaur had the other two goblins the pair had killed this day piled with a mound of sticks and dead branches, ready to burn.