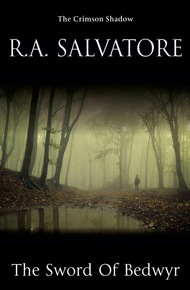 The Sword of Bedwyr - The Crimson Shadow by R.A. Salvatore

Luthien Bedwyr of Isle Bedwydrin, was raised as a noble and a warrior. Trained to fight in the arena in gret sporting events. When Viscount Aubrey, cousin of Duke Morkney of Montfort, visits the island, Luthien's world is turned upside down. After defeating his friend, Garth Rogar, in a match, Luthien is told to kill him by the visiting Viscount Aubrey, as is his right, but a practice never employed. A horrified Luthien refuses, but one of Aubrey's monstrous cyclops guards kills Garth Rogar anyway, launching Luthien on a great adventure for revenge and also to justly reshape the world. Along the way, he meets a most unusual halfling named Oliver deBurrows, a character Salvatore claims as his favorite comedic relief character of all, often describing the irascible Oliver as a cross between Inego Montoya of "The Princess Bride" and the little French guy on the wall in "Monty Python's Holy Grail."

THESE ARE THE AVONSEA ISLANDS, rugged peaks and rolling hills, gentle rains and fierce winds blowing down from the glaciers across the Dorsal Sea. They are quiet Baranduine, land of folk and Fairborn, land of green and rainbows. They are the Five Sentinels, the Windbreakers, barren peaks, huge, horned sheep, and multicolored lichen that grows eerily when the sun has set. Let all seafarers beware the rocks of the channels near to the five!

They are Praetoria, most populous and civilized of the islands, where trade with the mainland is the way and cities dot the countryside.

And they are Eriador, untamed. She is a land of war, of hardy folk as familiar with sword as with plow. A land of clans, where loyalties run as deep as blood and to fight a man is to fight all his kin.

Eriador, untamed. Where the clouds hang low over rolling hills thick with green and the wind blows chill, even in the height of summer. Where the Fairborn, the elves, dance atop secret hills and rugged dwarves forge weapons that will inevitably taste of an enemy's blood within a year.

The tales of barbarian raiders, the Huegoths, are long indeed, and many are the influences of that warlike people on the folk of Eriador. But never did the Huegoths hold the land, never did they enslave the folk of Eriador. It is said among the clans of both Eriador and the barbarian islands that one Eriadoran was killed for every slain Huegoth, a score that no other civilized people could claim against the mighty barbarians.

Down from the holes of the Iron Cross came the cyclopians, one-eyed brutes, savage and merciless. They swept across the land, burning and pillaging, murdering any who could not escape the thunder of their charge. And there arose in Eriador a leader among the clans, Bruce MacDonald, the Unifier, who brought together the men and women of the land and turned the tide of war. And when the western fields were clear, it is said that Bruce MacDonald himself carved a swath through the northern leg of the Iron Cross so that his armies could roll into the eastern lands and crush the cyclopians.

That was six hundred years ago.

From the sea came the armies of Gascony, vast kingdom south of the islands. And so Avon, the land that was Elkinador, was conquered and "civilized." But never did the Gascons claim rule of Eriador in the north. The great swells and breakers of the Dorsal Sea swept one fleet aground, smashing the wooden ships to driftwood, and the great whales destroyed another fleet. Behind the rallying cries of "Bruce MacDonald!" their hero of old, did the folk of Eriador battle every inch for their precious land. So fierce was their resistance that the Gascons not only retreated but built a wall to seal off the northern lands, lands the Gascons finally declared untamable.

And with Eriador's continued resistance, and with war brewing among some of the other southern lands, the Gascons eventually lost interest in the islands and departed. Their legacy remains in the language and religion and dress of the people of Avon, but not in Eriador, not in the untamable land, where the religion is older than Gascony and where loyalty runs as deep as blood.

That was three hundred years ago.

There arose in Avon, in Carlisle on the River Stratton, a wizard-king of great power who would see all the islands under his rule. Greensparrow was his name, is his name, a fierce man of high ambition and evil means. And evil was the pact that Greensparrow signed with Cresis who ruled the cyclopians, appointing Cresis as his first duke and bringing the warlike one-eyes into Greensparrow's army. Avon became his in a fortnight, all opposition crushed, and then did he turn his sights on Eriador. His armies fared no better than the barbarians, than the cyclopians, than the Gascons.

But then there swept across Eriador a darkness that no sword could cut, that no courage could chase away: a plague that whispers hinted was inspired by black sorcery. None in Avon felt its ravages, but in all of free Eriador, mainland and islands, two of every three perished, and two of every three who lived were rendered too weak to do battle.

Thus did Greensparrow gain his rule, imposing a truce that gave unto him all the lands north of the Iron Cross. He appointed his eighth duke in the mining city of Montfort, which had been called Caer MacDonald, in honor of the Unifier.

Dark times there were in Eriador; the Fairborn retreated and the dwarves were enslaved.

That was twenty years ago. That was when Luthien Bedwyr was born.

This is his tale.