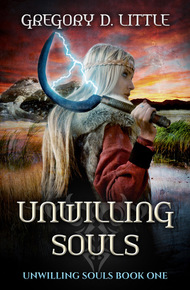 Rocket scientist by day, fantasy and science fiction author by night, Gregory D. Little's short fiction can be found in various anthologies including A Game of Horns, Dragon Writers, and the forthcoming Undercurrents. He is currently working on his YA Epic Fantasy series Unwilling Souls, set in a world where technology is powered by the souls of the dead, the gods are locked away in the hollowed out center of the planet, and what remains of humanity has rebuilt its cities out of the corpses of the great beasts that destroyed them.

Gregory D. Little is a member of and regular contributor to the Fictorians writing blog. He lives with his wife and their Labrador retriever.

Ses Lucani has never known her parents. Powerful leaders in the cold war left over after the gods' imprisonment, Ses's mother and father are now bitter rivals, each pretending their secret daughter doesn't exist. Raised by her grandfather, Ses now lives in the hollowed-out center of the planet and learns to forge wrightings, tools imbued with soul energy and used to maintain the prison of the gods.

When terrorists attack the prison on her sixteenth birthday, Ses is forced to flee after the ensuing investigation reveals the secret of her parentage. Suddenly, the very parents who abandoned her may be the only people she can trust. Running from government operatives and fanatic cultists, Ses meets Murien, a boy with fingers in a shadowy network that can lead her to her father.

But some secrets are darker than parentage. On her way to find her father, Ses will uncover truths about her family and herself that will shatter her understanding of the world and risk the return of the gods themselves.

But Ses didn't stop. She began to jog up the bone tunnel, cringing away even as she brought the amplifier up. She heard a shout, an order to draw weapons.

Whatever you do, don't point it at yourself. She was scared enough as it was.

When she triggered the release, the effect was immediate and indiscriminate. The passengers closest to her began shrieking and batting the air, curling themselves into tight balls of limbs and begging for mercy. The attendant burst into tears and began clawing at the nifeglass pane of one of the spinewalker's windows in a panicked bid for escape. From somewhere close the rank smell of urine pinched the air as someone wet themselves. The amplifier had magnified Ses's fear tenfold and projected it outward, where it latched onto everyone it touched.

The polistraat handled it better than the passengers. Two of the five dropped their stunners and shied back, mouths slack, as though being charged by a still-living spinewalker instead of a sixteen-year-old girl.

One of the remaining three attempted to shove his comrade at Ses, as though offering the woman up as a sacrifice to an angry god. The victim-to-be did not take kindly to being volunteered. She turned, wild-eyed, and decked the officer who'd shoved her with a mailed fist.

The gaunt wraith of a man stared at Ses with widening eyes and a mouth going slack. But he held his ground. Ses was lowering her shoulder in a desperate attempt to barrel past him when the pair of fighting officers did the job for her. Ses heard the sharp click of the too-tall man's head striking the bone ceiling, then he collapsed in a groaning heap on the floor.

No matter what they were doing, everyone shied from Ses as she approached. She wasted no time in bolting through the open hatch and onto the gangplank, meaning to break into a sprint until a bolt of hot agony interrupted her brain's commands to her legs. She fell to her knees and then to one shoulder, rolling to protect her precious amplifier from the impact. Her breath left in a rush and spots danced in her vision for the second time in as many minutes.

"Not so fast, miss." Breathing was painful after whatever had struck her, but Ses managed to rise back to her knees. The point of an agonizer hovering between her eyes brought her up short.

Though he barely stood taller than Ses managed on her knees, the little officer was a tribute to the word "haughty." His face was round and lumpy. A wiry black goatee overflowed his chin and ran all the way down his pasty neck, as though to cover his burgeoning jowls.

This close, Ses could smell a cloying perfume clinging to the man. It coupled with the agonizer's lingering pain to make her vaguely dizzy. Officer's crescents made up his rank insignia.

He's the one in charge.

"I'm quite impressed," the little dictator said. "You made it past five officers in very tight confines." He glanced at her amplifier but there was no recognition in his piggy eyes. "I very much look forward to learning how."

Ses feebly pointed the amplifier at him, a motion that seemed to annoy the officer, but nothing more. It was drained. The world went briefly white again as he traced the agonizer's tip across her cheek in a burning line, as though she'd dipped half her face into the Pit's magma.

Ses had seen plenty of agonizers in the last six months. Master Glinn preferred hand-forged wrightings to Bottled Shock, but polistraat were only supposed to carry the stunner wands now. Like all things Bottled Shock, stunners were simpler to build and maintain.

The other five officers had all had stunners. Perhaps there was enough wiggle-room in the rules to allow sadists to keep their toys. Seeing the man's eyes shining with growing eagerness, Ses very much feared she was right.

"Now behave," the officer prodded. "You'll have plenty of time to misbehave once you're in custody."