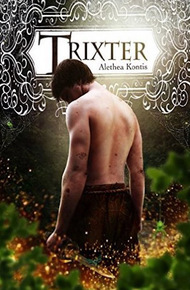 New York Times bestselling author Alethea Kontis is a princess, storm chaser, and geek. She is the host of "Princess Alethea's Fairy Tale Rants" on YouTube and Princess Alethea's Traveling Sideshow every year at Dragon Con. Alethea narrates stories for multiple award-winning online magazines, and she contributes regular YA book reviews to NPR. She currently resides on the Space Coast of Florida with her teddy bear, Charlie. Find out more about Princess Alethea and the magic, wonderful world in which she lives at patreon.com/princessalethea

Trix Woodcutter is the long prophesied Boy Who Talks to Animals. He's also a foundling prankster scamp who places his family under a sleeping spell so that he can run away from home. Compelled by a vision of his dead birthmother, Trix departs on the eve of a Great Catastrophe, only to find himself caught in the maelstrom. Armed with little more than his wits and the wisdom inherent in all fey-blooded youth, Trix confronts a legendary Animal King, faces off against a ghostly feline, rescues a damsel in distress, and discovers more about himself than he ever wished to know.

And this adventure is only the beginning...

Alethea Kontis is a multi award-winning author known (among other things) for her unique take on fairy tales. Trixter is a mixture of the familiar and the unexpected, in true Alethea style. – Charlotte E. English

Trix knew what dreams looked like, the real dreams, the ones he was meant to pay attention to. They had more in them than the nothing-dreams of restless nights: more color, more feel, more sound, more taste, more cohesiveness, more details, more memory than memory. Real dreams did not fade upon waking but instead became more vivid, replaying themselves over and over in the mind's eye until the brain teetered on madness with the vision. Real dreams came from the gods. The gods knew how to make a point.

The gods also knew how to abandon someone in their time of need.

Trix would never have been able to convey the urgency of those dreams. The journey to Rose Abbey was one he needed to make immediately and alone. There was also a very good chance that the spell he'd put on the stew wouldn't work. It's not as if he had tried such a thing before—

Oh, the spell had definitely worked. Perhaps a little too well. Shame, too, because that stew had smelled delicious—one of his better accidental concoctions.

"It would have been nice to leave on a full stomach," he said, before recalling that no one was around to hear him.

Between the Woodcutter family and his animal friends, Trix was never alone in the world. And yet tonight there did not seem to be a soul within sight. Trix heard barely a cricket chirp above his ragged breathing. The twilight he escaped into offered a rare solitude. It was at the same time peaceful and concerning.

A silent Wood, in the main, usually meant trouble.

Trix stumbled again, forced himself back to standing and stayed there for a moment, listening. The wind had picked up.

Trix glanced over his shoulder—he could still make out the very top of the Woodcutter home just above the whipping, writhing grasses of the meadow. Dark clouds gathered in the west, swallowing the sun, but not before something in the tower window caught the fading light and flashed it back at him, like a lighthouse beacon on a foreign shore.

The world fell completely silent then, as if Trix had stopped his ears with beeswax. The leaves were silent, his breath was silent, his heartbeat was silent. Even the wind was silent.