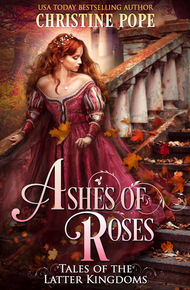 USA Today bestselling author Christine Pope has been writing stories ever since she commandeered her family's Smith-Corona typewriter back in grade school. Her work includes paranormal romance, cozy paranormal mystery, and urban fantasy, among others. She makes her home in New Mexico.

USA Today bestselling author with more than half a million books sold.

Ashes of Roses by Christine Pope

Even the Emperor of Sirlende cannot always do as he pleases, but when custom demands he find another bride after the death of his betrothed, a princess he barely knew, Torric Deveras defies his counselors and changes the rules rather than make a loveless marriage.

Ashara Millende is the only daughter of a nobleman, but had her inheritance stolen from her by her unscrupulous stepmother. A servant in the house that should have been hers, she dreams of escaping the drudgery of her life and finding someone who will love her for who she truly is.

When Torric invites all the marriageable women in his kingdom to a five-day holiday of feasts, tournaments, hunts, and balls so that he might choose an Empress from among them, Ashara never dreams that she can attend, much less catch his eye and win his heart. Then a woman with hidden secrets appears who will give Ashara the chance to win her heart's desire — if only she is bold enough to take the first step.

Cinderella reigns as one of the best-loved stories of all time, and Christine does full justice to it in this sumptuous retelling. This gorgeous book is part of a whole series of old, beloved tales beautifully retold, and if you love fairy tales as much as I do it's sure to enchant you, too. – Charlotte E. English

For some reason, I could not stop thinking of the proclamation posted on the wall only yards from where I lay. How many would answer its summons? Of course there would be some who would not attend, those who were already betrothed, or whose families perhaps could not bear the expense of a venture with such low chances of success. Even so, I guessed it must be hundreds, and wondered how the Emperor would ever choose from among so many.

Still, it would be quite something to see so many noble young women gathered in one place, and something even more to see the Emperor himself. He was young, only some six years older than I, and I had heard he was the handsomest man in all of Sirlende. This I guessed must be an embellishment, for of course those wishing to curry favor would say he was a veritable paragon, even if the reality did not quite match their compliments.

But it would have been nice to see for myself.

I sighed, and rolled over onto my side, although I knew that position was even less comfortable than lying on my back. Long ago I had given up trying to sleep on my stomach, for then it seemed as if I only inhaled the musty odor of the straw, and ended up sneezing for half the night.

Something seemed to move in the quiet kitchen, and I thought I heard a whisper of my name. "Ashara…"

I sat up, clutching my blankets to my breast, telling myself it must be Claris coming in from her quarters down the hall. But I had never heard the cook sigh so, and as I blinked into the darkness, I saw that the woman who now stepped out of the shadows near the back door was far more slender than Claris, who had an unfortunate tendency to over-sample her own wares.

"Who's there?" I asked in a harsh whisper, even as I reached out for the fireplace poker. My fingers wrapped around the cool metal, but I stopped at the stranger's next words.

"I am your Aunt Therissa."

Startled, I still managed to say, "I don't have an aunt. Neither of my parents had any brothers or sisters."

She stopped by the sideboard, and the candle in its holder there was suddenly alight, although I had not spied her picking up a match. Despite the dimness of the room, I could see enough of her, see a pretty woman of perhaps forty-five, her dark hair in a long braid wrapped like a crown around her head, drops of silver hanging from her ears. From what I could see of it, her gown appeared to be of good quality, although not overly elaborate.

All in all, she looked quite respectable. That didn't explain what she was doing in my stepmother's kitchen in the middle of the night.

"No, Ashara," the strange woman replied, and her tone was sad, even though I could not guess at the reason why. "I am your mother's older sister, although I suppose she never spoke of me."

"No, she did not." Pushing away my one thin blanket, I got to my feet and faced her. We were of a height; my eyes met hers directly. "So why should I believe that you are who you say you are?"

She did not reply directly, but only looked at me for a few seconds, then said, "Ah, you are so like her, Ashara. What a beauty she was, and that hair! Oh, how I envied her that hair. I always hoped a child of hers would inherit it."

Without thinking, I ran my fingers down the thick braid which hung over my shoulder. It was a dark, rich red, exceedingly rare in Sirlende, where not one child in ten thousand would have locks of such a hue, where most everyone had hair in shades of brown and black. My stepsisters resented my hair, and my stepmother made sure I covered it with a kerchief every day of my life. It was too distinctive, I supposed, something that a person would remember. And if someone ever recalled that Lord Allyn Millende's lost daughter had hair that color…well, it might lead to questions my stepmother would no doubt not wish to answer.

"So you say you are my mother's sister," I said, keeping my voice barely above a whisper, lest we awake Claris where she slept just down the short hallway off the kitchen. "Why, then, have you come to me now? For I daresay you would have been of far more help to me ten years ago, when Father died and I was left to the mercies of my stepmother."

Surprisingly, tears glittered in the woman's dark eyes. "If I had known, I would have come. I have just returned to Sirlende after traveling the continent for the past twenty years or so. When I left, my sister had just married her beloved Allyn, and I thought all was right in her world." A sigh, and she added, "Now that I am here, I find that nothing much is right at all. But I wish to repair things, if I might."

She spoke clearly, and I winced, sure she would bring Claris down upon us at any moment. Whispering, I said, "We must be careful, or you will wake the cook. She sleeps not twenty paces over there." And I pointed in the direction of the corridor that led off the kitchen and to the pantry and the small chamber the cook occupied.

Incongruously, my aunt smiled, and waved an airy hand. "Oh, you needn't worry about that. She will not wake any time soon, and neither will that amiable but none-too-bright young man out in the room off the stables."

I wondered how she knew they wouldn't wake — and how she knew where Janks slept at all. My stepmother, following her own odd notions of propriety, would not allow her footman to sleep in one of the cramped rooms just below the attic, but had him reside in the small lean-to attached to the stables, where once upon a time the horse-boys must have lived. But we kept no horses, so that space was empty enough.

"I wouldn't be so sure," I replied, keeping my voice pitched low. "Claris is quite the light sleeper. More than once she's caught my stepsister Jenaris coming down to raid the larder at midnight."

A little tinkle of a laugh, and my aunt said, "Truly, there is no need to fear. I have made quite sure that they will not wake before morning."

"You have?" A sudden fearful thought went through my mind. "You didn't — that is, you haven't drugged them, have you?"

"Of course not. I only worked a simple sleep charm."

"Oh, for goodness' sake." Her dark eyes flashed. "But of course I suppose I shouldn't be surprised that you would have the same narrow-minded beliefs as the rest of your countrymen, with no one around to teach you differently. My fault, perhaps, but I think no one with an open mind could blame me for leaving Sirlende to go to more…accommodating…locales." She crossed her arms and gazed at me frankly, then said, "I am not a witch, Ashara. I am a user of magic, mage-born. Some might call me a sorceress, but I fear my talents aren't quite grand enough for me to claim that title."

These revelations left me staring at her, open-mouthed. Magic was something never discussed, the penalty for its use death…here in Sirlende, at least. I had been told that all those who bore the taint of magic in their blood had long since died off, but there were always whispered rumors of those who could still cast spells, if you knew where to look. Since I could not even venture beyond the street where I lived, I'd had no opportunity to go seeking these illicit users of magic…assuming they even existed.

But here now was this woman who claimed to be my aunt calmly announcing that she possessed such powers, and had in fact charmed the only other two occupants of the property into a deep sleep…so we should not be disturbed. And there had been the matter of that candle which had mysteriously lit itself…

"What do you want?" I asked, and told myself that my voice hadn't shaken that much, not really.

"To make things right, my child. I had to leave, lest anyone discover what — who — I was. And I do not regret the knowledge I gained while I was away. But to find that my sister has been dead all these years, and her child practically a slave in the household of a woman not fit to wipe the soles of her shoes — well, that has caused me a good deal of regret. And I want to repair things."

"How on earth can you do that? Are you going to take me away from here?" It was perhaps an indication of my desperate desire to get away from my stepmother that I would even entertain such a notion, user of magic or no.

"No, my dear." She smiled, and looked on me with fond eyes. "Something even better.

"I'm going to make you Empress of Sirlende."