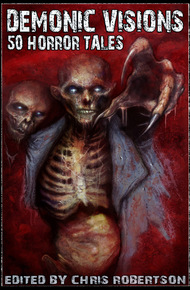 Chris Robertson is the editor of the series Demonic Visions 50 Tales of Horror. He wrote and directed the feature length film “Disposal of a Corpse”, and has had his speculative fiction published in Monomyth Magazine, Doorways Magazine, and various anthologies.

Welcome to volume one of the Demonic Visions 50 Horror Tales series. This book features short horror tales by some of the best horror writers from around the world. Each book within the series will feature new work by each of these writers, both the established, and new up and coming talent. Volume one features tales of cannibalism, murderous underworlds, zombie carnage, portals to alternate dimensions, and many, many more demented masterpieces. So enjoy, and I hope that you will join us for the entire Demonic Visions saga which is intended to last many, many years and span many, many volumes...

"Some of these stories are creepy enough to literally make your skin crawl! Keep your phone next to you with your safety person favorited, because you'll need someone to bring some light back into the room where you're reading this. Bound to zero in on at least one of your phobias and twist the knife a little harder..." – The Dead Redhead

"And how old were you when you died, Mister Beauchamp?" Joan Rothman asked, leaning back in her chair. The scientists watched her behind the one-way mirror, hands clasped behind their backs.

"Twenty-seven," the corpse replied, more gurgle than speech, as it gazed idly around the interview room. Joan jotted down the response, then chewed pensively on the tip of her red pen. The lights flickered as the air circulators shuddered to life in the depths of the bunker, filling the observation room with a faint scent of bleach and formaldehyde.

She crossed her legs and rested the clipboard between her knee and the folding table, unknowingly flashing her slip to the men behind the mirror. Bhim Raychaudhuri smiled appreciatively at the view and spoke into the microphone wired to her ear bead. "Math, Miss Rothman."

"Thank you," she said to the creature, making no sign that she’d heard the command. "And how old are you now?" She poised the pen above the clipboard.

The corpse scowled, the pallid flesh of its forehead wrinkling in concentration under the single naked bulb. "What year is it?"

"And I died in two thousand twelve?" it asked, wheezing.

"As near as we can tell, Mister Beauchamp."

It grunted, a flatulent gasp of rotten breath, and scowled down at its manacled hands. It shifted its weight in the folding chair, and its good eye lolled up to look at her face. "I’m hungry."