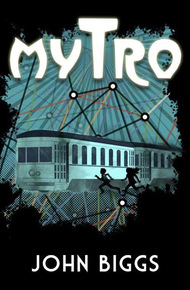 John Biggs lives with his family in Brooklyn, New York where he and his kids think up new adventures for Turtle and Agata.

Imagine if, right now, clattering underneath your feet was a secret train system that could take you anywhere in minutes. Imagine a trip full of mystery and excitement from New York to Barcelona to the wind-swept coast of Italy to the edge of space. Imagine dangerous strangers, amazing friends, and high adventure.

The first book in the Mytro trilogy, this thrill ride of a story follows Turtle and Agata as they learn the secrets of a mysterious group trying to control the world and the strange creatures that could destroy it.

The Door in the Rock

Huffing and puffing, Turtle Fulton ran another few feet while the Kincaid twins, Nate and Nick, Nick, with his long, wavy blonde hair, and Nate, with his short blonde buzz, came up behind him, barely winded. They were running a practice race in Central Park, and as the slowest member of the school'Äôs already slow track team, Turtle expected the brothers to laugh as they roared past. Instead, they turned around to look at him and then veered off into some bushes. They waited there while Turtle ran at his own pace, slow and steady. His real name was Paul but his plodding gait gave him his nickname. He didn'Äôt mind it. Slow and steady won the race, after all.

Turtle ran a few more feet, counting his footsteps in his head as he ran, breathing out on every prime number between 2 and 11'Äî2, 3, 5, 7, 11'Äîa trick he used to keep himself distracted on the longer runs. His track coach said he was good at distances, and exercises like this made him better, but the Kincaids were always faster and always first.

Now, they were doing something weird.

As he stopped to glance back, he saw them turn and rummage through a cluster of tall green bushes topped by purple flowers growing on the face of a towering rock. They moved farther into the greenery, submerging themselves like they were hiding. Weird, yes, but Turtle kept running'Äîuntil the rustling stopped.

Turtle halted midstride. From out of the bushes came something that sounded like a surge of wind , and when Turtle turned to look again, the twins were gone. They had vanished into the bushes.

Where did they go? What was that noise?

He ran over to the rock, a few feet off the path. He could feel his heart rate rising, his pulse booming in his ears. The scent of the flowers on the bushes was strong in the air, even over the sharp smell of fresh asphalt coming from somewhere nearby.

Scratching his shoulder through his Manhattan Friends Track Team T-shirt, Turtle tried to think. A jackhammer that had been thrumming through the air stopped, and the trill of birds replaced it in the quiet. Somewhere over a low hill, Turtle heard the sound of traffic'Äîthe whine of hydraulics as a bus stopped, a horn beeping once in warning, the rev of a high-powered motorcycle peeling out into the street. The rest of the team was somewhere far ahead, but there were more pressing matters.

Where could the Kincaids be?

Turtle parted the bushes, convinced the twins were hiding there, somewhere, but it took only a few seconds to confirm what he had suspected: the boys were gone.

The stone behind the bushes looked like the wall of a forgotten, ruined castle, the edges chiseled roughly at right angles and the cracks filled with brown dust. Someone had carved the number 13 into the rock, although the carving was old and worn down to near invisibility. It reminded him of the vague, permanent graffiti that Turtle had become used to seeing in the city, although this was a bit tamer than some of the stuff he had seen written on other Central Park rocks.

His grandmother had told him that all the huge rocks in Central Park had been quarried north of the city then brought in on horse-drawn wagons'Äîwhat a wild thought. This rock alone was a monster. Bigger than a small house, it had been taken from the earth and placed here as a decoration.

As the jackhammer pounded again, drowning out the sound of Turtle'Äôs own heartbeat, he reached out to feel the cold rock and the grit of the mud that had sluiced off the top and dried on its surface. There was nowhere for the twins to have gone. Wiping his sweaty brow, Turtle faced a blank wall of stone, his hands searching for hidden handles or buttons.

Was this a magic trick? he thought.

Waffle-patterned footprints scuffed the dust at the base of the wall, and Turtle saw the faint imprint of a Nike swoosh in a patch of drying mud. He put his own foot next to the fresh track; it was about his size'Äîand about Nick'Äôs and Nate'Äôs size too. So they had been here. He wasn'Äôt dreaming.

Turtle turned around. The grass leading up to where the twins disappeared was worn away, and the dirt showed through. The park had always been crisscrossed with little, informal walkways, but this was the first time Turtle had seen one end at a blank stone wall.

Turtle knew you weren'Äôt supposed to follow paths in Central Park for a couple reasons. First, you weren'Äôt allowed to walk on most of the grass, and second, it was supposedly dangerous. As he stared at the rock and the little path that led up to it, Turtle felt a sense of dread'Äîand excitement.

In the distance, someone laid on a car horn, long and loud. Turtle ignored the circus of sound that surrounded him and wondered if the twins had climbed to the top and over.

Slowly, cautiously, he rubbed his hand along the surface of the stone again'Äîfeeling foolish. He was dead last in the practice race; the rest of the team was already far ahead.

Just as he was about to give up and resume running, Turtle felt a deep rumble under his feet. He placed a hand on the cold stone surface and listened. He felt it more than heard it, but there it was'Äîthe rumble again, like a train roaring by. He put his ear against the rock wall and it was louder'Äîclack clack ... clack clack'Äîa subway train rattling on iron rails, a sound that was so impossible to miss that it gave him a chill.

There was a train behind the wall.

Engrossed, Turtle didn'Äôt notice that he was falling forward until the rock face gave way, moving inward on invisible hinges. Dust cascaded down on him as he started to fall, he held out his hands to break his descent, but there was nothing to stop him, just a rush of air.

He was inside the rock.

The door shut quickly behind him with a mighty whoosh.

He had popped through and onto a subway platform. On this side, the door he had fallen through was clad in heavy wood and held together with polished iron bands. The iron was beautifully wrought and the wood was covered in delicate carving, the planks polished to a bright golden sheen. Birds took wing from long grass carved in the rich, deep wood. Everything was carved in deep relief and with great care. Sharp letters along the top of the door read: 'ÄúCentral Park South.'Äù

Turtle tried to push his way back out, but the door wouldn'Äôt budge.

The clack clack was wildly loud here, and Turtle took a quick breath and crouched down, ready to run. But where? The door behind him was closed and the platform was only about fifty feet wide and ten feet deep.

Turtle stared, dumbstruck, at the twins, who just stood there like they were waiting for the train. They hadn'Äôt noticed him. Something was coming down the tunnel. The wind and dust picked up and filled the platform with noise.