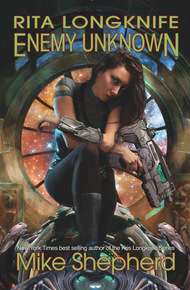 Mike Shepherd is the New York Times National best-selling author of the Kris Longknife saga. Mike Moscoe is the award nominated short story writer who has also written several novels, most of which were, until recently, out of print. Though the two have never been seen in the same room at the same time, they are reported to be good friends.

Mike Shepherd grew up Navy. It taught him early about change and the chain of command. He's worked as a bartender and cab driver, personnel advisor and labor negotiator. Now retired from building databases about the endangered critters of the Northwest, he's looking forward to some fun reading and writing.

Mike lives in Vancouver, Washington, with his wife Ellen, and not too far from his daughter and grandkids. He enjoys reading, writing, dreaming, watching grand-children for story ideas and upgrading his computer – all are never ending.

The war is over. Hurray! Half the fleet is back in mothballs. But out on the rim of human space, ships are disappearing. Some are merchant ships going about their business. Others are exploration ships on deep space probes. What's happening to them?

Captain Rita Nuu Longknife is ready to take the heavy cruiser Exeter to space and see what's out there. She may have a nursery next to the captain's cabin and a two-month-old baby on her hip, but she's taking a warship out there, and nobody better get in her way.

Mike included in the bundle the gripping Rita Longknife–Enemy Unknown, an alien contact story where the contact goes horribly wrong. A real page-turner of a novel I can promise you. – Dean Wesley Smith

General Ray Longknife liked it when a plan came together, and with Rita, no, Captain Rita Nuu-Longknife, shoving from one end of the string, and Admiral Zilko pulling from the other, the fitting out of the Exeter and the Northampton moved along quickly.

Rita would skipper the Exeter with several of her old crew from the Friendship as well as a whole slew of newly commissioned officers from the ranks of the flight officers on the transport. By Ray's count, fully one half of the crew of the Exeter and a quarter of those on Matt's Northampton were from the ranks of the transport crews. When you added in another twenty to twenty-five percent that had signed on as farm technicians, his heavy cruisers would have close to a wartime complement in a fight.

Ray checked, Ursel Jannson was on the Exeter along with now Lieutenant Hesper from Rita's old Friendship as sensor officer.

Ray made sure things were as shipshape as an Army type could make them for Rita's first visit to her command.

She came, in the full-dress blues of a Navy captain with all the medals she'd earned herself in the war . . . and with little Alex on her hip right up until the time she was about to cross the brow of her ship.

Then Alex went into the ready arms of his nanny. Rita paused to adjust the fall of her dress blues, and crossed right over to salute the flag, then the OOD, and smartly said, "Permission to come aboard."

"Permission granted, Captain," Lieutenant Hesper said with a straight face, thought she must have been biting her lip to keep the biggest grin from sprouting until the full honors had been rendered.

Then the two of them in a most un-Navy like fashion, clapped each other into a huge hug. "Oh, I wish Cadow had lived to see this day," Hesper said. "He said we gals would never make it in the real Navy."

"Yes, God rest his soul," Hesper answered as they broke from the hug.

"Well, Ray, you ready to show me to my bridge?"

"I told you if you wanted to go gallivanting once the baby was born, that he and I were coming with you."

"Yes, you did, Captain," Ray admitted, though, until this moment, he'd quite forgotten the threat.

"A kid on a ship?" Ray managed not to squeak.

"Yes." Ray said, with no comprehension but suspecting it wouldn't be long in coming.

"Well, way back in the age of sail, chief gunner's mates and captains got to bring their wives along. A real 'son of a gun' was the kid of a gunner's mate, conceived and born on the gun deck of a ship of the line. Well, Alex may not qualify as a son of a gun, but he's going to be the son of the skipper for as long as I'm nursing. Maybe longer."

"Yes, ma'am," Ray said. He knew when a fight was lost before it was joined.

"Did you have the extra ice armor added around the bridge and officer's country?"

"Yes, I did," Ray said, the reason now dawning on him like a thunder clap. Light cruisers carried up to a meter of armor ice. Heavy cruisers had as much as a meter and a half over their vitals. Battleships laid it on as thick as three meters.

The Exeter now had two meters of ice over the work areas and quarters where Rita and baby Alex would spend their time. Ray had wondered at the work request. If he'd asked then, he would have been saved the dumb questions now.

An ensign took the nanny in tow and the trio disappeared while Ray took Rita on a tour of her new ship. It was quick; he'd seen his wife deep in the study of her ship's schematic for much of the last week. They covered every centimeter of the distance from engineering aft to the forward laser batteries in less than an hour with her as much in the lead as Ray.

And along the way, Rita introducing Ray to the crew. If they hadn't been on the old Friendship, they'd served in an attack transport in her old squadron and been under her command. As it turned out, quite a few of the 'farmers' were standing their watch for the captain's visit. And not a few of them knew Rita from squadron parties.

The farm workers were, as often as not, the sweethearts of the female flight officers.

"What are we going to do about fraternization aboard ship?" Ray whispered as they found themselves alone on the way from one compartment to another.

"This is the exploration service, isn't it?" Rita replied.

Ray swallowed and decided to let the ship's captain resolve that issue.

"Okay, everything appears to be ship shape," Rita said. "Let's see how she sails."

An hour later, they were smartly away from the pier, with the Northampton holding to its station, fifty klicks behind and offset to their right. They made a quick, one gee run out to the moon and back again. There was a gunnery range on the moon, and they tested the lasers there.

No surprise, what with the priority the ships had been given at Nuu docks, everything worked just as advertised.

They were back at the dock by that afternoon.

"You ready to send us to space, Ray? We're ready to go," the captain of the Exeter said.

"As soon as we have some idea of our target."

"Then get me some targets," his wife ordered.

Waiting at the pier as they docked were a whole series of surprises. The other three nannies were there with full baby paraphernalia, as was Rita's private nurse, now sporting the uniform of a Chief Corpsman.

Ray was kind of expecting them.

He hadn't been expecting the two keeping their distance from that group.

Andy Anderson was standing next to the spy in his crumpled silk suit. They came aboard first.

"We've got a problem. Whitebred has broken out the black flag and is taking ships," Andy reported.