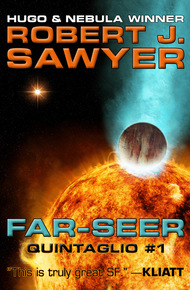 Rob's novel FlashForward was the basis for the ABC TV series of the same name, and he was a scriptwriter for that program. He also scripted the two-part finale for the popular web series Star Trek Continues. His column "Decoherence," about the state of the science-fiction genre, appears in each issue of Galaxy's Edge magazine. His 24th novel, The Oppenheimer Alternative, will be published in June 2020.

Sixty-five million years ago, aliens transplanted Earth's dinosaurs to another world. Now, intelligent saurians – the Quintaglios – have emerged. Afsan, the Quintaglio counterpart of Galileo, must convince his people of the truth about their place in the universe before astronomical forces rip the dinosaurs' new home apart.

Thunderbeast: a four-footed mountain of flesh; brown, with blue mottling on the massive back; an enormously long neck; ridiculously small head; pillar-like legs; a great whip of a tail.

And this one was a giant! To the thing's shoulder, it was eight times Afsan's height; to the top of its neck, now extended to browse leaves from the hamadaja trees around it, the beast stood fully twenty times as tall as Afsan. To walk the length of its tail would take forty paces.

The thunderbeast had not yet seen them. The neck was poking into the topmost part of one tree, defoliating it rapidly. These beasts spent most of their waking time eating, moving huge quantities of vegetation past their peg-like teeth, through their narrow throats, down those long, long necks, and into their rumbling guts.

The prey was ideally situated for the attack. About fifty paces away, it had walked partway into a loose stand of trees. Hamadajas had unbranching bone-white trunks that exploded into leaves only at their tops. The trees were evenly spaced, forming a natural pen for the creature. Only the tapering tail stuck out, free of obstructions.

Tetex looked left and right, sizing up her team. At last, she held up her arm and gave the rapid hand chops that signaled the attack.

Stealth was no longer required. The only easy way out of the valley was back up the hillside, and that was the direction from which the nine Quintaglios were coming. Tetex let out a roar, the massive sound erupting from her chest. She charged, back parallel to the ground, tail flying out behind.

Afsan followed. He was surprised to find himself roaring in excitement, too. The ground shook as the seven others charged, as well.

The thunderbeast's head was buried in the leaves. That would muffle its hearing, buying them a little time before the giant creature would respond.

Suddenly the end of the neck swung around, the tiny head and the dull brain within reacting slowly to the nine puny creatures barreling toward it. Afsan could see the black eyes—obsidian black, the most intelligent-looking thing about the animal—go wide in astonishment. The beast began to back away from the trees, each footfall sending a tremor through the ground. Afsan looked over his shoulder. Chubby Dybo, his gut in the running posture barely clearing the soil, was bringing up the rear.

Tetex was first to reach the thunderbeast. She leapt onto the animal's right flank just ahead of the rear leg. Her claws dug like pitons into the mountain of its abdomen. Rivulets of blood ran down the thing's sandy hide. One of the other experienced hunters arrived next, his greater stride letting him outrun Afsan. He, too, leapt onto the beast, his jaws digging into its flank. Afsan watched in amazement—

—which was a stupid thing to be doing. Suddenly, out of his peripheral vision, he became aware of a beige wall barreling along, slicing the air with a massive whoosh. The tail—no thin line from this close, but rather half the height of Afsan himself—came toward him. He turned and ran, trying to get out of its way, but it struck him from the rear, knocking the wind from his lungs.

His vision exploded into patterns of light. He felt himself being lifted up, knocked flying by the impact, and, heartbeats later, saw the ground far below. Afsan brought his arms up to cover his face. The hard ground rushed toward him—

—and all was blackness for an instant.

His whole body ached. He had landed in shrubbery, the thorns scratching his hide. His right leg hurt as he put his weight on it.

He was now thirty paces from the thunderbeast. The monster was slapping its side with its tail, attempting to dislodge the tiny Tetex. Several other members of the pack had secured themselves to the beast's side and were ripping chunks of flesh from it. Even round Dybo was gnawing at the thing's right rear ankle.

By the prophet, this was a monster! Afsan had never heard of a thunderbeast so big. Perhaps they had bitten off more than they could swallow whole.

No, thought Afsan. He would not fail at his first hunt. He would not. He tipped forward into the running posture and rushed toward the beast.