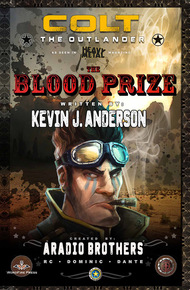 As seen in HEAVY METAL magazine

Colt the Outlander is a brash, tough, and ruthless bounty hunter, trying to make a living on the post-apocalyptic world of Neb-6. He has fast vehicles, big weapons, and two beautiful—and deadly—female companions.

What should have been a fun and profitable day of target shooting rodent-skorps in the canyons to collect their bounty turns into a blood quest for Colt and Brem, when they learn their companion Jenna has been shot down and seized by slavers from the overthrown mining station of Peridot Basin.

Now it's personal. Colt and Brem are off on the hunt … but Jenna herself may be more than the slavers can handle.

The badlands of Neb-6 sprawled out in a bleak but breathtaking vista of spiral canyons, tan rock spires, abandoned mining operations, and all-too-rare green oases.

Colt paid no attention to the alien view. His eyes were focused on the targeting cross.

Riding high in the open wind on the back of his hover-hog, Colt felt the massive levitation engines thrumming as he straddled the engines with his legs. He adjusted for the vibration as he squinted at the fine hairs, zeroing in on his target. He nudged the throttle to move in closer, and the Razorback sliced through the air like a knife sliding into the gut of a combative bounty.

The lens of the targeting cross focused in on the nasci, one of the hideous rodent-scorps that infested the canyons out near the isolated and automated power plant Dar-Zeta. Colt saw two males and a much larger female scuttling through the shadows of the ravine floor.

The critters were hideous: rat-like heads with arachnid eye clusters and sharp teeth, bodies covered with long venomous porcupine spines that gave them a round and fuzzy appearance … if seen from a distance and out of focus, with very poor eyesight. They had multiple articulated legs and a segmented, upcurved tail tipped with a deadly stinger.

"Ugly bastards," Colt muttered as he took aim. He had seen and tolerated plenty of ugly things before. The key point was that nascis were a pain in the ass, reproducing swiftly and chewing up power-transmission cables from the Dar-Zeta plant.

It seemed like a good day to do some cleanup and pest control. And target practice.

He lined up on the male on the left, the ugliest of the three, and wrapped his gloved hand around the familiar worn wood stock of the antique lever action rifle. He grinned so wide that he was just asking for bugs to cover his teeth.

Before he could fire, another shot rang out, an incinerating blast that struck the male nasci body core, splattering gooey meat all over the rugged canyon wall, as if someone had planted a grenade in the middle of an overripe melon. Multi-jointed limbs and the curved arachnid tail flew in all directions like twigs blown in a storm.

"Dammit, Brem!" Colt shouted. "That was my target."

The other two nascis scuttled in a panic, racing for shelter, and Colt frantically tried to line up his next target.

"I have never seen you hesitate before, Colt," said the slender beauty with long dark hair as she zoomed her hover-bike in beside his. She coolly aligned her sniper rifle for another shot.

"I wasn't hesitating. I was enjoying myself." He fired twice, annoyed that he was distracted enough to miss the other male until his second shot. He was careful to kill the thing, not vaporize it. No body, no bounty.

Calmly, Brem lined up the large female which had taken shelter among tumbled boulders. The female nasci was using her clawed legs to tear into the pebbles and dirt, excavating a safe burrow. From his angle, the shot was bad. Unable to hit the creature, Colt shot the boulder instead, splitting it in half.

Brem worked precisely with him. The instant after he fired, she sent a perfect shot that struck the female nasci's head, drilling through the rudi-mentary brain and killing it instantly. "Teamwork, Colt."

"Teamwork," he agreed. "I like it when we do things together. Lots of things."

"Let's round up the critters and pack them in the tow-pod," Colt said, wheeling the Razorback about in the air, skimming a hairsbreadth from the sheer canyon walls. As he dove down toward the dead nascis, Brem followed in her more-unwieldy Mamba, and the two came in to land on the canyon floor.

Back at the Crow's Nest, Colt's headquarters, their mechanic TK—for Tommy Kowalski—had repaired and modified the salvaged Mamba craft for Brem, a normally graceful hover-bike now made less aerodynamic with the integrated tow-pod attached to the rear. Today, they needed the tow-pod to pick up all of the nascis they killed.

The engines of the Mamba were a higher-pitched whine than Colt's hover-hog, but Brem had always been more stealthy, needing less vehicular muscle than Colt. She was an assassin, and a very good one, a perfect team member for an outlander and bounty hunter. Colt, with his background as a massively successful cage fighter, mine worker, and security goon for the Velvet Curtain brothel, liked to get in the thick of things, personally.

As they both swung off their bikes and crunched toward the dead, ugly critters, Colt rolled his shoulders, laced his fingers together, and cracked his knuckles. "I think that's seventeen for the day already, and it's not even midmorning."

"Eighteen," Brem corrected as she opened the hatch of the tow-pod to reveal the dead rodent-scorps packed inside.

Colt grimaced at all the dead creatures. "When I became an Outlander, this wasn't exactly the sort of bounty I had in mind, but it'll bring us some good coin. A bounty is a bounty." He cocked a grin toward Brem. "Besides, it's a lot of fun."

"Yes," Brem said, with a completely business-like expression. "A lot of fun."

The owners of the power plant Dar-Zeta paid fifteen argentums per dead nasci just to clean up the canyons and stop the things from chewing on the power cables.

With his gloved hand, Colt picked up the corpse of the second male nasci, the one he had killed, and lifted up the dead thing, careful to avoid its poisonous spines. Its multiple legs dangled, and thick brownish-red blood dripped from cracks in its cauterized wound. He tossed the nasci into the tow-pod.

"Not much room left in there," he said. "Of course I could use my boot to stomp them down and pack the bodies." He looked at the splotch and smear of the exploded nasci on the canyon wall. "Better knock the score back down to seventeen. This one's not intact enough to qualify for a bounty."

Brem tossed her long dark hair behind her. "All the parts make a whole," she said, quoting some philosophy that Colt didn't care about. "It is all one being."

"It's a bunch of unrecognizable pieces, but go ahead and scrape them together. Maybe Dar-Zeta will give us a partial payment." Colt kicked some of the rock debris away to expose the more neatly killed female. He picked the thing up by the back of its neck and held up the rounded swollen body. "Ecch! I thought I've seen ugly before, but this wins the prize."

The belly of the female was covered with swollen blisters, nodules as long as Colt's thumb, dozens and dozens of them, and they all looked ready to pop. Each one squirmed slightly from something inside. "This one's got some kind of disease." He hoped it wouldn't decrease the value of the carcass.

"Not a disease. Those are its young, all ready to hatch. I think they burst the pustules and tear their way out of the mother's belly, then eat the carcass for their first meal."

"Then it looks like you did mama a favor." Colt made a disgusted sound as he tossed the female's corpse, squirming pustules and all, inside the tow-pod and closed the hatch. "Looks like we've got a full load. Let's head back to the Crow's Nest. If Jenna's back from her run to Casbah City, maybe she'll want to join us for an afternoon run. We always have a lot more fun together when it's the three of us."