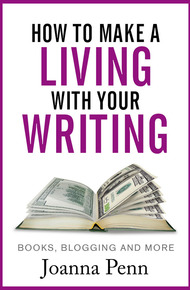 Joanna Penn writes non-fiction for authors and is an award-nominated, New York Times and USA Today bestselling thriller author as J.F.Penn. She's also an award-winning creative entrepreneur and podcaster. Her site, TheCreativePenn.com has been voted in the Top 100 sites for writers by Writer's Digest.

How to Make a Living With Your Writing by Joanna Penn

Would you like to make a living with your writing?

This book will show you how.

I spent 13 years working as a cubicle slave in the corporate world. I was miserable in my job and my creativity was stunted by the crushing daily grind. Then I started writing books and blogging, using my words to create books and products, attracting readers from all over the world.

In September 2011, I left my corporate job to become a full-time author and creative entrepreneur and since then I've grown my business year on year to multi-six-figures, all based on my writing. More importantly, I'm finally living the happy life I always wanted. And you can do it too.

How to Make a Living with your Writing covers productivity and mindset tips; your publishing options and how to self-publish successfully in ebook, print and audiobook; how to make money blogging, as well as with speaking, advertising, content marketing and more. Plus, how to transition out of your day job if that's your goal.

There are some important first principles to consider before we get into the nitty-gritty of the book. These will frame what we cover in the following chapters.

(1) Think of yourself as an entrepreneur

I know that many writers struggle with 'entrepreneur' because it sounds like a Silicon Valley word that is somehow removed from creating art. But consider it another way.

If you agree with that, then writers are the ultimate entrepreneurs, because we take our ideas and create books, ebooks, print books, audio books, scripts, and lots of other ways of taking words and turning them into value. That value may be giving readers entertainment, information or inspiration, and it creates value for you as the creator in terms of an income.

Once you reframe your own identity as an entrepreneur, you will find it much easier to get your head around some of the ideas in this book. Of course, you'll need to learn new skills, but that's true of anything in life, and entrepreneurs thrive on new challenges!

In most standard day jobs, you work for a certain number of hours and you get paid for those hours. If you don't work, you don't get paid or you get sacked at some point for not adhering to your contract. Your work is not scalable, as you're paid once for the hours that you work. And you don't get that time ever again.

With scalable income, you create once and sell over and over again.

Let's say you spend a year of your evenings and weekends on writing a book. That time is spent once, but that book can sell one copy, or it can sell 100 copies, 1000 copies, even a million copies. It can also earn money for the life of the author plus 70 years after the author dies, which is the current copyright period. So, your time is spent once but the income from that time can continue for many years.

We're talking about creating intellectual property assets that will put income in your pocket for years to come. It might be a small trickle every month at first, but that will increase in time as you add more to your portfolio.

Start thinking about shifting your income streams from being paid by the hour to being paid for scalable assets.

Most of us need to have a balance at the beginning, as we need immediate cash flow to pay the bills, but think about your time as precious when you sit down to work. Is what you're doing scalable?

I changed the balance over a number of years. In 2007, when I started writing books, my scalable income was 0% because I had a day job and only got paid for the hours I worked. I spent nearly four years writing in the evenings and weekends while I worked at my day job, steadily growing my number of books and products, altering my percentage split over time.

In 2017, my scalable income is now around 80%. I still do some non-scalable work e.g. professional speaking and consulting, which provides short term cashflow (we all need that!), but I try to focus most of my time into creating scalable assets.

Let's take a little trip back in time to February 2008 when I was working in a large IT department at a mining company in Australia.

The global financial crisis hit and in one single day 400 of us were laid off. Our manager came in to say goodbye with a stack of papers, handed them out and we all scrambled to find new work. At that point in my life, my job was my only source of income, and in one fell swoop, it was all taken away. I decided then and there to never rely on one company for all of my income again.

Nothing is stable, corporations least of all.

Many people had a similar realization back in 2008. It was a wake-up call for developing multiple sources of income and not relying on a job or a company to look after you.

But it's the same principle for making a living with your writing. It's important to make sure that you have more than one source of incoming cash. If you're reliant on one publisher, one self-publishing distributor, one client, one product or one book, at some point, you're likely to find yourself in trouble.

Many writers are focused on selling locally, either at a bookstore in their town, or writing for media that people they know have heard of. But we live in a fast-changing world, and global internet penetration is expanding every month. Technology now enables us to sell and market to people all over the world.

If you want to make a living from your writing, then expand your horizons, because your future income is likely to come from the rest of the world, not your local bookstore. A book that will change your perception on this is Abundance: The Future is Better than you Think by Peter Diamandis and Steven Kotler. Or check out www.SingularityHub.com.

(5) Decide on your definition of success

This book is about how to make a living with your writing. But the definition of living will be very different depending on your situation in life and what you need to meet your monthly outgoings. Consider the following.

•How much is your household income right now?

•How much are your household expenses and monthly outgoings?

•What are you willing to change or sacrifice to alter your situation?

•How much do you really need as a living? For example, many writers move to a cheaper city in order to downsize.

•How long are you willing to wait to make the change?

Write down your definition of a living and how much you want to earn from your writing in the next year and then the next five years.

Go on – push yourself!

Since we'll be talking about books in particular, you will also need to decide what you want for your writing career, as this will determine what you write, how you publish and what you do for marketing.

There are two extreme ends of the author success scale.

At one end is E.L. James with Fifty Shades of Grey, who made $95 million in a single year with book sales and movie deals. Her books have sold over 100 million copies. Not many people would say that Fifty Shades is great literature – but readers love the books and it sure is making a living!

At the other end is wanting to win the Booker Prize or the Pulitzer or other literary prizes where the aim is critical acclaim as opposed money. Of course, you do get some money. The Man Booker Prize winner gets £50,000. That might sound a lot to some people, but it's nothing compared to E.L. James, and it's not much of an annual income if it's taken you five years to write the book.

So you have to consider these two extremes for yourself: literary success vs. commercial success, critical acclaim vs. readers buying your books in mass volume and the associated income.

Most authors will say that they want to be somewhere in the middle. They want to write a really good book that critics will like and will also be a commercial success. But that's very hard to do and that's where many writers earning below average incomes sit. Genre fiction sells much better than literary fiction in general, but genre fiction is unlikely to win you a prize, certainly in the main literary fields.

It's really about considering what's important to you and about how you're going to measure that success.