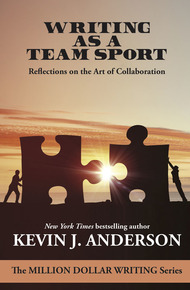 Writing as a Team Sport by Kevin J. Anderson

In a creative project, are two heads better than one? Writing with a partner can produce a remarkable synergy, building on each others' talents that results in a work unlike anything either could do alone.

Or it could be a disaster that might ruin a friendship.

Kevin J. Anderson has worked on numerous novels and stories with more than a dozen collaborators, and many of those projects have become bestsellers and award-winners. In this in-depth book—exclusive to Storybundle!—Anderson describes various methods with frank recollections of his own experiences. You'll learn several collaborative techniques that will suit any sort of writer, as well as the pitfalls you may encounter.

Includes a sample collaboration agreement to adapt to your own needs.

Two Heads Are Better Than One

Writing is a solitary profession—at least that's the stereotype. We can all picture the wild-eyed writer holed up in a cabin with no outside contact, staring intently at the empty page, crumpled papers and torn-up notes scattered all around.

Some writers can only work alone, except for the company of their muse. They refuse to discuss their work in progress because they're afraid it might snuff the creative spark. They won't talk about their core ideas because they're afraid someone will steal them. They can't share a draft with test readers because the mere fact of revealing the prose will deflate the entire project.

Some writers are more social than that, believing that ideas are never a limited quantity, that sharing can enhance rather than diminish the creative energy. Some writers nurture their own ideas under the sunlight of input from their colleagues. For such people, writing can be a team sport. If you're open to it, your novel or story can benefit from having two heads instead of one.

Over the past thirty years, I have published more than 140 books. Many of them were my solo efforts, my original ideas, stories I wanted to tell by myself. But in numerous cases I worked with a coauthor, someone to help do the heavy lifting, a partner with a certain area of expertise vital to the novel we were planning. On some occasions, s colleague approached me with an idea or unfinished manuscript, and decided to work with them; other times it was the opposite, and I was the one doing the recruiting a. Sometimes, we were close friends and thought it might be fun to do a project together; sometimes, I had to seek out a specific partner because I needed their expertise.

I've written 69 books and numerous short stories in collaboration with more than a dozen different coauthors, including my wife Rebecca Moesta (and we've been married for 26 years). I've tried many different methods and run into many pitfalls. I hope some of these thoughts and experiences will help you become a successful collaborator yourself … or at least help you avoid some of the dangers.