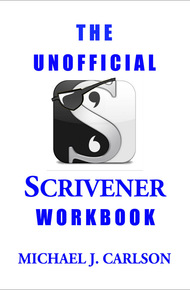 Michael J. Carlson is an American science fiction author of numerous novels, short stories, and non-fiction articles and books. He also maintains an active speaking schedule, giving workshops on writing software, story structure, and accurately writing injuries from the character's point of view. MJ lives in Melbourne, Florida with his Wise Reader and Muse, Sparkle, and has more computers than any sane person should possess. For more information, check out mjcarlson.com.

Scrivener is novel writing and organizing software designed specifically for the non-linear way writers really work. The Unofficial Scrivener Workbook is designed to work in conjunction with The Scrivener Manual and The Interactive Tutorial that came with your version of Scrivener. Written by veteran Scrivener user and author M.J. Carlson, you'll learn how to set up a new project, import and organize your research, track scene elements, create custom layouts, and more with this user-friendly Scrivener workbook. The workbook is organized into twenty-six step-by-step exercises and illustrated with over fifty illustrations to aid the learning process.

To quote from the Scrivener Manual:

"Most word processors and text editors aimed at writers assume the creative process will take place in linear form; that is, they assume that the writer knows how his or her work will begin and will start at the beginning and continue through until reaching the end, and for those who do work that way, they assume that a linear form is a useful format for a text spanning hundreds of pages. Planning and restructuring are therefore forced into a separate workflow—the writer must either plan before beginning and keep track of hundreds of different files using the computer or face the laborious task of cutting and pasting numerous chunks of text to restructure a long piece of work at the end. For shorter pieces of writing, this is not a massive problem, but for longer texts—such as novels or academic theses—the writer can often find him- or herself battling against the tools of their trade. What a word processor does get right is in not presuming anything about your working methods. It is, at the core, ruthlessly simple.

Scrivener is part of a new breed of writing software which focusses more on providing a solid open-ended writing tool (as the word processor does) rather than a writing process, which presumes a system upon you. As with a word processor, there are no chapters or sections or scenes; how you use the software determines these things, not some feature baked into the program. Scrivener's design is fairly unique in that it easily provides a platform for writers of many philosophies and disciplines. It's a tool that works equally well for a doctoral dissertation, as it does for writing a short story or a screenplay."

Most people, who set out to write a novel do so in either Microsoft Word or one of the free, open source variants, like Open Office, or Libre Office. Most people also find out pretty quickly that using a word processor is, shall we say, a less than ideal tool for writing a novel-length work. To paraphrase Mick "Crocodile" Dundee, "You can do it, but it always gives me gas."

I mean, just take saving your work. There are only two ways you can save a novel-length work with a word processor; either as one really long file or as a bunch of text files in a folder. I mean, really. If you need to move a scene in the former, you run the risk of losing the scene completely if you accidentally forget and copy something else before you paste it where you wanted it, or you forget to cut it from the first place and end up with two scenes exactly the same, or something equally ridiculous.

Not to mention, what do you do with your research, your descriptions of characters' physical attributes, etc? Or maybe you're one of those who likes to look around on the Web for a picture that looks like how you envision your character. Where do you put that, in the same folder as the other stuff? How about web pages or search results? What about that PDF or all the information about the French national train system? Where's that going? So, stuff gets misplaced, browser bookmarks fill up, and we cross our fingers every time we decide to change out main character's eye color that we'll get every instance and they won't go from blue eyes to green and back again.

Until recently, there wasn't much choice. The word processor (any word processor) was an imperfect tool, but any of them were light years ahead of you father's Smith-Corona electric (oh, wait. I had a Smith-Corona electric typewriter). Actually, the big improvement in going from the electric typewriter to the word processor was the ability to correct typos and misspelled words without resorting to white paint and an itty bitty brush. And we could actually move a block of text to a different place not involving either scissors or a boat-load of re-typing.

Seemed like a miracle at the time. Damn. But some of us knew there had to be a better way, and darned if a couple of really clever guys from the UK didn't come up with it (clever monkeys, those Brits). So, Scrivener was born.

Scrivener was originally designed for the Mac, which torqued off a bunch of people who had invested in Microsoft products. So, to stop the constant complaining and snoot about how if Scrivener was any good, it would've been designed to work in Windows, for god's sake, and not that Apple junk, we now have a version for each. And, I'm pretty sure, those same clever Brits realized the Windows people would be willing to trade body parts for a writing program which actually worked.

I'm told they're similar enough that you can go from one to the other and recognize things, but for my part, the Redmond Behemoth and I parted ways over a decade ago, and I never looked back. Be that as it may, the philosophy behind Scrivener is to give the writing public a tool for organizing something as big as a novel, including the text, research, photos, web pages, sound bites, and even movies.

The program is so versatile, it can be customized to work almost any way the individual can think of. And, at the time of this writing, still comes in at $45 for the Mac version and $40 for the windows counterpart (there's even a free, beta version for the Linux wing nuts out there, we know who we are).

Sure, there are other novel organizing software programs out there, and most of them work pretty well, but none of them I've tried (and I've tried a lot of writing software) comes close to Scrivener in terms of robustness and versatility.

If you're reading this, you either bought Scrivener (three cheers and a tiger for you) or you're considering it (go on, dude download it. There's a 30-day trial). What have you got to lose, but an inefficient way of doing things? Yeah, it's scary at first, especially the first time you open it up, but so was sex, and it turned out okay, for the most part.

Besides, what if it does everything everybody say it does? Wouldn't that be cool?

This workbook is set up similarly to a college laboratory workbook. The text, and most of the illustrations are based on The Scrivener Manual and The Interactive Tutorial included with your version of Scrivener. However, this document is structured as a series of exercises that will, Hopefully, lead you to a solid, basic understanding of how to actually use Scrivener on a daily basis, and why it can be used for all your writing needs. In the process, you'll learn how to set up your own novel template to use as you wish and change at any time to suit your needs.

This workbook is an UNOFFICIAL version. That means, the opinions, bad jokes, dumb errors (both the typos and errors in judgment), and rants against Microsoft Word are all on me. The good people who brought you Scrivener had nothing to do with the creation of this workbook or my odd sense of humor. Having said that, This workbook refers extensively, if indirectly, to the Scrivener Manual and the Interactive Tutorial. Most of what I cover here is contained there without the pretty pictures. Also, this workbook only scratches the surface of what Scrivener is capable of. I've been using it almost every day for six years in two versions, and I still regularly learn new things it'll do.

Please refer to the Scrivener manual or the interactive tutorial for issues not addressed in this workbook. Also, the Scrivener website: litteratureandlatte.com, has links to various YouTube videos which cover the concepts here (the section on setting up Compile is almost a transcript of the YouTube video). The forums are also a good place to go looking for the answers to life's questions, and if all else fails, the good folks who brought you scrivener have a contact link.

I've found the Scrivener community to be friendly and helpful toward newbies with questions. Everything I've presented in this workbook is something I had to learn, often more than once. Don't be ashamed to ask questions. In this case, the converse of the old adage is true: "It's better to ask a question and be thought a fool, than to remain quiet and remove all doubt."