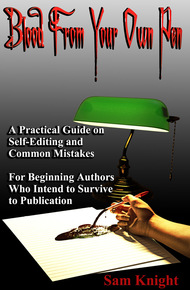 A stay-at-home father, Sam attempts to be a full-time writer, but there are only so many hours left in a day after kids. Once upon a time, he was known to quote books the way some people quote movies, but now he claims having a family has made him forgetful, as a survival adaptation. He can be found at SamKnight.com and contacted at [email protected]

Blood From Your Own Pen by Sam Knight

Blood from Your Own Pen: A Practical Guide on Self-Editing and Common Mistakes: For Beginning Authors Who Intend to Survive to Publication

Sometimes there are little things you didn't know about that can change everything, and that's why I decided to write this guide. It is a compilation of things that have taken me sixteen years to learn, and I am going to give you the chance to learn it all in sixty minutes! Yay! Talk about a return in time investment!

The insights collected throughout this book are all things I wish I could have had in a book, in my hand, the day I decided I was finally going to put my butt in the chair and write a novel. Having this would have moved my learning curve up by years. Literally. So many of these were mistakes I made over and over again until some kind soul finally pointed it out, or until I had seen it (and hated it) in enough other authors' stories to finally recognize it in my own.

Before you pay an editor to bleed red all over your manuscript with their pen, grab hold of as many of these rules as you can and squeeze them until the metaphorical blood drips from your imaginary fist. Use it to fill your own red pen and then go bleed red on your story first. You will get more benefit, and learn more, from an editor who doesn't have to correct these kinds of mistakes for you.

And it will cost you less in the long run. You will never find anyone else in the writing world whose blood is less precious or expensive than your own.

New writers tend to have one of two problems with descriptions: too much, or not enough.

The seemingly unlimited choices of how to describe things, and the problems they can cause, manifest in so many ways that I considered making this a section all its own. Instead, I decided to include them all under the same heading of Common Problems With Writing. Many writers don't recognize a problem as being part of the use of description, and I worried that someone thumbing through would miss what they were looking for because it was under the Descriptions heading. As you read other examples of Common Problems with Writing, please keep in mind how many of them are actually a problem with description, and realize that, really, all a story is, is a bunch of descriptions.

Writing teachers like to tell us "show don't tell," and there is some truth to what they are saying, but really, everything in a story boils down to tell. The trick is to make a reader think about what you are telling them, so that they infer things that you have not directly told. That is what show means.

Remember, a reader's imagination is better than anything you can write. What you want to do is give fertile soil with a great topiary frame for their imagination to grow in. After you give them the shape, let them fill in all the little details.

An occasional problem with descriptions is sounding literal when we mean them to be figurative. (See literally for more on this.) As writers, we love to be artistic and use our metaphors and similes, but sometimes, especially when writing science fiction or fantasy, it can be difficult to tell if something is actually that way in the story or if the writer is being poetic.

Remember to try to interpret what you write as someone else may. They might not see it the way you did. This is a good reason to have editors and beta readers. (A beta reader is someone, usually not a professional, who reads your early manuscript and helps you find problems and mistakes. You know. Like your mom. Or my wife.)