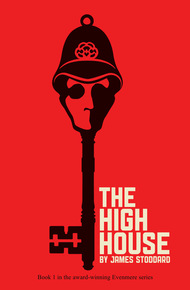 James Stoddard's short stories have appeared in SF publications such as Amazing Stories and The Magazine of Fantasy and Science Fiction. His science fiction story, The Battle of York, was included in The Year's Best SF 10, published by Eos Books, and his fantasy story, The First Editions, was included in the 2009 edition of The Year's Best Fantasy 9 from Tor. His novel, The High House, won the Compton Crook Award for best fantasy by a new novelist, and was nominated for several other awards. Two sequels, The False House and Evenmere followed. He has also published a rewrite of William Hope Hodgson's The Night Land, including an audio version.

The High House by James Stoddard

Evenmere, the High House, a Victorian mansion of infinite size, is the mechanism that runs the universe—the lamps must be lit or the stars fail; the clocks must be wound lest Time cease; the Balance between Order and Chaos must be preserved or Existence crumbles.

When Carter Anderson finds himself Steward of Evenmere, he must learn—before it is too late—the strange rules of the house; he must travel its winding corridors and secret passages to the myriad countries lying within its walls. He has little time to act; the anarchists have stolen the Master Keys and are seizing control of the house; the Gnawlings are massing, the Black River is rising; the Eternity Clock is running down. What he does will determine the fate of Reality. But his enemies are strong, and the Room of Horrors is never far from him.

Winner of the Compton Crook/Stephen Tall award, named a Top Ten Locus book of the year, nominated as Best Fantasy of the Year by the International Association for the Fantastic in the Arts, and a finalist for the Mythopoeic (Aslan) Award.

On the southwest side of the High House, at the garden entrance, a little door led outside from the kitchen into a yard overshadowed by immense oak trees, bordered by a brick fence four feet tall, with short bronze statues of angels with longbows drawn, standing atop the wall at each of the four corners. A wishing well, surrounded by red lacecaps, stood in the middle of the yard, with snails drifting like sailboats up and down its sides, and a bronze plate along its rim that read: Masonry From the Ifdawn Marest. A row of tall hedges filled the northern portion of the court, forming a haphazard maze where Carter often played. He loved the yard; it was cool on hot summer days, and when the wind blew, the leaves of the trees rustled like the wings of giant birds. He liked to sit with his back to the well and read books, adventure stories such as The People of the Mist or, even better, The Well at the World's End, which he thought must be much like this well. Beyond the short wall ran a cobblestone path that circled the entire house, and in its midst stood a black lamppost. Every evening, Chant strolled out the white wooden gate hidden behind the grape arbor, singing snatches of verse as he lit the lamp. Ivy covered the fence; verdigris covered the angels; a heavy layer of peace covered the whole yard.

One day, as twilight slipped gray over the world, when the Lamp-lighter had already done his work, Carter lingered upon the lawn, watching a blue beetle, big as his thumb, making its way along the bottom of the fence. Its shell crackled like papyrus as he cautiously prodded it with a stick.

In the midst of his investigation, a shadow fell between him and the lingering sun. Glancing up, he gave a cry of fear, dropped the stick and backed away, for a man stood, watery as a mirage, on the other side of the fence. In the dimness and the long shadows, when he had first looked, he thought the stranger had no face at all, but a smooth, pink blankness. He saw now this was not so, but it took a moment for his heart to calm. Although he had never actually seen an English bobby, he recognized from illustrations in books the man's tall helmet, dark uniform, and long, wooden billy, swinging on its cord. When he smiled, he had a round, pleasant face.

"Did I startle you, lad?" he asked, in a low, rasping voice, belieing his affable stare. "Terribly sorry. I'm Constable Pratt."

"Pleased to meet you, sir," Carter said, remembering himself. "Has there been trouble?"

"None at all. None at all. I'm simply making my rounds. It's good to check on things." The Bobby drew close to the wall, though he did not touch it.

Carter thought it peculiar that a constable should make rounds so many miles from any village, but he said nothing. His first fear had been replaced by a solid dread, a kind of quiet horror. He did not understand it, but it was made worse each time he glanced away from Pratt, for the illusion of his facelessness returned when Carter saw him only from the corner of his eyes.

"I wonder," the Bobby said, "could you perhaps let me in through the little gate? I'd like a bit of water from that well, if you don't mind."

"I couldn't do that, sir. Chant keeps it locked. I could get Brittle to let you in if you'd like."

The Bobby exhaled with a noise like a low hiss, but he smiled again. "No, don't trouble him. Perhaps you could bring me a cup of water, then?"

"Of course," Carter said. If anything, his fear had increased. He fought the urge to back his way to the well, as if he were retreating from a viper, yet every step with the Bobby out of sight filled him with panic. He wanted to dart inside, shouting for Brittle and Enoch, but instead he lowered the bucket and drew water from the well. He dipped the tin cup in, filled it, and brought it toward the constable, who waited, hands outstretched.

And suddenly he knew, as surely as he knew the faces of the angels on the fence, that the Bobby could not pass beyond the wall, that it served as a barrier he could not cross. This, then, was the line, and if Carter handed him the cup, he would be crossing it, over into a country where he could be reached. He paused.

Carter stretched his hand out and gently set the cup upon the wall. "Here, sir."

Just at the corner of the constable's eyes, so slight Carter thought he might have imagined it, he saw the dagger malice of one thwarted. "Thank you, lad," he said, but he did not take the cup.

"Wait! Before you go, come closer and let me ask you something."

With all the courage he possessed, Carter stepped toward the fence, not even certain why he obeyed, but quite careful not to cross it with any part of his body. The Bobby, too, drew as near as he dared, and spoke in a whisper.

"What if you took the keys on the brass ring? You could see what was behind the Green Door. Wouldn't that be wonderful?"

Even as he said it, the Bobby leaned closer toward the wall. His hand shot out, clawlike, toward the boy, but struck an invisible barrier above the fence. In that instant, his features went blank again, and he stood like a faceless doll, struggling against the obstruction. Carter backed away and the Bobby did likewise, his features returning.

Carter bolted for the house, his courage expended. He dared not look back until he had locked the heavy door behind him. Then he peered through the leaded glass. The Bobby stood away from the wall, beside the lamppost, his head turned downward, hidden.