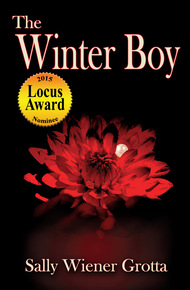 Sally Wiener Grotta is a full-time freelance writer. Among her numerous books are the novels The Winter Boy (a 2015 Locus Award nominee) and Jo Joe (selected as a Jewish Book Council Network book). Her hundreds of stories, columns, essays and reviews have appeared in scores of magazines, newspapers and journals, such as American Heritage, Popular Science, North Atlantic Review, The Robb Report, PC Magazine, The Philadelphia Inquirer, Woman's Day, Parade and many others.

Sally has traveled on assignment throughout the world to all the continents (including three trips to Antarctic), plus many exotic islands (such as Papua New Guinea and Madagascar), covering a wide diversity of cultures and traditions. Her far-ranging experiences flavor her stories and presentations with a sense of wonder and otherliness, plus a healthy dose of common sense. A popular speaker who has appeared in venues large and small throughout North America, as well as on radio and TV, Sally also has a reputation for stimulating open, honest discussions about creativity, storytelling, the business of writing, and the nature of bias and prejudice. Member of SFWA and The Authors Guild. (www.Grotta.net)

The Valley of the Alleshi is the center of all civilization, the core and foundation of centuries of peace. A cloistered society of widows, the Alleshi, has forged a peace by mentoring young men who will one day become the leaders of the land. Each boy is paired with a single Allesha for a season of intimacy and learning, using time-honored methods that include storytelling, reason and sex. However, unknown to all but a hidden few, the peace is fracturing from pressures within and beyond, hacking at the very essence of their civilization.

Amidst this gathering political maelstrom, Rishana, a young new idealistic Allesha, takes her First Boy, Ryl, for a winter season of training. But Ryl is a "problem boy" who fights Rishana every step of the way. At the same time, Rishana uncovers a web of conspiracies that could not only destroy Ryl, but threatens to tear their entire society apart. And a winter that should have been a gentle, quiet season becomes one of conflict, anger and danger.

A Study Guide for The Winter Boy is available free for book discussion groups and classes from PixelHallPress.com

The Valley of the Alleshi stretches wide and green, surrounded by gentle mountains that cut the coldest of winds from the north and the wildest of hurricanes from the south. In the spring, summer and fall, the eight passes flow constantly with pilgrims, traders, petitioners and emissaries — and, of course, Allemen, the leaders of the land, trained by the Alleshi. But in winter, heavy snow fills the high mountain passes. Only during those deep white months is The Valley isolated and inaccessible. It is a precious quiet season for the Alleshi.

As one such season approached, Rishana had just returned home from a strengthening class at the Communal Hall when she saw Dara through her mudroom window.

Dara was tall and lean, with flesh deeply etched by life. Her black hair was streaked with wide swathes of white. With precise, practiced grace, she walked up to the back door, raised her hand to knock, then noticed Rishana standing inside. So she opened the door and walked in.

"Dara, you're early!" Why was her mentor here, now, before she could bathe and prepare herself for their daily meeting?

"I'm not staying long." Dara followed Rishana into the spacious sun-filled kitchen and sat at the square oak table.

Obviously, Dara had something on her mind that she felt couldn't wait.

"Yes?" Rishana asked, as she sat down across from Dara. Her exercise suit was sweat stained and itched. She raked the wet strands of her auburn hair that were escaping the tie-back ribbon, pushing them behind her ears. Then, realizing what she was doing, she draped her hands onto her lap, forcing her body to be still and receptive.

"It's time for you to choose your First Boy," Dara said with deliberate calm, her dark, age-yellowed eyes locked on Rishana's. "I saw a worthy candidate this morning, the son of one of my Allemen. The boy could prove… interesting for you."

"My First Season isn't supposed to be until the spring," Rishana protested. "I'm not ready."

"Of course you are, or I wouldn't suggest it."

"What if I'm not, Dara? A boy's entire future depends on what I do, how well I'm prepared."

"You know you won't be alone. I'll guide you through your First Season."

"I don't understand." Rishana paused, trying to sort her thoughts. "Everyone has drilled into me how tightly structured my training schedule must be to fit everything I need to know into three years. Why would you now want to cut it short by four months… and so suddenly?" She studied her mentor, trying to read Dara's face and body the way she'd been taught. "Is there something special about this boy?"

"No, not at all, Rishana," Dara reassured her. "We're simply very pleased with how quickly you've learned. Waiting until the spring won't prepare you any better, but it would delay teaching you the finer points of being an Allesha, which you'll learn only from actually working with a boy in Season. Trust me; the timing is right."

The younger woman nodded, not so much in agreement as acceptance. Of course, she trusted Dara. Faith in the wisdom and power of the Alleshi was the foundation of her life.

"I don't have your experience or knowledge, Dara; I wouldn't know how to select a boy. Can't I simply accept this candidate, if you think he's the right one for me?"

Dara arched her back against the offensive suggestion. "Absolutely not! This is a decision only you can make. However, I can help you analyze what type of boy to choose for your First, which will define the kind of Allesha you wish to become."

"Let me explain by telling you about this candidate." Dara focused on something only she could see in the empty air between them. "Unlike most Allemen sons, he's a rough one — arrogant, and a bit of a troublemaker. Still, he is bright and alert." Dara's voice was as disciplined as ever, enunciating each word clearly, forcefully. However, she paused between phrases more than usual, carefully considering each word before she said it. "He'll constantly try to provoke and test you, attempting to control rather than learn from you. But if you can reach him, as I believe you can, his strength of will, intelligence and good heart could be of great value for our people."

"Sounds like a strong candidate." Rishana wondered why her mentor seemed to be holding herself in tight check. Perhaps Dara was being careful not to unduly influence her in this important decision.

"Yes, but only a few Alleshi are willing or capable of taking on such a difficult boy. I was appointed your mentor because we believe you have within you that ability, and because problem boys have been my specialty. But you're under no obligation to follow in my ways. Should you select another kind of boy for your First, I will still work through the Season with you. It is your choice."

"By meeting him, then evaluating your reaction. Does his coarse manner irritate you, or can you find humor and challenge in it? What do you see beyond the face he presents? Is it something intriguing that you'd enjoy unearthing, though the process would be difficult?

"Look into your heart," Dara continued. "Do you want to give a piece of it to this troublesome boy? Remember, once you are an Allesha to a boy, he becomes part of you, and that will change you. You must be honest about yourself — who you are, and what you want, both for the moment and for the course of your life. To choose a boy such as this one means that your first Alleshine Season — and Seasons to come — will be filled with conflict and stress. You will have to learn to be fierce, while instilling gentleness. It will wear you out before your time. There's no harder work, but also none more important."

"What if I choose another kind of boy for my First?" Rishana asked.

"Most boys aren't like this one. They're confused, mischievous, but willing to bend and eager to learn. Seasons with them start joyously and proceed toward harmony."

"Not much of a choice, is it?" Even as she said it, Rishana wondered why the words somehow didn't ring true. "Who wouldn't choose a life of joy and harmony over one of conflict and stress?"

"I for one, and possibly you." Dara sighed, a wistful smile softening her face. "Once you've moved past the conflict, once you've harnessed a problem boy's energy with discipline, the Alleman you create can become one of our most powerful and effective. Easy-to-train boys are fine for those times when you want to relax, but I couldn't have given all my Seasons and all my years to languid pleasure. I devoted my life to fire and stone, and with each of my problem boys, I became stronger, more alive." Dara's smile broadened, deepening the wrinkles around her mouth, and yet, for that brief moment, making her seem young once more. "And I couldn't be prouder of the Allemen they have become."

"I'll leave now, so you can meditate on your decision. After your bath, prepare a simple lunch, one that won't distract you from your thoughts. Then, sit under one of your apple trees, among the fallen leaves. I'll be back in the late afternoon. Soon after, the Southwest Battai will come with the boy. Meeting him places no obligation on you, but will help you think things through."

Rishana was already deep in thought, weighing all that Dara had said, and trying to decipher what hadn't been said, when Dara left as quietly as she could. On her way out, the older woman made sure that the outer front door of the house was closed, as a sign that Rishana wasn't accepting visitors.

"Evanya!" Karinne greeted her friend warmly at her kitchen door. The two women always used the names of their youth when they were alone together, names from so long ago that no one else in The Valley remembered them.

One look at Evanya's shadowed face, and Karinne knew something momentous had happened. Silently, they secured the house and sequestered themselves inside the locked inner room, safe from any eavesdroppers. They spoke in hushed staccato tones, compressing every sound deep in their throats, though they knew no one could hear them here.

"The boy has arrived," Evanya said.

Karinne's breath caught in her lungs. "So soon? We weren't expecting him until the spring."

"Mistral and Shria had no choice if we didn't want to chance losing him." Evanya shivered, though the room was warm. "He's determined to marry his girl; he had actually gone to their village council to announce their betrothal. If Mistral hadn't managed to get the girl's mother to block him…"

"But no woman speaks at the Birani council."

"She's a widow with no man to speak for her. So the council had to listen and honor her decision."

"An Alleman for my daughter or no man."

"I'm impressed. We should keep an eye on the mother, and see if she has the makings of an Allesha." Karinne struggled to rearrange her small, round body, trying to find a comfortable position. The inner room wasn't meant for women whose bones were no longer flexible, regardless of how well-padded they had become. "Perhaps it could be a good thing that he's arrived, that the waiting is over."

"Still, I'm concerned about the timing. I thought we'd have longer to train her. Four months could have made such a difference." Evanya paused. "There's so much she doesn't know, doesn't yet understand. And she's so young." She sighed deeply.