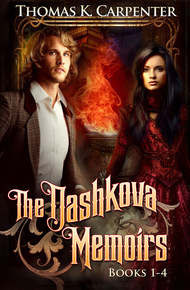 Thomas K. Carpenter resides in Colorado as a full time writer with his wife Rachel. When he's not busy writing his next book, he's out hiking or skiing or getting beat by his wife at cards. He's published over 50 books and had his short stories featured in dozens of magazines. His largest series is called The Hundred Halls, which is a multi-series universe with over twenty books and over 6,000 pages of magical academy adventure. If you enjoy reading a well-written contemporary fantasy saga or are a Harry Potter, or Magicians fan, these books are written for you! Pick them up and—escape to the Hundred Halls!

After years of running from the Emperor of Russia's assassins, Ekaterina "Kat" Dashkova has finally found an unlikely home in Philadelphia under the tutelage of Benjamin Franklin. Kat must navigate the treacherous waters of American politics while solving supernatural mysteries amid the din of ominous rumblings threatening to drag the country into a new war.

Some revolutions begin with the gunpowder sonnets of cannon fire, others with the fiery words of tyrannical men. This one began with a middle-aged gentleman wandering the cobblestone streets of Philadelphia in his knickers—and nothing else.

Ben Franklin and I had been called to investigate, not because half-naked mid-level functionaries of the Custom Hall were particularly interesting to the pair of us, or because he'd broken into a Quaker family's home on an idyllic spring afternoon and was caught trying to put on the oldest daughter's beige dress and petticoat. What drew us was the way the man's memory had been cleaved like an apple struck with a saber, suggesting an air of sorcery.

"You say he has no knowledge of what happened to him?" asked Ben with that familiar twinkle in his eye.

The horrified wife, one Harriet Cooper, tugged on the neckline of her muslin gown and glanced at her husband, who was slurping porridge in the other room at the dining table. Her brow knotted and raised, then bunched in the middle with a concern that bordered on exasperation.