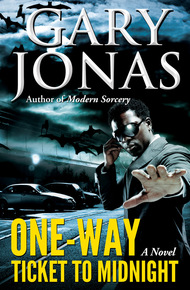 When street people start dying in Tulsa, Oklahoma, the police search for a regular killer, but Howlin' Roy Porter, a down-and-out bluesman, has seen the pattern of death before. He knows the murders involve supernatural rituals, and the cops don't stand a chance. Because Roy might be the next victim, he turns to the man who stopped the killings ten years earlier, a biker named Jim Hartford. But Jim is a shell of the man he once was, while the killer is far more powerful.

One-Way Ticket to Midnight is a love song to the blues and the power of music. It's also loaded with supernatural action, so strap yourself in and hang on for a wild ride.

I'm a sucker for stories about music and magic. Gary Jonas managed to combine both of those in One Way Ticket To Midnight. The blues and murder are a natural combination, but that touch of terror—that's really, really nice. Gary's always doing innovative work both in his fiction and his publishing, so it's a real treat to include him here. – Kristine Kathryn Rusch

The day felt like bad news. The night's rain had left the city looking sick and gray like a drowned rat. Water collected in gutters, swirling around the garbage piled at the sewage drains. Puddles stood in the streets, but the sidewalks were mostly dry. People driving to work didn't look too happy to be up so early. Even the birds refused to sing.

Roy Porter leaned against the brick wall of the Tulsa Rescue Mission, turning his harmonica over in his ebony hands. He liked the feel of the instrument—liked the fact that he could play a bit of music that wouldn't sound great to anyone listening but would create true songs in his mind. Sometimes the music brought back memories he'd rather forget, but on days such as today, it pushed the bad times back into the shadows where they belonged. He brought the harmonica to his lips, cradling it with both hands, and blew a tune.

A heavy loneliness settled onto his shoulders, and he wondered who he hadn't seen today. Who he'd never see again.

That feeling of dread tickled at the back of his mind. Down the alley, his buddy Frank rooted around a bit then stood up straight, a smile stretching his face as he tossed a new treasure into the shopping cart he'd stolen from the Homeland grocery store down the street. The cart overflowed with junk, but Frank would protect it with his life.

Pete didn't even nod hello as he passed, but Roy didn't take it personally. Pete wasn't much for conversation. Near as Roy could tell, Pete had been a fine, upstanding citizen until one fateful day when he'd been driving his father to work and instead, in a moment of carelessness, ran a red light and delivered his old man to the reaper by way of a Mack truck. Pete's father had died badly in his arms.

Roy stopped playing the harmonica and sat down on a dry patch of sidewalk. The damp wind carried a song of warning. Its mournful voice whispered and moaned. Roy shivered in the cold air while whatever the wind said drifted out of reach like bits of a forgotten dream.

He wasn't surprised when the Reverend came up with a couple of Tulsa's finest trailing behind her. The Reverend tugged her heavy, black overcoat tightly around her thin frame. Age spots dotted her hands and cheeks. Her wild, silver hair waved in the breeze like a lion's mane.

Roy looked up at her. "Who was it this time?"

The Reverend choked on her reply and looked at the cops. The older man could stand to lose twenty pounds. His name badge read Thompson, and his gray eyes lacked the spark, the fire that burned in the younger man, Anderson. Neither spoke. Roy knew it was going to be bad.

She took a deep breath and shook her head. "Willie."

Roy closed his eyes. The Reverend laid a hand on his shoulder. Roy knew that she understood the loss of friends and loved ones. The Reverend's husband, Charles, passed away six years back, following a long battle with the Big C. After he died, the Reverend threw herself into her work. She went out of her way to help the homeless. She once admitted to Roy that without Charles, she felt as if she were completely lost.

Roy sat still a moment, letting the news sink in.

No more late-night stories or practical jokes. No more smiles or clever turns of phrase. No more walks in the park with Willie making up names and pasts for the people they saw.

If only Roy had tried to do something, maybe Willie would still be alive. He knew that was ridiculous, but he still felt guilty because Willie was his friend. He shook his head and forced himself to breathe.

"He was found in the field behind the mission," the Reverend said. "I'm sorry, Roy. I know you two were close."

"Yeah." Roy glanced at the two policemen who stood behind her. Let them wait, he thought.

Roy's mind came back to that thought. He tried to dodge it, to think about the Reverend and himself, but the fact was there, plain as day. His friend was dead. Just last night he and Willie had shared a cigarette and they'd laughed about some tall tale Willie told. Frank had been gullible enough to believe it. When Roy suggested they tell Frank the truth, Willie laughed and said they'd do that tomorrow. Now tomorrow would never come.

"Mr. Porter," said Anderson, "we need you to come with us." It wasn't a request.