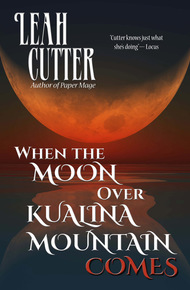 When the Moon Over Kualina Mountain Comes by Leah Cutter

Ephanie's first visions show her family her true path: not as a healer or a grower, but as a fortuneteller.

In order for Ephanie's newly born magic to flow, she must placate the goddess with life.

What happens when the biggest vision of Ephanie's young life pounces on her, unprepared? What, or who, must she kill to sate her need?

"When the Moon Over Kualina Mountain Comes" introduces diverse characters and wildly different magic systems in this dark, epic fantasy.

Leah Cutter seems to pleasant to write dark fiction, until you get her mad. And then you see the steel in her spine and the flash in her eyes, and you know that this is one woman you should never ever trifle with. When her fiction goes dark, she accesses that part of herself, and the energy just ripples off the page.

Leah's work always has an unusual point of view and goes in directions I never expect. I love to include her in Storybundles whenever I can because I love sharing what she does. I hope you will enjoy her fiction as much as I do. – Kristine Kathryn Rusch

Ephanie blows the petals down
And marks the end of spring
—Northern children's song, teaching the names of the winds

Ephanie scowled at the tiny mamapo'o plant in its woven cup. She squirmed on the hard bench in front of the work table, sweating in her apprentice robe. The bright blue material showed every wet patch—under her arms, across her shoulders, in the middle of her back—even though it was sleeveless and cut short, above her knees.

At least Ephanie was alone in the workroom, no one telling her to stop looking so angry. All the other apprentice growers had left for the heat of the afternoon, either sleeping in hammocks or swimming in the nearby lagoon.

Today, the mamapo'o plant wasn't much bigger than Ephanie's small palm. It would grow into a large bush in a few summers' time, with broad flat leaves the color of deep ocean water and bright red berries that fed songbirds all year round.

If Ephanie could make her magic work, she could grow the plant to full size in just a few days' time, just like all the other growers. Even the newest student among the growers—who was only eight and a whole year younger than Ephanie—could coax an easy plant like the mamapo'o to bloom. It just wasn't fair.

However, nothing Ephanie tried worked. She stroked the smooth brown stem, tracing a path around the leaves, encouraging the stem to go up, but it still didn't spring up. She tugged (gently, gently) on the each of the eleven leaves, but they didn't suddenly follow her fingers, lengthen, and grow. She prayed to Caduk, the traditional goddess of all the growers, using both formal prayers as well as sometimes begging for her help.

When Mama and the other teachers couldn't hear, Ephanie even tried praying to Kalluka, Ailani Island's goddess of the jungle.

But the mamapo'o plant stubbornly stayed the exact size it had always been, taking its own time to reach full height.

"Growers always take time to grow into their powers," Mama said frequently when Ephanie walked out of the workroom disappointed and upset.

Ephanie had only asked once, "But Mama, what if I'm not a grower?"

Maybe Ephanie didn't have any powers, and she'd have to change into the purple robes of a powerless girl. Maybe she wasn't a grower, a healer, or even a witch who received prophesies. Fortunetellers usually had their first vision by the time they were four, and Ephanie was well past that age. Healing powers generally came when a girl was six, but Ephanie couldn't understand how to close a cut at all, while growing powers came at eight. Now, at nine, Ephanie couldn't get any plants to grow.

Mama had turned her clear gray eyes on Ephanie and drawn herself up so she towered above her daughter. "You will not say such a thing. You are a witch of the north. Though some of the other witches, after two centuries living here on the southern islands, don't breed true, I have. Your power will come. Or else."

Ephanie hadn't dared asked what or else meant, but she suspected it wasn't good. She might get sent away to the head temple on the main island, like Nyandar had when she turned eleven and still hadn't found her powers.

Nyandar had never been allowed to come back home.

Or maybe Ephanie would be forced to live in the jungle all by herself, like Bircha the healer, who in the stories didn't find her powers until she was old and gray, and then been challenged by a river demon.

So Ephanie sat, hours after all the others had left, begging and pleading with the little plant, sometimes even cursing it, trying to make it grow.

The first vision pounced on Ephanie one year later, when she was ten. It came at night with heart-pounding surety, its need overwhelming her. She stumbled off her straw-stuffed mattress laying on the floor, the room dark and swaying like a boat staked to the shore when the waves came in.

All she craved was the life of something, anything, to satisfy the vision clawing to come out.

But what? The sheets at Ephanie's feet were long dead, though they'd once had been living plants. Pounded dirt made up the floor and wouldn't grow a thing, no matter how hard she'd tried. The thick woven rush mats that covered the dirt were also dead.

Ephanie felt her head turn. There. To the left.

A long, low table stood under the window, covered with Ephanie's plants. The ones she was supposed to grow. The ones that had defied her. Those green things she'd never been able to shape to her will.

Ephanie gasped. She wasn't a grower! Mama had been wrong. That wasn't Ephanie's power. She was a fortuneteller instead—a teller of prophesies that always came true. Why had her powers come so late?

What mattered was that Ephanie finally knew what she was, what she was supposed to do. She had found her destiny. She would have important visions. She just knew it.

For now, though, Ephanie had to feed this first vision. Gleefully, she marched over and yanked out the first seedling—another stupid mamapo'o plant.

With suddenly clever fingers, Ephanie twisted the stem and tore off the leaves. She threw the bare stem to the ground and stomped on it, pounding the stick into the dirt, squishing out what little life remained. Then, she tore the leaves into small pieces and left the pile on the table.

Teeth bared in joy, Ephanie attacked the next plant. And the next. Jaikulai. Poihu. Even the fragile ivy from the mainland, sickly in heat of the southern islands.

When the pile of leaf bits had grown to the size of a small melon, Ephanie stopped. She whined low in her throat, the sound loud in the quiet, moonlit room. She wanted to destroy all the plants, but this was enough. More would be too much, unnecessary. The goddess didn't need them.

Slowly, Ephanie gathered the leaf bits in both of her hands, then turned back toward the room. A prayer that she'd learned when she'd been younger sprang unbidden to her lips.

I delicate these lives to thee.

Let my telling be true.

Let my sight be clear.

So shall it be.

Ephanie cast the leaf bits into the air. A sudden wind flew from her hands as well, carrying the small pieces out across the room, causing them to fall into a specific pattern on the floor.

The leaves created easy, rolling lines that obviously made up waves. Another line, curved like half a melon rind, sat on top of them—a small boat.

Though the leaves showed just a straight stick resting in the boat, Ephanie knew who it was. She could see his face in her mind, brown and warm, particularly compared with her mother's pale white skin.

Nawai, her mother's lover, was coming home. He'd be arriving in the morning. He had left more than two weeks ago, going to the closest island to the east of Ailani Island to gather more of the beautiful white feathers of the imuaki bird, that he used making his cloaks.

Ephanie collapsed onto the floor. Exhaustion slammed into her, as if she'd been hoeing in the garden all day, working in the hot sun.

However, Ephanie couldn't rest. First one arm rose, then another, as if she were a puppet on stings. Slowly, Ephanie dragged herself to her feet.

She had to tell the owner of the fortune their fate. But who? Nawai knew he was coming. The fortune insisted that she tell Mama, though. Because Mama would care.

Ephanie lurched from her room, staggering the three steps to her mother's room.

Standing in the doorway, using a booming voice that didn't sound like her own, Ephanie announced, "Nawai is arriving in the morning."

Now, Ephanie could collapse. The strings holding her up snapped and she sank down where she was, the soft night taking her into dreamless sleep.