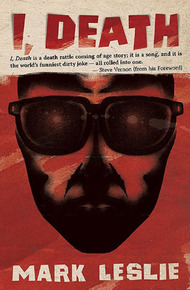 Mark Leslie has never made it a secret or lied about the fact he has always loved reading, books, and writing. And the only time he has lied about those the things that go bump in the night was when he told his toddler son, who was worried about the bogeyman, that monsters don't exist. That's because he knows they exist, and he has spent most of his life writing about both those monsters we can't see, like the ones under our beds and in our heads, as well as those perpetrating evil upon other humans.

Mark is the author of more than twenty-five novels, which include paranormal explorations of true ghost stories, unexplainable events, and true crime, thrillers, urban fantasy, horror, and the cross-over genre novels in his "Canadian Werewolf" series. When he is not writing, he can sometimes be found howling at the moon.

I, Death by Mark Leslie

It's tough enough when your girlfriend suddenly casts you a cold shoulder, your grades are slipping and those around you no longer understand what it's like to walk in your shoes; but living with the innate power to end lives—something Peter O'Mallick begins to realize he has had since birth—takes the angst to a whole new level.

Encouraged by his guidance counsellor, the suicidal seventeen year old begins to blog about his experiences to try to understand this power and himself. The self-directed therapy helps, and strangers who follow his online story virtually befriend him, as it appears that his curse is mostly limited to those he is in close contact with.

However, there is one stranger secretly following his story who isn't there to understand, help or cheer him on; just as Peter begins to understand that being born as a harbinger for death might actually be a blessing rather than a curse, this stranger is intent on finding a way to use Peter's power for nefarious purposes.

Mark Leslie writes horror and yet there's a sweetness to his fiction. Maybe that's because there's a sweetness to the man. He manages to find time to help his friends even though he has one of the most demanding jobs on the planet (in his alter ego as Mark Leslie Lefebvre of Kobo Writing Life). He also edits (not just for Fiction River, but other places as well) and he manages to write scary nonfiction about actual paranormal experiences around the globe. I tried to snatch one of those books for this bundle as well, but no such luck, since they had a different publisher. So you should look them up on your own, along with the rest of Mark's fiction. And his editing. And the podcast he does for Kobo. And…and…I get tired just thinking about his day. I really do. – Kristine Kathryn Rusch

I've been thinking a lot lately about what my guidance counselor said about writing it all down, and about that confessional site that the anonymous person posted. And thinking about Jagdish's death two months ago.

And it made me realize something. I've never spoken at all to a single person about what happened to my best friend Donnie when I was twelve. Yeah, I think I might have mentioned when I first started this blog about the fact that I lost my best friend.

But I don't think I talked about how it happened. And I know for sure that I've never let anyone know the exact details of what happened, or, more embarrassingly, how I'd reacted to it. And I don't think I can move on to deal with Jagdish's loss without going back and examining Donnie's tragic death and my involvement in it.

We were twelve and out hunting partridge with our .22s. Levack is pretty much surrounded by wilderness and so getting to the woods was easy, almost any direction that you walk. We headed into the woods down High Street, behind the school — behind what, at the time, used to be Levack District High School but is now Levack Public School.

Donnie and I were walking along with our rifles at our sides and pointed to the ground — sure, we followed at least one of the hunting safety guidelines, but we kept them loaded while we walked, eager not to miss the chance to shoot any partridge we stumbled across. We were walking down a trail when Donnie spotted a rabbit. It was a cute little white rabbit and it darted out on the trail in front of us. Donnie let out a startled laugh and raised his rifle towards it.

"No, Donnie," I suddenly blurted. For some reason it disturbed me that he was going to shoot the rabbit. I don't know why. Maybe it's because we were out looking for partridge, not rabbits. We weren't there to kill other animals. Something in my mind refused the idea. I wanted Donnie to stop.

Donnie glared at me, jumped off the trail and started running through the woods after the rabbit. He was laughing as he ran, and the entire time, I was hoping that he'd fall, stumble, and that the rabbit would get away. I watched as he ran, his head disappearing beneath the high growing ferns as he tried to duck and spot where the rabbit was heading.

I cringed when his head went down a final time and the rifle went off.

His head didn't pop up again. Instead, I heard a horrid, nasty wailing series of screams.

I dropped my own rifle and ran towards Donnie's screams. I found him laying on his back, looking up at me with one eye, his left. The other socket was a pool of flesh and blood and gunk, and a small trail of blood and fluid was leaking down his cheek. When he saw me, he stopped his screaming and reached toward me. "Peter," he said. "Help. My eye, my eye."

"Peter?" he said, sitting up, his one hand still reaching for me, his other hand starting to pawing madly at the side of his face, as if it were merely a bug sitting there that he wanted desperately to be rid of, not some sort of permanent damage.

I turned and ran from him.

And I kept running, screaming, trying to banish the image of my best friend sitting there, helplessly reaching toward me, the messy gore running down the side of his face. Trying to block the sound of his continued cries for help.

I kept running away, away from him, away from the scene of the accident. I'm not sure how long I ran, but I ended up collapsing at some point where I could no longer hear him calling for help. I sat there in the woods, listening to see if I could still hear him (I couldn't) and crying.

I'm not sure how long I sat there, but when I finally got up and started walking back in his direction, I was cold and very numb. As I got closer to where the accident had happened, I had this strange feeling of calm. The forest was quiet, silent. Donnie was no longer calling for help, or crying or screaming in pain. I wondered for a moment if I'd come in the wrong direction. But no, I was in the right place. There was my gun on the path where I'd dropped it after I first heard his scream of pain.

The forest was completely silent. The ferns just above where Donnie had fallen were blowing gently in the breeze. I picked up my rifle and started heading back out of the forest, back home.

I'm told that some adults found me walking down a street with my rifle, heading in the direction of home, my head downcast and my face white as a ghost. They'd known that Donnie and I were out hunting, and when they asked where Donnie was, I'd just pointed back towards the woods, my jaw hanging open, my eyes wide, my tongue like a thick wool blanket in my mouth.

When I eventually spoke, I told people about the accident, but not about how I'd run away from Donnie. Everyone assumed that I was in shock from the accident — but I was in shock because of my reaction to my friend crying out for help — and the fact that if I'd actually helped him, not left him lying there, then perhaps things would have been different.

Donnie didn't die right away. But when they found him, he'd already dropped into a coma. The bullet had done some damage to his brain, an infection had already started to spread. There was nothing anyone could do. He never came out of his coma, I never ended-up going to see him, and by the end of the week he had died.

No, the last image I'd had of Donnie, the one that stays with me today, is the image of him sitting on the forest floor, reaching towards me, asking for help.