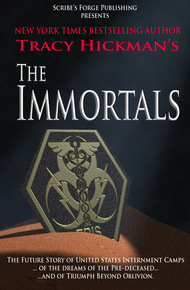 International and NYT Best-selling fantasy author Tracy Hickman is best known for the Dragonlance series of fantasy novels and has over fifty books in print. He is a pioneer of New Media Publishing and is the author of Wayne of Gotham, a Batman novel for DC Comics.

The Immortals by Tracy Hickman

Tracy Hickman is a legend in the fantasy field; his work in the DragonLance series helped shape the modern genre. I’ve taught at his side, he’s given me advice, and he’s inspired me. Let him take you on a quest. – Kevin J. Anderson

The chill wind rushed from the western desert and rustled eastward in desperate haste. It was no harbinger of spring. The constant, blustering gale flowed with frigid purpose across the Pine Valley Hardpan and over the Wah Wah Mountains. It cleared the sharp peaks and dropped down the easily receding slope to the Wah Wah Valley itself, crossing the ten miles of gentle desert floor before being confronted with the towering San Francisco Range. Those barren rocks were no friend either. The air itself seemed to recognize the inhospitable sentinels as an enemy to its very breath and pushed itself with renewed vigor. The wind never stops. It is a ghost of a life, condemned here to always blow over the desolate ground, forever hastening in fury to pass from the dead face of West Beaver County to lands and places more fertile and alive, which lie beyond.

P.T. sat on a wooden fruit crate as he gazed down the access road, the wind pushing his matted hair about his head. The Indian blanket draped over his shoulders flapped wildly in the gusts, threatening to flyaway from him and everything in the camp. He didn’t notice–fashion was not on his mind. His front-buttoned shirt may have once been white–small tears were noticeable in its fabric. It had a tailored look about it, but P.T. no longer filled it properly. The slacks were battered Armani, now secured precariously around his thinned waist with a tied cotton cord. The shoes may have also been Armani, but their leather was dull and cut in so many places as to make it impossible to tell. His ensemble was bizarre–in any event, it was completely inadequate in the cold flowing uncaring about him–but P.T. never took any notice of such things.

There was a watery brightness to P.T.’s eyes. One could almost forget to notice the three circles that discolored the center of his forehead. That faint mark was his common bond with all the other cattle in the camps. The rings were the mark of his kind–the sign of the beast–and marked that place where they had given him a gift. He reveled in the thought that in his forehead was a blessing that touched the sky. The satellites orbiting overhead could look down on this world and, 10, from the heavens, they did see him! The omnipresent electronic eye was always watching him. The brand made him special, but the device made him one with the cosmos.

His lower lip trembled slightly amid the gray stubble bristling on his face. P.T. rocked back and forth, his hand clutching a carved wooden slate in one hand while the fingertips of his other hand danced across its surface in sharp, purposeful patterns.

"Ref logit dbase datenow," he stuttered to himself in the cold, his eyes a fixed stare down the access road as he tapped the board in rhythm to his words. "Internees arrived gravlev train log systime. Log datenow, name, intcode, ref dbase omnet central."

The untrimmed nails clattered against the board. P.T.’s eyes flicked down from the road stretching to the south and fixed on the board. The dried pine had grayed over the last two months, and the details P.T. had carved so carefully into its surface had worn somewhat smooth with use. Yet they were, in his mind, as clear-edged and bright as new plastic.

P.T.’s eyes widened as he stared at the flat gray blankness of the board until the glistening whites could be seen all around the pupil. His jaw started working excitedly, uttering no sound in his excitement. His rocking became even more agitated as he suddenly found his voice.

"He… he’s coming! He’s coming!" P.T. wheezed to himself before succumbing to sudden uncontrollable giggles.

P.T. looked up sharply. His gaze fixed again past the three pairs of pillars that bracketed the road before him. Gates to the promised land, he thought. The Nulgravity fencing that extended to either side of the gates itself was invisible, of course, but its presence was all too easily discerned by the debris that had blown into it. Tumbleweeds, sticks, and even the dust itself hung suspended in a surreal curtain, especially on the outer-perimeter line. Occasionally, the powers-thatbe would turn off the fences in sequence, using alternating attractor-presser pulses to clear out the debris and keep the fencing invisible. But it never remained clear for long. The wind told him that she wouldn’t allow it.

The wind whispered to him often, but P.T. never trusted her. "Trust the Omnet," he giggled again. "The world’s knowledge at your command." Then he remembered again what he had seen in the blank wooden screen. He stood suddenly, his gaze still fixed down the road to the south.

The broad expanse of the desert beyond the dirty invisibility of the camp’s fence was rimmed by mountains whose gray was so dark as to give the appearance of soot. Despite the wind, nothing beyond the perimeter fence gave any sign of movement. There were no trees to bow or rustle in the wind. Even the sagebrush that grew was so stiff and obstinate that it only vibrated against the rustling gale. P.T. could see other camps in the valley, each just like his own. They dotted the valley floor with great brown ovals. The nearest was over three miles away-too far for anyone else in the camp to see if there were anyone alive or dead. Yet P. T. could see that far. P. T.’ s sight was far indeed.

Only the clouds moved with the wind over the valley, their dry puffiness dragging long shadows across the mountains and valley below. P.T. was patient. P.T. knew.

There! A slight swirl of dust between the mountains! A flicker of light! The old highway was bringing them in, bringing P.T. his world and his work. The gaunt scarecrow danced a little jig, the blanket flying from his shoulders, flapping down to the black-brown dirt landing yards from him and his crate.

The great dark worm on the highway slowed to a crawl and then turned toward him. The billowing dust suddenly became far more pronounced as the gravlev pallets left the broken paved highway for the straight line of the dirt access road.

P.T. stood on the crate and stretched his arms wide, his face pitched suddenly to the sky. The wind ruffled his shirt with frigid claws as he seemed in his own mind to fly. His upturned face screamed into the wind an incoherent cry merging smoothly into repeated words.

A tumbleweed stuck itself to the invisible fence.

The red lights atop the outer gateposts began flashing with the approaching pallets.

The grav modules affixed to the bottom of the transfer pallets increased their hum slightly as they slowed the momentum of the train. Dark figures huddled against the low railing of the pallet, its protection insufficient against the cold wind. Others stood in the center of the pallets, there being no room to do otherwise. Fifteen pallets in all, each ten feet wide and thirty feet long. The first two pallets, as always, contained children and therefore more than the usual hundred and twenty per unit.

The pallets floated slowly past the outer pillars and stopped. The red flashing lights of the outside perimeter stopped.

The flashing lights atop the inner and middle perimeters began to flash. For a moment the shivering sobs from the pallets nearly covered P.T.’s voice in the wind. The faces were new. The faces were the same. Round eyes watering in the wind. Tears flowing from eyes that had thought they had cried their last. Foreheads all marked–making them one with P.T.

And the children shall lead them. P.T. smiled at the thought.

The gravlev train hummed ever so slightly louder and slid between the last two gates. P.T. leaped down from his crate and snatched up his blanket from the dirt. He threw it over his shoulders without dusting it off, unknowing and uncaring about the cloud he raised about him. He stood, suddenly erect and with great dignity, clutching his weathered piece of carefully carved wood as though it were the tablets from Mount Sinai. He spoke in great sonorous and self-important tones. His audience of despair was drifting past him.

"Welcome to the promised land."