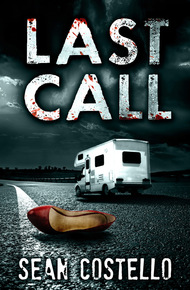 Sean Costello is the author of nine novels and numerous screenplays. His book Here After has been optioned to film by David Hackl, director of Saw V. Depending on the whims of his muse, Costello's stories alternate between two distinct genres: Horror and Thriller. His horror novels have drawn comparisons to the works of Stephen King, and his thrillers to those of Elmore Leonard. In the real world he's an anesthesiologist, but, if asked, he'd tell you he'd much rather be writing.

In the space of a single day, twenty-year-old Trish West purchases her first car, gets accepted into veterinary college, and meets her rockstar father, Jim Gamble, a man who vanished into the streets before she was born and now clings to life in a Toronto intensive care unit.

Eager to establish a relationship with Mr. Gamble, Trish heads out from her Northern Ontario home that very day to stand at his bedside. But along the way, she crosses paths with a man who will upend her life and the lives of everyone she cares about.

Meet Bobcat, a savage serial killer christened The Dentist by the press, a deranged trophy hunter who sees Trish as the ultimate prize.

For years, Mark Leslie has told me to read the work of Sean Costello, and finally, I got my chance. Fast-paced and thrilling, along with a vivid imagination, Sean's contribution to this bundle scares me. Plus, since he has kept his day job as an anesthesiologist, you know his medical details are right. I'm not sure if that's comforting or not… – Kristine Kathryn Rusch

SUMMER RAIN SWEPT through the alley in ragged, wind-driven columns, choking the storm drains and swamping the uneven pavement. At the dead end of the alley in an alcove of deep shadow, a Maytag dishwasher crate lay on its side, the open end protected from the downpour by a sheet of plastic secured by bricks. Inside the crate huddled a man in his forties, his only possessions the clothes on his back and the twenty-eight cents in panhandled change in his pocket. His skin beneath caked-on layers of grime was jaundiced, and his once clear eyes were rheumy and dull. His limbs bore the telltale pocks of needle sticks, and his scant urine was the color of bong water. People on the street called him CD.

When the rain started the night before, CD had been roaming his usual downtown haunts, stumbling and cursing in a drunken stupor, dully aware the bottle of Lysol he'd boosted from the Drug-Mart was almost empty but otherwise oblivious. When the cloudburst drenched him and he began to feel cold, he'd been standing at the mouth of this alley and had spotted the crate. He'd been hunkered inside ever since, sleepless and shivering.

Sometimes in the dark of the crate, CD had visions that might have been memories. In these visions he was a rock star, and like he told the bums he drank with, someday soon he was gonna get the band back together and cut a new album, only these days it wasn't albums anymore it was cds. They told him he was full of shit, but he knew he was a rock star because of the tattoo on his chest. It was just a matter of getting back with the boys.

Rain drummed on the roof of the enclosure, saturating the thick cardboard, and CD turned his yellow eyes up in time to see the bellied ceiling burst and a pocket of rainwater gush in to soak him to the bone. Cursing, he rolled onto his hands and knees, tenting the sheet of plastic with his shaggy head. For an instant the world careened and he thought he might black out...but he sucked in a lungful of damp air and held it until the feeling passed. Then he cuffed the plastic aside and got to his feet in the rain.

For a length of time that seemed infinite, CD had been capable of only two sensations: hunger and pain. The hunger was always on him, vast and unappeasable, but only when he fed it could he numb the pain. And the pain was awakening fast.

He fished the bottle of Lysol out of his pocket, drained off the last few ounces and tossed the empty aside. Then he headed for the street, singing in a rich, whiskey-hardened voice.

As he shuffled along, working the kinks out, he squinted through the rain to the street, fifty yards ahead. A Toronto Transit bus hissed past followed by a UPS van, and CD reckoned it'd be at least an hour before the liquor stores opened.

He fingered the change in his pocket and knew he had work to do.

That was when he spotted the lone figure at the mouth of the alley. The guy was leaning against the wall out there, smoking a cigarette, and even CD found this odd: standing in the rain with his face upturned like a man basking in August sunshine—and smoking.

CD licked his lips and weaved toward the street, rehearsing his standard spare-changing rap. But when he got within a few feet of the guy, seeing that hard profile now, as bereft of warmth as the sunless sky, some withered instinct urged him to keep walking, head downtown and find an easier mark.

"Hey, bro," CD said, unfazed when the man ignored him. The dude was bald, his shiny pate beaded with rain. CD said, "Me and my boys, we got this righteous band—Bad 'n' Rude, ever heard of us? We opened for Aerosmith once at the Garden—and we're gonna cut us a cd, soon as we can raise the green." Not bald, CD thought, that instinct twitching again. That big head is shaved. "So what do you say? Throw in a couple bucks, get your name in the credits?"

Do what the man says. "It don't have to be dollars. Change'll do—"

The guy turned to face him now and CD saw he was barely out of his teens, all thick muscle and sneering teeth.

Grinning, the guy said, "You want change?" and CD told his legs to go, but then the guy's arm pistoned out and fire erupted in CD's chest, and now the guy was advancing on him, a glint of steel in his outstretched hand.

CD broke into a shambling run, forced back into the alley. It was hard to breathe now, and the warmth on his chest where the guy had struck him was tacky and wet.

In his panic, CD lost his footing on the greasy pavement and plowed into a drift of trash bags. Hunched over, he could hear the wet suck of air in his chest and realized he'd been stabbed. Breathing was like inhaling shredded tin.

There was a steel service door at the end of the alley and CD threw himself against it, pounding on it with his fists now, the effort wrenching something deep in his chest. "Help," he said, the word sounding as if it had been spoken underwater. "Please, open the—"

A powerful hand spun him around and the knife flickered into his belly. CD doubled over and an iron forearm thrust him upright. The man pressed himself against CD with deviant intimacy.

The knife twisted and rose up and CD's feet left the ground. He had a shining moment of clarity then, and he remembered he'd once been a boy and life had been different then.

Blackness spiraled in like soot raised by giant rotors, and before he was lost in it CD had a thought which, even in his extremity, surprised him.