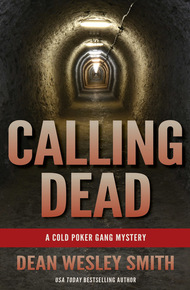 Deciding to tackle one of the coldest cold cases in the files, retired detectives Lott, Rogers, and Andor uncover far more than simple murder, and possibly the worst serial killer ever.

A twisted mystery that will keep you reading to the last page.

In the immortal words of Charlotte Brontë, "Reader, I married him." You'll see why that's such a confession after you read Calling Dead, a standalone novel in Dean's Cold Poker Gang series. As he wrote this, he kept telling me the novel was really twisted. He's not kidding. And yes, I married the mind that came up with all of this, because I find his brain fascinating. Does that scare you? Maybe it should… – Kristine Kathryn Rusch

DETECTIVE BAYARD LOTT stood in the old mine tunnel, staring at the eleven dead women sitting in a neat row on the dirt floor in front of him. Lott had his hands on his hips and was doing his best to keep his breathing level.

Not easy. Not easy at all with such a horrific sight.

The tunnel was supported by square and rough wooden pillars about a foot or so apart and not much more than six feet over the hard-dirt floor. The timbers looked old and very dry and some had visible rot on the edges. Dirt and dust filtered down in around the timbers with almost every sound.

It felt to Lott as if the entire thing might come down at any moment. He had always hated enclosed, tight spaces, and this mine was not helping that hatred in any way.

In fact, what he wanted to do was just turn and get out of there, but the bodies in front of him made that impossible.

He was only ten paces inside the boarded-up entrance. The light from the bright day outside helped his flashlight illuminate the scene clearly, while at the same time casting strange and odd-shaped deep black shadows that made the dead women seem even more horrific, if that was possible.

The heat had to be over a hundred inside the tunnel and the air felt used and contaminated with the death he faced. He was sweating, even though the August day outside hadn't gotten that hot yet. It would, later in the afternoon. He couldn't imagine staying in this mine very long now, let alone in the high heat of the desert summer day.

He knew that going deeper underground was cooler, but not this close to the surface in this kind of intense desert heat. This felt more like the interior of a closed-up car.

The smell was like a musty dry cloth that had gone sour. The stench clogged everything in Lott's senses, which was part of why he was breathing through his mouth instead of his nose.

Beside him, his partner, Detective Andor Williams, took slow, loud breaths through his mouth as well.

Andor was shorter than Lott's six feet by five inches, but was a bit wider. Standing side-by-side, they almost touched both sides of the mine walls with their shoulders. Lott's head was only a few inches under the closest timber holding up the dirt above and he had walked bent over to just get this far inside.

Now, seeing what was in here, neither one of them had wanted to take a step farther than what they had already done.

On the dirt floor in front of Lott, sitting with their backs against the left wall of the tunnel, legs stretched out on the dirt, were the eleven dead women. The women were mummified in the heat after clearly being in here for some time, their faces contorted and sunken-in with wrinkles that made them look ancient.

Lott had no doubt that the heat and the tunnel environment was going to make it hell to determine how long these poor women had been in this mine.

It might have been only weeks, but it could have been years. After decades of working as a cop in Las Vegas, Lott had seen heat do some amazing things to a dead human body, so the physical condition of the bodies was no surprise to him.

But what they wore was what surprised him.

Each woman had a black clutch purse on her lap, and her mummified hands covered the purse. Each woman was fully dressed in identical black skirts and white blouses, just sitting with their backs to the wall.

If that wasn't strange enough, they all had long dark hair, trimmed to exactly the same length and in exactly the same style. That, combined with the schoolgirl look of all of them, made the scene look more like a bunch of large wrinkled dolls sitting there instead of women.

Thankfully, all had their eyes closed.

"This is one sick mother who did this," Andor said softly.

Lott could only agree. He had no doubt this sight was going to give him nightmares for a very long time.

"Let's back out of here until forensics can clear the place," Lott said. "If we're lucky, we can just work off the pictures they take."

More than anything, he wanted to be out of that closed-in space and away from the dead women. As a detective, he had seen a lot of death and he had never gotten used to it.

Andor nodded and turned to head back to the mine entrance ten steps away. "Let's just hope the sick bastard who did this left the identifications of those women in those purses."

Lott took one more look back at the eleven dead women, their skin mummified, all dressed like a class of schoolgirls from a very strict school with a uniform dress code.

He turned to follow his partner back out into the warm and cleansing desert sunshine. He had a hunch that nothing about this case was going to be easy.

And that hunch proved to be very accurate.