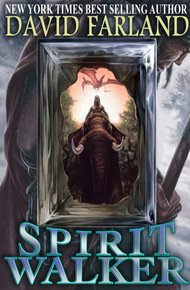 Long ago Earth's paleobiologists established the planet Anee as a vast storehouse of extinct species, each continent home to life forms of a different era. For a thousand years the starfarers' great sea serpents formed a wall of teeth and flesh that protected Smilodon Bay from the ravaging dinosaurs that swam across the ocean from Hotland. Now the serpents are gone and Anee is being ravaged by tyranny, war and slavery.

Tull, son to a human father and a Neanderthal mother, feels doomed to toil his life away as a common field hand, but his mission becomes clear when he takes action to save his homeland. Tull must seek a distant river in the slave nation of Craal, where young serpents can be found. Legend has it that Adjonai, the Neanderthal god of terror, is king of Craal. Yet only by facing this dark enemy can Tull hope to bring home his serpent catch alive.

This is the first installment of a four part series. Originally published under "Dave Wolverton."

I’ve known David Farland for almost my entire career, ever since he won one of the first Writers of the Future grand prizes for “On My Way to Paradise.” His work spans many genres, and it’s always good. He has also devoted much of his energy to teaching a new generation of writers. – Kevin J. Anderson

Tull felt teeth pierce his ankle, each tooth as sharp as flint, and heard bones crunching. Dimly he realized that it was dark, that he heard the growl of a great lizard. He kicked at the beast, struggling to rouse from his slumber.

"Yaagh," he called. Most dinosaurs in Hotland were afraid of men, and he hoped that his shout would startle whatever had seized him.

Fully awake, he realized that it was only a strong hand that held his ankle.

His good friend Ayuvah laughed at the joke. "Shitha!" Get up, Ayuvah said in the soft-nasal language of the Neanderthal, or Pwi, as they called themselves. "Tchima-zho, sepala-pi fe." I finish gladly, and take joy in my coming sleep.

Tull looked up into Ayuvah's face and blinked to clear his vision. The great moon Thor was up, a green-blue monstrosity in the sky, and though it was only a quarter full, Tull could see the young Neanderthal man well in its surface.

The warm night air around camp smelled thick with the scent of leatherwood honey. Tree frogs whistled in the darkness beyond the edge of the Neanderthals' little wooden fortress. Out across the plains, two male blue-crested hadrosaurs, with their long necks and duckbills, bellowed challenges to one another as they vied for a mate. The dinosaurs had been going at it solid for three days now in the valley below.

It must have been their calls that disturbed my sleep, Tull thought, and made me dream of predators. He felt glad that the honey harvest was almost finished. The hadrosaurs' mating challenges had drawn a tyrannosaur into the valley earlier in the day. Ayuvah had killed it with his spear, but more would follow. Soon they would hike to the ship and sail back home to Smilodon Bay.

Tull pulled off his blanket and stretched. Ayuvah handed him the telescope, along with a war horn made from the horn of an aurochs, then went to pick at the stew beside the fire.

"Adja, I fear," Ayuvah warned quietly. Because he did not say how much he feared, he meant that he was afraid of something unspecific. Seven other Pwi slept quietly around the camp, none of them snoring. The fire had burned down to red coals that glowed like malevolent eyes.

"What do you fear?" Tull asked softly.

"There is much movement in the valley tonight. The hadrosaurs are mating, and I saw two sailfin carnosaurs come up from the swamp. Many smaller dinosaurs are milling about, creatures that have been flushed from the woods. And I saw something else, I think," Ayuvah said, thoughtfully. "I believe I saw a lantern shining down by the wide spot in the river. But it was far away—and after a minute it went out."

"Perhaps it was only a will-o-wisp," Tull said hopefully. The swamp gases along the river sometimes vented at night.

Ayuvah shook his head. "I don't think so."

Only humans or Neanderthals would make fire, and few dared travel in this part of the world. Many young Pwi crossed the ocean at one time or another to steal dinosaur eggs in Hotland. Back on their home continent of Calla, the sailors paid well for the eggs, then sold them in distant ports to those who were foolish enough to hatch them just to see what kind of monster came out.

Ayuvah shook his head. "It is too late for egg raiders. Autumn will soon be here. I do not think that they would be Pwi. My kin will be going home to take in the harvest."

The Neanderthal was right. Only Scandal the Gourmet, with his love for leatherwood honey, paid men well enough to work in Hotland in this season.

"Besides," Ayuvah said. "Egg raiders would not hunt at night."

Tull hesitated to say his next word. "Slavers?"

"Maybe," Ayuvah said, nodding. "Twenty Pwi down from Wellen's Eyes went out on egg raid last spring—and none returned. Slavers could have captured them."

"I've never heard of slavers coming to Hotland," Tull said, but he wondered. Over the past several years, the predations of the Craal slavers had increased. Some Pwi even said that it was time to flee Calla to make a new home in Hotland, where the slavers would hesitate to follow.

Because Ayuvah's words made him nervous, Tull put on his war gear. He pulled a lacquered leather vest made of iguanodon hide over his naked chest, and sheathed his kutow, a double-headed battle ax, at his belt. He took his wooden spear and war shield, and slung the aurochs horn around his neck.

The fortress here was hidden. It was little more than rocks and a few poles bound together among some trees near the edge of a small pool.

His guard post was halfway up a large dead leatherwood tree, its ancient branches just high enough so that a man, resting in their gnarled crook, could survey the valley.

From the tree, Tull could see the plains all around. Though vegetation was trampled and sparse, a herd of two hundred triceratopses, each forty feet long, fed on shrubs in the dark grassland to the north. Leatherwood forests covered a row of hills to the east, and upon one hill two miles away, a small fire burned in a tree at the edge of the deep woods. Tull pulled the telescope from its case and studied the tree.

Denni and Tchar, two fourteen-year-old Neanderthals camped by the hollow leatherwood, smoking the honey bees into a stupor. A brazier hung beneath a hive by a chain. In the firelight, Tull could see blond-haired Denni coaxing the fire while Tchar slept. Good boy, Tull thought, to be so diligent. I'll have to remember to congratulate him in the morning.

Iguanodons, huge and gray in the moonlight, feasted near the boys on the last of summer's leaves. They were herd animals, large enough to scare off most smaller predators, alert enough to warn if something truly dangerous approached.

Good, Tull thought. The boys will be safe so long as the iguanodons stay near. Tull turned his spyglass off to the west, down to the wide spot in the river. Ayuvah was right. The brush was thick with movement. Too many dinosaurs were out, and they milled nervously through the brush, spooking at the smallest sound.

Tull studied the area. If someone had been down at the river carrying a lantern, then he might have seen the boys' fire burning in the leatherwood tree when he came round the river's bend. If the man were a slaver, he would then douse his lantern and sneak along the brush line like a wolf in the dark.

Tull wondered: if a dozen men crept through the brush by the river in the moonlight, would they scare the dinosaurs this much?

A dozen small oviraptors broke into the open, scurrying from the brush near the hills. He focused on the spot, but could see nothing in the trees.

Tull hissed through his teeth, fingered his war horn. Whatever had frightened them was close to the boys. Tchar and Denni were young, and if they got into trouble, they might not have the presence of mind to get themselves out. Yet Tull could not blow the war horn without revealing his position.

Should I warn them, he wondered, about something that might be nothing? Anything could have scared the oviraptors.

Below him at the pond, the tree frogs abruptly quit whistling as someone stepped into the water. Tull flinched, looked down. Ayuvah's younger sister, Fava, stood in the moonlight not eighty feet outside the fortress wall.

Fava was pretty, with sandy red hair. Her green eyes, uncommon among the Pwi, were set shallowly beneath her brows, which made her look more human than most deep-browed Neanderthals. Fava was a rarity, a purebred Pwi, not of mixed blood, like Tull.

Fava's bare legs were decorated with colored ribbons, symbolizing that she was still a maiden. Bending over, she untied the ribbons, as if she would bathe.

Tull's heart pounded, and he looked away as she began to strip off her summer tunic. He wondered if she knew that he was in the tree. How could she not know? he wondered. We always have a guard.