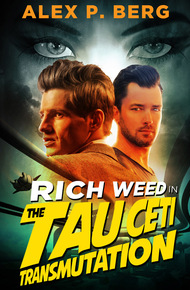 For private eye Rich Weed, the smart thing to do would've been to say no. No to the heart-stoppingly beautiful woman who sauntered through the front door. No to the case that smelled fishier than a Venusian squid farm. No to the thief who left behind more than he made off with. But no one's ever accused Rich of taking the easy path in life—or the smart one.

Now Rich is stuck in the thick of it, bouncing between clues as he tries to unravel a bizarre case of religious brainwashing—one that leads him from the mandibles of waffle-loving aliens to the unwashed hands of half-baked hippies and back. As the mystery thickens, only one thing is clear: as lovely as the client was, he really should've told her no.

I sighed as I finished yet another game of Smashblocks on my Brain.

Paige spoke in the back of my mind as the score flashed before my eyes. Over fourteen point six billion. Not too shabby. That's one of your top five scores of all time, if I'm not mistaken.

"Don't say it," I told Paige as I leaned back in my office chair.

I rapped my fingers on my desk. "That I'm pathetic. That I'm a loser. That I'm wasting my life playing these mind-dulling games."

Me? said Paige. I'd never say any of that, Rich.

I scoffed. Opportunities for sarcasm and belittlement rarely passed Paige by untouched, but to be fair, most of that was my fault. When I'd first initialized her, I'd chosen two primary personality parameters to help define her. I'd gone with bubbly and cynical.

While the result was interesting, to say the least, I sometimes regretted my flippant choice, but what could I do about it? I couldn't exactly tell Paige to take a hike. She was as much a part of me as my legs or my heart. And besides, I needed her to help run my Brain—the cybernetic implant that connected the near-infinite collected knowledge of the known sentient races directly into my gray matter. My Brain also interfaced with my central nervous system and sensory organs, allowing me to see, hear, smell, taste, and experience events the unconnected could only dream of.

I mostly used it to play Smashblocks and watch vids of dogs jumping on trampolines.

Paige snickered in the back of my mind. I let her mocking wash over me, placating myself with the knowledge that I was the only one who had to deal with her unique blend of wit and sass. Paige didn't really exist, you see. She was a digital imprint—a unique representation of a consciousness created by an enormous, hulking pile of servenets in a bunker somewhere in the bowels of Pylon Alpha, the capital city of Tau Ceti e, or Cetie as it was referred to colloquially. The servenets cultivated a different, tailored personality for every individual with a Brain. Instead of Paige, other people with Brains interacted with Bobs or Sallys or Qrtyfyls, depending on linguistic and cultural preferences.

Of course, I didn't have to suffer Paige's snappy retorts or her implications that I was a loser. I could send a request to the servenets to reconfigure her interactivity parameters at any time, but doing so would wipe out the fiery personality I'd spent a lifetime nurturing. Doing so, in my eyes, would be akin to murder. It would be like me taking an electromagnetic scrambler to Carl's computational core.

"I don't think Paige was implying you're a stain on society," said Carl as he crossed his legs.

I glanced at the slender, sharp-featured android sitting in the chair across from my desk, his medium-length blond hair perfectly coiffed in a factory-optional, mousse-heavy sweep cut. His given name was Carlton Weatherby, but I just called him Carl. My grandfather had purchased him a couple centuries ago when RAAI Corp first came out with their luxury line, envisioning him as an all-purpose manservant. Grandpappy had bequeathed him to me upon his death, but I found Carl's intellect and robotic skill set were wasted on buffing silverware. Instead, I'd purchased a buffbot for that, and Carl followed me around as my de facto partner.

Carl glanced at me from his perch on the velour sofa chair, the look on his face a mixture of uncertainty and concern. Despite his ability to interface directly with Paige through my Brain, he couldn't read my mind. I didn't let Paige share absolutely everything with him—just most of it.

"I feel like there's an unspoken but you wanted to add to the end of that sentence," I said.

Carl shifted uncomfortably. He was very sensitive to my emotional state. He couldn't help it. It was part of his programming.

"Well," said Carl. "It's just that… perhaps it's time to admit this latest enterprise of yours hasn't succeeded in quite the fashion you'd hoped."

I glanced across the office to my front door. The words etched into the frosted glass were reversed from my vantage point, but I could still read them.

"What are you trying to say?" I asked. "That I'm a failure? Because if so, that's a rather shortsighted viewpoint. I wasn't particularly suited to kickboxing or flightwing instruction or Brain app design either, but I gave all of those a fair shot before moving on to something else."

"Yes," said Carl. "But at least in those endeavors you actually received some level of business on a regular basis."

In a little over a standard galactic year since I'd established my latest venture, we'd had a grand total of three cases. Two had involved tracking down missing cats, and the third had revolved around a piece of missing jewelry that had eventually turned up outside the client's apartment complex embedded in a dog turd.

"Alright, maybe you have a point," I said. "But I'm no spring chicken. I can't keep zipping around on flightsuits or taking kicks for a living anymore."

While the first part of that is true, said Paige, the second part is only accurate from a historical perspective, and you know it.

I was eighty-five, but thanks to advances in medical technology and GenBorn's proprietary nanobot-driven rejuvenation services, I didn't look a standard galactic day older than an unmodified human at thirty. No one who enrolled in GenBorn's services did until they hit about the quarter millennia mark. At that point, even nanobots couldn't keep the corporeal self from falling apart. Of course, I also worked out regularly—a holdover from my kickboxing days—but I was fairly sure it was mostly the nanobots that kept me looking fresh.

"To be fair, you don't need to do much of anything," said Carl. "Between the revenue you generate off the land lease bequeathed to you by your great-grandfather and the annual government work stipend, you accrue far more income than you need to get by. This enterprise is purely for entertainment purposes. My point was that, if we're to apply ourselves to an occupation where we provide a service to the public, we should try to find one that has some demand—ideally one that puts your skills to good use."

"Well, that depends on your skill set," said Carl.

"You've known me my entire life," I said. "I'd think you'd know my strengths and weaknesses pretty well by now."

"I do," said Carl. "But I was hoping you'd been keeping something secret from me for the last eighty-five years."

"Because given my knowledge of your skills, talents, and attributes, I'm drawing a blank as to what profession you'd thrive at."

I frowned. "I think your compassion regulator is malfunctioning. You're not making me feel particularly sunny."

"I always try to be supportive, but not if the cost is a fictitious reality," said Carl. "It's better for your long term health and wellness for me to be honest."

I leaned back in my chair and ran a hand over my finger-length hair. Ever since I'd started my detective business, I'd taken to styling it with pomade. It added a glossy sheen to my matte black follicles which I thought gave me an air of debonairness, but I sometimes wondered if others thought it made me look unclean. I sighed as I dropped my hand back down.

Paige took note of my mood. Perhaps you could try a career in comedy.

I raised an eyebrow. "You think I'm funny?"

How funny you are is immaterial, Paige said. You just need people to laugh at you. That seems to happen with relative frequency.

"Did anyone else hear that?" I asked.

That's a rather silly question to pose, said Paige, seeing as my input feed consists of the collated total of your own sensory experiences.

"What I meant by that was if anyone knew what the sound was," I said. "Hopefully the landlord didn't rent the upstairs unit to a tap studio. He knows how much I hate syncopated musical arrangements."

"Nothing quite so conspiratorial, I think." Carl nodded his head toward the frosted glass showpiece that fronted my office. "It would appear someone's at the door."

A shadow on the other side of the door seemed to prove Carl's point.

I nearly did a double take, not only because the evidence suggested I might actually have a customer waiting to speak with me, but also because there appeared to be a real live flesh and blood—or possibly transistors and synthetics—individual waiting outside my office. Most people, whether human, alien, or droid, opted to communicate almost entirely via Brain messaging, so having a face-to-face visit was something of an anomaly.

The triple knock sounded again, and I waved hastily toward Carl. "Alright. This is it. Remember, we're a real professional investigative service. Stress that we have a 100% success rate in our cases—"

"All three of them…" said Carl.

As if we're the ones who need the soothing, said Paige.

My digital Brain companion was right. I took a deep breath to calm my nerves before speaking in my best measured, commanding voice. "Come in."