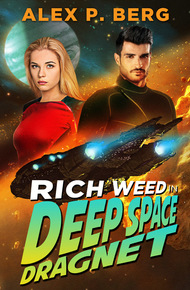 In space, no one can hear you scream—but that won't stop private eye Rich Weed from shrieking like a little girl.

He probably should've stayed gravity bound at home, but when a representative from transport titan InterSTELLA offers a chance at a wily gang of space pirates, how could Rich say no? Of course, the rep didn't mention Rich would have to join forces with a malcontent bounty hunter and a cow-like alien physicist with a limited grasp of the English language.

Now the bounty hunter's flying off the rails, the alien looks like a fraud, and everything about the case smells suspect. To make matters worse, the pirates are out for revenge—and they're coming for Rich.

I stood in an airlock on the Snowbell, listening to the rhythm of the pumps and feeling the light breeze of whistling air on my face when the ship's pseudogravity kicked in.

"Oh yeah. That's the ticket," I said as my feet settled against the floor.

Carl gave me a dubious glance. "You know, I'm well aware I can never fully understand your negative reaction to microgravity given I don't suffer the same physiological response as you, but is it really that bad? We were under the equivalent of one point six g's the entire trip over, barring the turn. You act as if you haven't felt solid ground underfoot for a month."

"As I've already mentioned, it's the transition that's problematic," I said. "And I agree with you one hundred percent. You can't ever know what it feels like to almost lose your lunch and have your heart jump into your throat. It's a horrible feeling, one nobody can fully acclimate to no matter how many times they go through it."

"Mr. Chatterjee doesn't seem to be suffering any ill effects."

Carl pointed him out. He stood with us in the airlock, his caramel-colored complexion looking no paler than normal, but his face betrayed something else. Impatience or uneasiness perhaps, but not from gastrointestinal distress. Rather, I got the impression he was claustrophobic. Either that or he didn't care for my company. He certainly hadn't engaged me in conversation during our trip over.

Could be he's an Intro, said Paige.

In his line of work? I said. Doubtful. Unless he's a desk jockey who's been plucked from his castle to take part in a recruiting expedition he has no interest in.

And you doubted my deductive reasoning, I chided her.

Carl continued to look at me, expecting an answer, but I gave him none. Hey, if the truth portrayed me in a less than glamorous light, I knew when to keep my mouth shut.

The interior airlock door opened, and Chatterjee waved us forward. "Follow me."

I stepped into a sterile, white-paneled hallway. According to the signage, we'd arrived at dock P7. Apparently the Snowbell was a big girl. Big enough for pseudogravity, anyway.

My footfalls made satisfying thumps as we walked after our uniformed commander-in-chief. "You know, Carl, I know you might think I complain too much, but it's visionaries like me who effect change."

He gave me a superbly lifted eyebrow. "Where are you going with this?"

"Pseudogravity," I said. "I don't like how it's limited to ships with larger masses and with fusion reactors that can produce ridiculous amounts of power. I want it on every ship, from the largest freighter to the smallest fighter. I make my thoughts known, as do other like minded individuals, and though the power of the free market, we effect change."

"You can't be serious," said Carl. "For one thing, the volume of your complaining has nothing to do with the purchasing power of your bank account. For another, moaning won't change the physical limitations of pseudogravity. It can't be implemented on smaller crafts. It's not possible."

"Please," I said. "You and I both know that's a load of Tak dung. All kinds of things are physically possible that we don't believe to be. If humanity had appeased itself with the physically likely, we'd still be scooting around at sub-light speed on rotating centrifuges powered by radioactive sludge and firing propellant out our—AHH!"

I screeched to a halt as we turned a corner, my face almost slamming into the slight, purple Spandette-clad bosom of Tarja Olli.

She glanced at Vijay, who'd barely slowed. "Is he serious?"

I'd tried a gentlemanly approach upon first introduction, but that hadn't worked, and my patience grew thinner with each of Tarja's nose-upturned remarks. "I'm right here you know. And what I meant was, how'd you beat us to the Snowbell?"

She dropped into step alongside Vijay and talked to me over her shoulder. "How fast were you going?"

"We pulled about one point six—"

"It was a rhetorical question," said Tarja. "I went faster than that and met you here, obviously."

She regarded me with cool eyes. "Let me guess. You think a tall, skinny Spacer like me can't handle multiple g's. I'm a frail flower that'll break under the slightest breeze."

"Flowers aren't usually as tall as you are," I said. "Plus they're pleasing to the senses. You're more like a twig embrittled by dry rot."

Tarja sniffed and turned her gaze back down the hall. "Well, at least he's got spine."

"Yes," I said. "A stout one that won't break under pressure."

I clenched my teeth and glanced at Carl. He shrugged in response. He wasn't good at conflict. It wasn't in his subroutines.

Far be it from me to meddle in a blossoming relationship, said Paige, but you do remember what you signed up for, right? You're going to have to work with this woman whether you like it or not. Might not hurt to put your best foot forward.

I sputtered a little. My best foot? I didn't start this fire.

You haven't lifted a finger to put it out either, said Paige. You seem intent on adding oxidizers to the flames.

Tarja proceeded, oblivious to my internal monologue. "So, Vijay, are you going to explain the situation with these pirates or what?"

"Once we reach my office and you meet Ducic, yes," he said. "I pinged him. He'll meet us there."

Honestly, I'd started to wonder about Chatterjee's steel trap-like jaw myself. He'd claimed he didn't want to explain himself more than once. I supposed that was possible, but we'd spent several hours together aboard the shuttle and the man hadn't uttered more than a couple words to me. Even for an Intro, he seemed particularly intent on avoiding conversation.

We followed Vijay through sterile corridors and a largely empty mess hall, passing the occasional InterSTELLA employee, some dressed in white police garb and others dressed in the traditional company navy blue. Engineers and scientists and maintenance crew, most likely. Some gave Chatterjee an approving head nod while others passed us by with nary a glance.

A door winked open in front of Vijay, and I followed him and Tarja through the gap.

The office within was cozy to say the least. Vijay skirted around a thin, molded plastic desk and pointed to a pair of stools on the other side. A holoprojector poked out from between the lights on the ceiling, and a large interactive display covered the right hand wall. The opposite wall featured built in shelving and cabinets, the free space of which was occupied by Vijay's personal effects: a photo projection of him with a dark haired woman and a scruffy-haired boy, a pair of framed golden service medals with InterSTELLA's logo wrapped around the edges, and a worn cricket bat with a wide signature scrawled across the front in indelible ink.

In front of all that, filling almost half the office and blocking my access to the stools, stood a droopy-eyed Tak.

The Taks were an interesting race—quadrupedal and beefy, with long torsos and undersized, rudimentary hands at the front of their bodies, almost as if they were the product of a horribly conceived gene splicing experiment between humans, rhinos, and giraffes. Their heads, however, were one hundred percent cow. Exobiologists would disagree, I'm sure, citing the flatness of their brows or the width of their nostrils, but to any independent observer like me, the only thing separating them from complete and total bovineness was their lack of ink spots.

As often as not they walked around naked, but this particular Tak wore a navy lab coat with a bright InterSTELLA insignia over the right breast pocket. He—She? It? Their gender was less obvious than our own—eyed me with disinterest. Or perhaps contempt. Or maybe he was drowsy. I couldn't read Tak body language very well.

Vijay waved to the two stools. "Go on. Have a seat."

Tarja helped herself to the stool by the display, leaving me the seat by the Tak. Carl didn't have muscles to rest, so it was mine for the taking, but it would be a tight fit. I'd have to press half my body against the beast's flank, never mind how I'd have to contort myself to get there in the first place.

The Tak noticed my hesitation. "Does my presence impede you, human? I am capable of rearrangement if necessity exits."

Even with universal Brain translation, Tak speech had a way of coming across as less than transparent. Something about the way our minds processed language and grammar didn't quite jive.

"No, don't worry about it," I said. "I'll be fine right here. Spare elbow room and all that." The door blinked shut behind me, clipping me on the rear.

Ducic shifted his snout. "I must inform you I am familiar with human expressive systems. Your passive expression of doubt has not gone unnoticed. If the underlying incertitude of your emotion stems from my race, I would point you in the direction of InterSTELLA workplace equality manual, chapter forty-four, section C. If said derision stems from my species' ability to conduct physics, that is perhaps a more egregious slight."

Tarja turned her head toward me, her cool eyes holding a twinkle of mirth. "You really need to pull that foot out of your mouth, tank."

"The name's Rich," I said. "Not tank or hoss or beefcake or whatever else you think is appropriate. My muscle tone is a gravitational side-effect. You got a problem with it?"

She smiled at me. "You'd rather I call you shorty?"

"Excellent," said Vijay. "Introductions are flying all around…alongside other things. Now if you don't mind, please SHUT UP and listen so I can brief you on the mission parameters!"

Vijay's cheeks had darkened, and his face showed signs of strain. I'd already caught a glimpse of the mountain on his shoulders, slowly crushing him under its pressure. I'd also guessed at his introversion. If I was right about it, having a quartet of humans, aliens, and droids in his office wasn't helping his hormone levels. Add to that my and everyone else's inability to conduct ourselves in a professional manner, and I'd argue his outburst was warranted.

"Sorry. I—we—shouldn't have acted that way." I eyed Tarja and Ducic to see if they agreed, but the bounty hunter had her back to me and I couldn't get a bead on the Tak because, well…cow face. "Let's talk pirates."