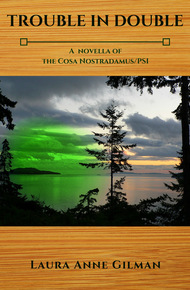 Pietr Cholis is a former paranormal investigator within the Cosa Nostradamus, the magical community. He wants nothing more than to drift through the days on Picker Island, several thousand miles away from his former life in New York City, with an injured piskie as a housemate, and friends who don't know what he used to do.

But when a newly-arrived couple decide that they'd like to get to know Pietr better - a LOT better - his life gets complicated again. Because the trouble they bring isn't all romantic, and suddenly his former profession isn't all that far away after all...

I'd been born poor, and grown up pretty. Which meant that trouble generally took one look and slung its arm over my shoulder like we were going to become best buddies. Even at sixteen, I'd been smart enough to know I needed better friends.

So I'd found a third way. Skill. Power. Reputation. Being known not only as a skilled Talent but as part of a team that could take you apart and then mail the remains home to momma, if we so desired.

It seemed like the solution of my dreams. If Benjamin Venec and Ian Stosser thought you were good enough to be an investigator, that meant that you were the one who went after trouble, and walked away the winner.

The problem with that is once you walk away, you have to keep walking away. Because trouble's a persistent bastard, once it's spotted you.

PUPI - Private, Unaffilated Paranormal Investigators - had started as a bright idea, to bring some sort of impartial order and accountability to crimes committed within the Cosa Nostradamus. The Cosa hadn't particularly wanted us at first. Or second, for that matter. Lonejacks didn't want anyone poking into their business, and the Council - well, they didn't like anyone poking into their business either, for different reasons entirely. But we'd dug in and made a name for ourselves among humans and fatae alike: impartial and unbribeable, and trust me, people tried. In under a decade, we'd grown into a multi-city organization, with our pick of the hotshot new Talent.

If you'd asked me at sixteen, I would have said once I knew how to kick trouble's ass, I'd never stop. But from sixteen to thirty is a long haul.

I'd worked the New York office for six years, then helped open the Chicago branch. And then… I was done. There hadn't been anything in particular that made me quit, just the feeling that I'd been in one place too long. That I was tempting fate by leaving my address the same for too long.

And maybe the suspicion that there were only so many times you could slip out from under trouble's arm before it got you in a stranglehold.

I'd been the only one to walk, which surprised me. I kept in touch - random pings from Nifty about closed cases, or asking my advice on a new experiment, the occasional fly-by visit from Sharon, and reasonably regular actual paper letters from Bonnie, filled with grumblings and complaints about her kids, her ex, her current lover, all underlaid with enough affection for them all I knew not to really worry. If they'd ever needed me, I'd have been back within twenty-four hours, and they all knew it. But they never asked.

For nine years after that, I traveled, pretty much nonstop. Not working, not planning, just…moving. I picked up a few new languages, a bunch of new cuisines, a few interesting scars, a terrifying understanding of multicultural layers of civic bribery, and how to pull current out of a solar generator.

And then I'd finally and utterly by accident landed on Picker Island, about three thousand miles and several lifetimes away from a high-end investigative agency in New York City. And somehow, for some reason, it'd stuck.