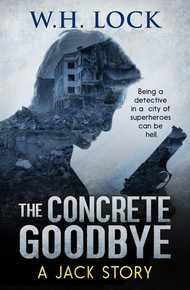 W.H. Lock is the author of the Jack Story series. He was born in Chicago, spent his angsty years in Minneapolis but somehow ended up in the Dallas/Fort Worth area with a wife and two sons. He makes his online home at www.whistlelock.com. You can follow him on Twitter at @whistlelock, on Facebook at facebook.com/whistlelock.

What's with all the whistlelocks? Well, you might be able to guess how he got that nickname, but if you buy him a few drinks when you meet at the next Con he might tell you the whole story.

The Concrete Goodbye by W.H. Lock

Being a Private Detective in a city filled with heroes is a dirty job but the money is clean.

Major Victory, the world's first super hero is being Blackmailed. The Major's granddaughter is an unwitting star of a sex tape. If the Major doesn't pay up, the world gets to see the video. The Major wants Jack to make the blackmail stop. Preferably with lots of pain being inflicted on the blackmailer.

Only a few hours after Jack takes the case, a bomb goes off downtown killing a young hero. The best friend of the Major's granddaughter. The granddaughter insists the bomb was really meant for her and not her best friend. That same supposed to be dead friend shows up in Jack's office hours after the explosion, claiming she was the target all along. She demands that Jack find out who's responsible before disappearing into the night.

But what will Jack do when he suspects that the one person behind it all is his client Major Victory?

In my line of work, jobs usually start with women. However, the professional slab of meat that stood in my office was unusual. It wasn't the two sizes too small Lycra mock turtleneck or the cheap sports coat with a bulge under his right arm. It certainly wasn't the way he'd insisted on wearing sunglasses inside that made him unusual .

"I don't care who your boss is, pal," I said. "I got all the business I want." I gestured to the empty waiting room. "I don't need to go chasing it down."

The lunk cocked his shaved head over to the side and pulled a thick envelope out of his jacket. It made a hard smacking sound when it hit my desk. The envelope opened as it slid toward me. More than a few bills peeked out sheepishly in the sudden daylight.

It had been a fair bit between cases, and the landlord had been tapping his wallet meaningfully every time he walked past my door. Still, I took my time and poured myself a drink. It was a bourbon I'd found from South Africa. At eighty proof it was a little light on its toes, but it packed a lot of flavor in those eighty grains. I let the moment breathe for a bit before leaning forward and fanning out the contents of the envelope.

"What do you think of that?" It wasn't really a question.

I flipped through the bills, seeing that they were a matched family of dead presidents. I immediately tripled my usual rates and said, "I think you're driving and you've got about three hours, so make it quick."

What was unusual about this guy is that he wanted me to make a house call. I don't normally make house calls. Near as I can figure it if a client really wants to bend my ear they can haul their sorrows down to my office and set to bending. But I made an exception for this one. Not because I owed him or his boss, although I did owe his boss something. I did it because of a singularly compelling reason: money.

We drove across town, taking the fast way to the Hill. The Hill wasn't so much a geographical zone as a metaphorical one. It encompassed the small suburban towns the rich and powerful preferred to build their private sanctuaries in. At the heart of it all was the man himself. The world's first superhero: Major Victory.

Ask just about anybody on the street and they knew the history of Major Victory. He'd been the surviving test subject in a program to create super soldiers in the early days of World War II. He'd led a successful invasion force in 1942 on Dieppe Beach in France, a precursor to D-Day, and acted as a living symbol of hope for the country throughout the war. He'd come home to keep fighting and make movies. He'd traded in Nazi's for Communist agents and subversive elements within the States. On silver screens, he continued to punch out Nazi goons for years after the war was over. When others followed his lead and donned a mask to fight crime, he formed the first real superhero group; the League of Liberty.

To this day the League represented the pinnacle of a super hero's success. To be invited to join the roster of League members was to be one of the most powerful and successful superheroes in the world.

Lunk pulled through a massive wrought iron gate with a remarkably plain brass V set in front of iron laurels. The V split in half as the gate opened, and we pulled through. The estate was keenly trimmed and neat, with a place for everything, and everything in its place. Lunk stopped the car in front of a fine example of American Gothic Castle architecture. The walls of the house towered above the ground and the windows kept a sharp lookout on the world surrounding the Victory family.

I stopped by Lunk's window and waited for him to roll it down. I peeled a couple of bills out of the envelope and said, "Keep it running for me, kid, I won't be long."

I threw the bills on his chest. He snorted at me.

The front door cracked open as I wiped my feet on the mat.

"We've been expecting you, Mr. Story," the Butler said. He stepped out of the way and gestured for me to enter the house. He was dressed like most of his ilk; a mostly tailored afternoon tuxedo with thick soled shoes for work. Fancy enough to impress the guest but not so fancy as to make the boss look shabby.

I handed the fellow my hat and walked into the house that Victory built. A man who was directly responsible for me being tortured for a year in a German POW camp. It has been almost seventy-four years since that day. I probably didn't hold a grudge anymore.