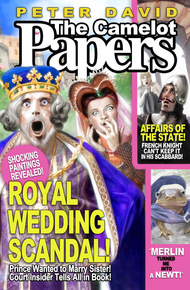 Peter David, writer of stuff, is a New York Times best-selling author of over one hundred novels. These include Fearless, Tigerheart, various novels published under the imprint of www.crazy8press.com, and many Star Trek novels for Pocket Books. He has also written over a thousand comics, including The Incredible Hulk, Fallen Angel, X-Factor, and Stephen King’s Dark Tower. He co-created the TV series Space Cases with Bill Mumy for Nickelodeon. Peter lives in Long Island with his wife, Kathleen, and has four daughters: Shana, Gwen, Ariel, and Caroline.

The Camelot Papers by Peter David

Pulled from the recently discovered journals of Viviana, a slave girl, "The Camelot Papers" provides a behind-the-scenes view of King Arthur's Camelot, in a tale unlike any version you've ever read.

Peter David is a funny guy, in person and in print. Read this—you’ll see what I mean. Don’t blame me if you laugh so hard that coffee comes out your nose. – Kevin J. Anderson

"Viviana." The servant frowned thoughtfully. "That is a French name, is it not?"

"In my case, Italian. Named for my mother."

"Italian. That is not the same as French?"

I did everything I could not to react to his stupidity. As much as King Pendragon had abused him, I was starting to think uncharitable thoughts, such as that it was amazing Pendragon had not simply slain him out of annoyance long before this. "No. Two languages, spoken in two different countries."

"Ah." He took that information in stride but did not seem inclined to ask after it further. Instead, as if the subject of other countries bored him, he said, "I hope you will not judge the king too harshly by what you saw."

"How else am I to judge other than by what I see?"

"A bad impression, is what I am saying. It could be misinterpreted."

"He wanted to ravage me."

"Well, yes, but what king would not?"

Bizarre as it sounded, I believed the servant actually intended that as a compliment. I could not bring myself, however, to thank him for it. Instead I said, "Many a king, I should hope. His actions were..." I searched for the least inflammatory word I could devise. "...uncharitable."

"One hopes you will be here long enough to change your mind. Here is the kitchen."

Through a creaking wooden door I heard the sounds of utensils being sharpened and meat being chopped. Simple-minded he may have been, but at least he did not get lost in his own castle. I glanced right and left, wanting to make certain no one overheard, for slaves cannot be too careful, and I said, "Truthfully, I do not know why you defend him. We both know he is a brute. I understand you feel a duty as his servant, but still..."

"Servant?" He seemed most amused by that. "I am not a servant."

I stared at him, terrified. "You...are the son of Uther Pendragon?"

Instantly I dropped to my knees, clutching at his breeches. "Forgive me, sire. I should not have spoken so out of turn, I...please do not have me executed..."

"Executed?" He stared at me in wonderment. "If I had everyone who said nasty things about my father or me executed, the castle would be nigh unto empty...as would the countryside, I daresay. No, no, do not you worry your little head about a thing. Just go about your business."

He walked away from me then, his hands draped behind his back, swaying slightly as he did so. "Everything is fine. Everything is perfectly fine."

This was no evil, conniving threat. This man, the one his father treated no better than a slave, was a simple-minded buffoon. An idiot, despised by his father, perhaps because he was clearly unfit to assume the throne upon Uther’s passing.

Fortunately enough, it was none of my concern. I did not expect to be a permanent resident of Camelot; slaves have a way of being passed around. Instead it brought me a degree of grim pleasure, knowing that at some point in the future, those who had smirked at me or tormented me upon my arrival would find their fates in the hands of an incompetent boob. They would be depending upon him to defend them from their enemies and, frankly, it boded well for the enemies.