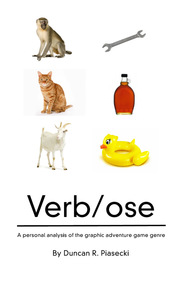 Duncan R. Piasecki lives in South Africa, and is presently a full-time student, working towards postgraduate qualification in philosophy. In his down time, when not studying or writing some weird new article or novel, he's an out-and-out nerd and geek, enjoying speculative fiction, animated films and television, and gaming.

Comparing over 70 games in the point-and-click adventure genre, spanning more than four decades of development, Verb/ose is an analysis of the genre as a whole, with a specific focus on graphic adventure games. From initial games that still required text input, to focus on the mouse as the main control method, to more modern takes on the genre, Verb/ose aims to examine, compare, and contrast these games with each other, seeing how they work, and what was a good and bad.

The genre is one of the oldest, but, for modern gamers who are new to it, it is also often one of the most impenetrable and clunky, so the aim is to generally demystify how all of it works for people who might never have touched one. The hope is, in doing so, and creating understanding of where the genre has been and where it is, that it will continue to thrive with new developments that both preserve the essence and learn from past rights and wrongs to properly update the genre for modern gamers.

Ah, graphic adventure games. I might associate with a lot of geekish folk, and I share many geekdoms with them all, but in the end, my passion for the genre of adventure game is one only I have. Granted, this genre is just a bit older than I am, and the Golden Age ended just as I was getting into it, so it's not entirely strange that others don't know the genre like I do. Plus, of course, I am the technomancer of the group, and considering the seeming complexity of getting older games to run on a modern computer, it's hardly something that most people would experience.

Of course, part of the problem lies within the very nature of the genre itself, too. It's intimidating to newcomers. Modern releases are less so, but still would take a modern gamer, who runs on the whole SHOOT EVERYTHING AND REGEN HEALTH mentality, a lot of adjustment to get used to. They're slower games. They require thought. And, they also require some ability with the interface. One does not simply click and shoot. One thinks, one examines, one talks, one combines items, one gets stuck for some extended periods of time, one wonders how the hell anyone ever got past that damn puzzle and saw the conclusion.

Cerebral gaming at its peak. No, hidden object does not count (and will get yelled at accordingly later on). And modern puzzle games barely count either, often being physics-related more than obtuse logic (which will also get yelled at later on... well, okay, less so than hidden object, probably).

Herein, for the enjoyment of many (or perhaps none), will be my outpouring of the passion. My legacy as a connoisseur of the genre. My fandom-driven critique of the genre as a whole. My experiences, my loves, my hates, my thoughts on the past, present, and future of where it was, is, and is going. Maybe in this wall of text (and pretty, pretty pictures), people will begin to understand my passion. Maybe, just maybe, people will be willing to take the first step, to plunge head-first into a complex gaming phenomenon.

If you're a veteran of the genre, I'm sure you'll understand a lot of what I'm going on about. But if you're completely new, well, this book may well go over your head a bit (I hope not), but if you press on, I hope you will better understand things. The best way to get what it's all about, though, would be to go ahead and give it a try by yourself. I don't wish to be exclusionary, since this is supposed to be written to try to re-energise the genre for today's gamer ultimately, but a lot of it is maybe a bit heavily theoretical.

But enough rambling. Let's get down to the book.

A good place to start as any would be for you, as the reader, to get to know a little more about me, and where I'm coming from in this whole mess. After all, my position in this all determines how I look at it, and if you understand a bit about my intersections with the genre, you might understand why we disagree on some key points.

Back in the late 1990s, I was given a gift for a birthday, if I recall correctly - a copy of The Curse of Monkey Island (1997). It ran slow as hell on my computer, and it challenged me, even with walkthrough in hand (sue me, I was younger than 10). The next year, I played it again. The next, again. I have successfully completed it a good few times, at least 5 at the time of writing, I would say, and that created a passion in me. I sought more, slowly (well, maybe not that slowly) played more over the years. I love the genre passionately, and I have experienced a good many games in it. I am also an analytical sort - over time, I've noticed things that worked, and things that have not.

So, in short: I have played these games for many years, and have played a good few titles with varying styles of gameplay. This is why you should read on.

But on the other hand, perhaps you should not. I may have played quite a few games, but frankly, my knowledge is perhaps a bit limited, because I can't have played all the games, and so I might miss something that one I haven't plays does that I didn't know about. I am most familiar with third-person graphical point-and-click, as I grew up with that, though I have played a good many games that do not fit in to that mould. I haven't had a lot of experience as yet with these newfangled Telltale bad decision simulators, but I plan to later on (and, if this book ever gets later editions, will write more about them then).

I've also had a thing against Sierra games for many, many years. I've started to play some Sierra games in recent years, but they still intimidate me to this day. I do not particularly fancy the concepts of Walking Death and Sudden Death (though I don't always mind Death in adventures games much, depending on the context - there are certainly some places I think it works right) in the genre. It makes me feel like I HAVE to cheat. If I want to complete the game without losing my sanity from having to redo huge sections time after time after time, it can feel like it is necessary for me to consult a walkthrough if I want any chance of finishing the game.

I have biases, and my knowledge is incomplete. This is why you should close this now and leave.

You're still here, despite all that? Oh good, let's get on with it then.