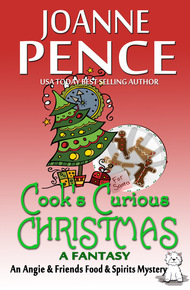 Joanne Pence is the USA Today best-selling author of two mystery series, the "Inspector Rebecca Mayfield" and the "Angie & Friends" mysteries. She has won a number of awards for her books, which include supernatural suspense, romantic suspense, and historical fiction. She hopes you'll enjoy her stories which present a variety of times, places, and reading experiences from mysterious to thrilling, emotional to lightly humorous, as well as powerful tales of times long past. Visit her at www.joannepence.com.

After a powerful earthquake strikes San Francisco, culinary sleuth Angie Amalfi finds herself in a different world, where nothing is as it should be, and nothing is as it seems. Not only are her fiancé and friends acting beyond weird, but it seems Angie is being stalked by "The Zodiac"—one of the Bay Area's most notorious serial killers ... from the 1970's! Join Angie on this magic sleigh ride straight into a Christmas stockingful of suspense. Although she struggles to find a way to stop this nightmare, in a season of surprises she finds herself feeling a lot like Alice in Wonderland as her once merry Christmas grows curiouser and curiouser...

USA Today bestselling author of two different major series. In this wonderful Christmas novel, Joanne takes us after an earthquake back with Angie, a culinary sleuth into a world where nothing is as it should be. Angie finds herself feeling a lot like Alice in Wonderland as her once merry Christmas grows very, very strange. You won't be able to put this one down. For more information about Joanne Pence's work, go to joannepence.com – Dean Wesley Smith

As Angelina Amalfi entered San Francisco's Washington Square, something felt wrong. Usually, even in winter, birds sang, seagulls soared, and flocks of pigeons pecked at the scraps people tossed their way. Now, none were present. While snow and freezing temperatures blanketed most of the country, the weather here was pleasantly cool and crisp. Yet the air was eerily still.

In five days it would be Christmas, and she was rushing to the post office to mail presents. Yes, she should have sent them off a week ago, but planning for her wedding was so time-consuming that everything else in her life seemed to be shunted aside, including Christmas.

The Christmas spirit wasn't even a flicker in her heart. This year, the holiday did nothing but create more hubbub and bother than she wanted to deal with.

On top of everything else, she couldn't even find a nearby parking space. Could the parking situation in San Francisco get any worse?

From the corner of her eye she saw a blur. It took a moment to realize it was her friend, Nona Farraday, running by. Truth be told, she and Nona weren't really friends. They had more of a mutual admiration-and-disdain relationship. Angie envied Nona's job as restaurant reviewer and writer for Haute Cuisine magazine, and Nona envied Angie's comfortable life and handsome fiancé, San Francisco Homicide Inspector Paavo Smith.

But why, Angie wondered, was Nona in such a hurry?

Angie scanned the direction Nona ran toward. The North Beach park had several areas with trees and bushes. She saw a young man with thick black hair crouching behind an elm. Was Nona looking for him? Who was he? And why, Angie wondered, was he hiding?

Then the trees began to sway.

The earth jolted in sharp side-to-side motions. Angie could barely stay on her feet, and staggered towards a park bench to hold onto the back so she wouldn't fall off her four-inch high heels. A roar filled her head, although she couldn't say if she heard an actual sound or if her eardrums were reacting to power and force and pressure.

Angie spun around to see some people drop to the ground while mothers captured their children in their arms, holding them close. People's screams matched the sound of the earth.

She was used to sudden rolling tremblers that rattled nerves and little else, and then ended almost as soon as they started. The bad quakes were the ones that went on and on, that continued long enough for a person to wonder, "What will I do if it doesn't stop?" Long enough to see, hear, and feel, the certainties of life crumbling all around.

Angie was young when the last big quake, the Loma Prieta, hit the Bay Area. Only because most people had left work early and were home turning on their TVs to watch baseball's "Bay Bridge World Series," was there relatively little loss of life despite a major freeway collapse and a chunk of the Bay Bridge's upper deck falling to the lower.

That quake seemed to go on forever.

So did this one.

Angie's prayers went immediately to the safety of her family and friends, as well as those around her.

Only a few feet away, two teenage girls huddled together, frozen to the spot, and above them, a tree limb swayed precariously.

"Get away!" The Christmas presents fell from her arms as she grabbed their wrists and pulled. The blond girl cooperated, but the brunette rebelled, and pulled back.

"Let go!" she yelled, twisting away from Angie's hold.

"A branch is about to fall!" Angie screamed. "You've got to run!"

The girl wouldn't stop fighting. Angie feared she would have to let go for her own safety. "Please," she said, and gave one last, mighty tug.