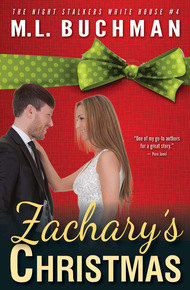 Vice President Zachary Thomas' political career thrives—his star shines brightly. The only thing missing? Someone to share it with.

Southern socialite Anne Darlington's brother embraces the White House career he was born to do. Unfortunately, Anne's own future shines as clearly as a snow globe blizzard on a dark winter's night.

He has no close family, she lives at the heart of a powerful Southern legacy. This holiday season, each day opens a new window to the vista of their future in Zachary's Christmas.

Bestselling author and three-time Top 10 Author of the Year by Booklist, M.L. Buchman writes in many genres. He's an acclaimed military romance writer, but he also writes some incredible fantasy and science fiction. Zachery's Christmas is set in the White House. Zachery is the Vice President, but is alone with no one to share the holiday with. The magic of the holidays soon change that. You can find out more about M.L. Buchman books at mlbuchman.com. – Dean Wesley Smith

Vice President Zachary Thomas heard the President's laugh from Daniel's office, so he turned in at the Chief of Staff's door rather than continuing down to the Oval. Janet offered her typical teasing smile—that of a woman on the verge of retirement who had offered more than once to run off to Tangiers with him—and waved him through.

"If only I were a few decades older, and we were both unwed," he told her. Janet had aged very well, but he'd met her very attentive husband.

"We need to be finding you a wife, Mr. Vice President. Or I will leave poor James for you."

"I just might take you up on that, ma'am. Best warn him to start looking." They traded winks then Zack strode up to the threshold.

Peter Matthews was the first President since Polk in the mid-1800s who wore his dark hair casually long—LBJ's gray coif had only appeared after his retirement. It made Peter look boyish and handsome, aided by being the youngest President ever elected. The gray that came with the office was only beginning to show. Daniel, his Chief of Staff, wore his blond hair short, but he had that California surfer-boy handsomeness despite his Tennessee farm heritage. Neither had the military bearing of having served, though it was hard to fault the choices the President had made over the years.

Zack was more of a tall Colorado boy—Colorado Springs born-and-buttered. It was a distinction little understood outside the state and one used carefully inside the state. His hometown had shrugged off almost all of its early counter-culture roots except in small outlier enclaves like Manitou Springs. Now it was known for one of three things: the US Olympic Training Center, the Air Force Academy, and headquarters for over fifty Evangelical churches. When spoken in-state, Zack only had to add one word, "I'm from The Springs…Academy." That was a whole conversation had, and answered. Out-of-state, he just said "Colorado" without even mentioning the city's name. It was easier that way.

Daniel sat as respectfully as always, perhaps sitting so carefully upright in order to be seen across the prairie-sized expanse of paperwork he called a desk. The President remained in his chair, looking more relaxed than Daniel, but proper as always.

Beside him, in profile, sat a woman with a beauty as surprising as Daniel's. They were obviously related, so this must be the sister he'd heard tales of but never met. Melanie Anne Darlington. Daniel's rugged handsomeness had been translated into her fine features; his short blond hair transformed into a sun-streaked cascade that spilled down over the furred collar of her oversized parka.

The mood in the room was an odd mixture. Daniel was confused and perhaps angry. The President and Daniel's sister were both laughing, hers a bright spill on the air.

"Hello, Mr. Vice President," Daniel spotted him and rose, just as he would for the President. It was always a kind compliment that his predecessor had certainly never offered…before he'd been hauled off for treason on other matters.

The President glanced over, "Hello, Zack."

The woman turned and the full impact of her sparkling eyes, the darkest blue he'd ever seen, almost had him stepping backwards. Behind those beautiful features was clearly a very sharp mind. And her beauty while not of some fantastical portion, was all the stronger for the woman who lived behind them; she was vibrant. A massive parka hung open from her shoulders, but the bulk made it difficult to assess her figure.

She looked up at him in surprise. She too had risen along with her brother but it was a fair way from his own six-two down to her five-foot-six.

"For the polar expedition that you're obviously leading," he clarified.

"Have to bring your own parka," her smile went from tentative to radiant.

"Done," he offered a hand and she shook it firmly. Fine fingers had nothing to do with this woman's obvious strength. "Zachary Thomas. But expedition leaders can call me Zack."

"Thank you, Mr. Vice President. I'll remember that. Anne Darlington, expedition leader." Then she turned back to the President. "See? At least one man in this administration has a decent sense of humor about my nice warm parka."

"Only happens around beautiful women,"—which she was and more. She had a much stronger accent than her brother, unmistakably Tennessee. Like a blond and slightly taller Holly Hunter who he'd always had a weak spot for in the movies. "You sound just like—"

"Don't you be doing that," she cut him off and shook a finger at him. "I do not sound like her. Not if you want to stay on my expedition. Besides, she's from Georgia. That's a whole different place," she pronounced 'whole' as if it had three or four Ls, exactly as Holly Hunter would have.

"Yes, ma'am," he saluted her sharply. Zack looked to Peter Matthews, "Should I come back later?" The tension still rippled about the room. Though no one had ever accused him of having a sense of humor before, she made him want to try. "In the meantime, if the lady would like, I can go out and rustle up a dog team with sled. That might prove difficult in Washington DC, but I'm willing to give it a go."

Again that laugh spilled forth so easily and brightened the room still further. Then she turned to her brother.

"Okay, Daniel, I'll make you a deal. One time offer, but you must decide right away. I'll go back to the farm, but only if I can take my team with me," she stepped over and hooked a hand about Zack's elbow to demonstrate their solidarity.

"I'm sorry, but you can't have him," Peter Matthews shook his head. "Zack still has a job here."

"With all due respect, Mr. President…Tough!"

Zack didn't even try to stop the laugh that come out of him as she faced down the President of the United States.

"This man here," she lifted Zack's elbow as if she needed to clarify which one, "applied, was accepted, and signed the ship's articles. He's mine now. Besides, I like his smile."

And when she smiled up at him, he couldn't help but return it.

"Hate to correct you, Ma'am. Truly I do," Zack should be backing away, this was Daniel's sister, but he was enjoying the little scene and the way her hand felt on his arm. "However, there are no ship's articles as I'm retired Air Force, not Navy. And I regret to inform you that I did swear before the nation to uphold this Vice Presidential office as well as several other odds and ends. Like, oh, the Constitution."

"Traitor!" She let go of his arm, clasped her hands over her heart, before collapsing back into her chair as if struck down. "I've been betrayed. I suppose you may have him back, Mr. President. I wouldn't trust him though. Far too honorable. Unlike me."

The President waved Zack to a seat. The only open one was close beside Ms. Darlington, which was just fine with him.

"So, what are we debating?"

"Whether or not Daniel and I should trade jobs. What do you think?"

He could only assume she was joking, but there was something in the President's look that made him less than certain. Normally that would cause Zack to approach such a question with caution and diplomacy. But with Anne Darlington sitting beside him…

Clambering back out of his chair, he grabbed Anne's wrist, dragged her to her feet, and tugged her around the desk after him.

She giggled, which was awfully cute on her. So he went with it.

"Out, Daniel. Out!" Zack shooed him away.

Daniel remained paralyzed for a second, then, puzzled, scrambled to his feet.

Zack bowed toward the woman as if she wore an evening gown rather than a heavy parka, jeans, and craftsman-stitched custom-made cowboy boots which said just as much as a designer gown would have about who she was. The Darlingtons weren't just Tennessee farmers; they were one of the power families of the South.

"My lady leader, your chair awaits."