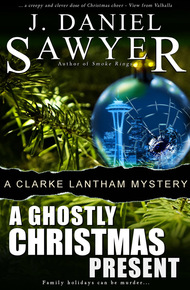 WHILE STAR WARS and STAR TREK seeded J. Daniel Sawyer's passion for the unknown, his childhood in academia gave him a deep love of history and an obsession with how the future emerges from the past.

This obsession led him through adventures in the film industry, the music industry, venture capital firms in the startup culture of Silicon Valley, and a career creating novels and audiobooks exploring the worlds that assemble themselves in his head.

His travels with bohemians, burners, historians, theologians, and inventors led him eventually to a rural exile where he uses the quiet to write, walk on the beach, and manage a production company that brings innovative stories to the ears of audiences across the world.

For crappy Christmas presents, Detective Clarke Lantham figures most people couldn't beat getting thrown in an out-of-state jail on a trumped up charge. So when he calls up his brother for help with bail, he thinks he's prepared for the ordeal of spending a holiday weekend with relatives who put the "strange" back in "estranged.

That was his first mistake.

And with an old client gumming up the works, a ten-year-old niece with a ghost problem, and an occasional murder competing for his attention, his next mistake might get him killed.

Dan is the author of over twenty novels and a ton of short fiction. He is also an expert in the strange worlds of audio and podcasting. He writes across genres, which is why A Ghostly Christmas is so much fun. Not only does it have a detective in it, stuck going home for the holidays to a very weird family, including a niece with a "ghost problem," but the poor guy must try to stay alive while solving a murder or two. Not his family, even though he thinks about that. For more information about Dan, go to jdsawyer.net – Dean Wesley Smith

It's a special sound to hear on Christmas Eve morning, more distinctive than any Salvation Army bell. Immediately before you hear it, some gruff guard is liable to bellow out an "all clear"—but I wouldn't count on it. Like cops, prison guards come in two flavors: the compassionate ones that wanted to make the world a better place, and the abused kids that grew up to be bullies. Cops—well, cops in well-run departments—tend to tilt toward the former. Prison guards tend to tilt the other way, so if your hand gets crushed when the gate closes, it's more entertainment for them.

They sure as hell didn't know what to do with me. They kept looking at me and saying "you don't belong here," even during the strip search.

Of course, in this podunk Twin Peaks wannabe town, the sheriff's deputy that threw me in here claimed they didn't have any room left in the holding tank because of too many drunks. Besides, I used to be a cop. I'd be fine in lockup, right?

Naturally, they stuck me with the big mean-looking dude who would've been called "Bubba" in any prison movie. That he introduced himself as "Manny," and had about a third grade education, gave the enterprise just enough pathetic to keep me fighting back my menacing laughter.

"You an' me's cellies now, boy." On anyone else, that squeaky voice would be a dead giveaway that his balls were just starting to drop, except this guy was easily twenty five and, judging by the swastika on his shaved head and the Black Power tattoo on his left shoulder, a confused victim of identity politics. Hearing him schlep up behind me like he expected me to beg his favor wasn't one of the more companionable roommate experiences I've ever had, and I went to school at U.C. Santa Cruz. "You's gonna be my good boy and I'll make sure life is real purdy for ya."

I heard fly buttons pop open behind me. In jail for fifteen minutes, and I already got an overgrown third grader trying to play doctor with me. Joy to the world, my cell-mate wants to come.

I stepped back from the bars until I bumped into him and said, in my best quavery scared-as-hell coward voice, "You promise? Thanks, man." I reached back 'til I found his hip, snaked my hand down to his balls, and got a good handful. Then, I gave them a nice squeeze and a slow twist.

"Ooh, that's right boy, jes...ow! What the..." I clamped down so hard he couldn't do anything but grab the bunk and try to stay upright so I didn't take his nuts off if he fell backward.

Another really good twist, and a little more pressure, I turned around to make sure I had his undivided attention. "Oh come on now, Immanuel. I'm not your captive." Yeah, I was in that kind of mood. Endless Christmas music in hotel lobbies does that to me.

He squeezed out a "Huh?" between groans and failed attempts to scream.

"So here's the deal. We're gonna be pals. You and me, all the way. But I ain't your catcher, or I'll take these," I gave his jewels another twist, "and make 'em into a necklace. You got me?"

Staring down a guy four inches taller and a couple hundred pounds heavier than you isn't exactly a trick you learn in kindergarten. Time on the beat has its advantages.

He gritted his teeth. Sweat beads coming up on his head now. Face red as Rudolph's nose. Kept him in too much pain for the adrenaline to help him any. Good thing too—he could've made a smoothie out of me without trying. But after this much pain, I was banking that he'd need to sleep off the testicle torsion before he got his revenge. A bit of a gamble: there weren't any scheduled activities for a couple hours yet, so I was stuck in here with him.

And he wasn't answering my question.

"I said," I scooted close enough that he tried to retreat. Coach, we have a first down. "Do you got me?"

He still didn't say anything.

"Look, if you don't answer me, I might just have to blow you. And I haven't had breakfast yet today." I squeezed a little harder. Much harder and I might actually break something. "So, you got me?"

"Yeah, yeah, goddammit, I got ya," he squeaked.

"Good man." I let go all at once and gave him a gentle push. He collapsed on the bed with his hands cradling his genitals, and curled into a fetal position with his ass hanging out of his drawers.

Well, there was gonna be a full moon tonight. Might as well start early.

I turned my attention back to the view out the bars and ran over my less-than-dignified Christmas Eve.

Count on the idiot named "Clarke Lantham" to provoke a cop just because the cop was a prick. Count on him to do it in a state where his lawyer wasn't a member of the bar, and the only person he could call was the brother whom he'd deliberately avoided telling he was in town. And then, count on that same self-professed idiot to do it all when he was trying to get home by rental car to see to a business emergency.

Yeah, there's some things only the ass-end of a set of prison bars can teach you. Chief among them being: "Don't try to find a way out of Sea-Tac through the suburbs when a snowstorm closes the airport."

Granted, it isn't the kind of fortune-cookie proverb that's likely to come in handy every day, but if the waitress at the Hilton had been kind enough to scribble it on my receipt this morning I'd be at least a whole mile south of the airport by now, without having the extra helping of testicles before lunch.

If I'm gonna be honest, though—and, when you're standing in a prison cell with a four-hundred-pound six-foot-five cellie snoring like a polar bear with flu, there isn't much sense in creative self-deception—my assistant Rachel pegged my first mistake during our phone meeting yesterday. Her typically genteel appraisal of my situation ran something along the lines of "Jesus Christ, Lantham, only you would go to an insurance convention in Seattle in the middle of inheritance season and not check the weather report. How the hell did you stay in business before you hired me?"

She was gonna crap fresh grapefruits when she heard about my current predicament. Top of my agenda was not letting her find out yet—last thing I needed this morning was guff from my twenty-year-old underpaid gothy employee. Particularly when she was right about it.