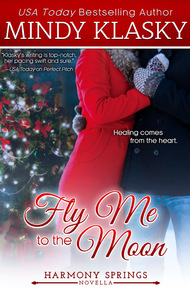 USA Today bestselling author Mindy Klasky learned to read when her parents shoved a book in her hands and told her she could travel anywhere through stories. As a writer, Mindy has traveled through various genres, including cozy paranormal, hot contemporary romance, and traditional fantasy. In her spare time, Mindy knits, quilts, and tries to tame her to-be-read shelf.

Fly Me to the Moon by Mindy Klasky

Lexi Taylor never let herself be defined by the fire that burned her when she was just a kid. Now, she happily works at The Christmas Cat, a year-round holiday boutique. So what if she wears long sleeves to hide her scars? Who cares if her relationships don't last long enough for a lover to see her damaged back?

Tom "Finn" Finnegan is one week out of the Army, fresh from Afghanistan. He vowed to visit the parents of J-Dawg, his best friend who was killed by a roadside bomb almost a year ago. But promises are easier made than kept—especially when J-Dawg haunts Finn's dreams.

When he literally stumbles into The Christmas Cat, Finn shatters dozens of ornaments, not to mention Lexi's peace of mind. The only way he can repay her is to take on handyman work in her store. But "other duties as assigned" takes on new meaning when sparks sizzle between the couple. Can Lexi and Finn find the key to healing each other's scars as Christmas approaches in Harmony Springs?

A USA Today bestselling writer, Mindy has written dozens and dozens of realistic feeling novels. In this magical Christmas novel, Fly Me To the Moon, Mindy takes us to The Christmas Cat, a year-round holiday boutique, where two wonderful characters meet. Both are scarred from their pasts both mentally and physically and with the Christmas holiday approaching, can they find a way to help each other heal? Heartwarming as any good Christmas story should be. For more information about Mindy's fantastic worlds, go to mindyklasky.com – Dean Wesley Smith

The entire room was filled with crap. From trees that loomed into the aisles to little round tables boobytrapped with breakable ornaments, every surface sparkled and shone and screamed about merry fucking Christmas.

Automatically, Finn swept his gaze around the shop's four walls, glancing past the two women to the open door at the back. He could hear someone moving back there, shifting things around, and the muscles in his chest automatically grew tight.

Shit. Stand down Sergeant Finnegan. You're in Harmony Springs, Virginia, not Parwan Province.

He was a civilian now, had been for one full week, and the sooner his overclocked alarm system got the message, the better.

He swallowed a foul taste at the back of his throat and said, "I'm looking for a present."

He shouldn't have come in here. There was a florist's shop a few doors down. He could have bought a wicked big poinsettia there and been done. Or the liquor store, at the edge of town. He could have picked up a bottle, something decent enough to give as a gift. Tossed in some Jack for himself. Or Wild Turkey. Both.

The woman with the coffee didn't work here. She hadn't said a word. Plus, she had stains on her sweater—egg maybe, and maple syrup, grease along both cuffs. Her hair was pulled back tight, and she wore thick-soled shoes. She was a cook, somewhere where she had to be on her feet most of the day.

He dismissed her as a threat. That left the other one, the woman behind the counter. She was dressed in some sort of costume, like an old-fashioned schoolmarm in one of those crappy westerns J-Dawg loved to watch, Gunsmoke or Bonanza or whatever else he managed to dig up online. Her high-necked white blouse tucked into a floor-length red skirt that was covered with holly and bells and shit. Add a head covering, and she'd fit right in, back in Afghanistan.

But he was sort of glad her hair wasn't covered up. Not with the way it fell around her face, tumbling past her shoulders in rough curls, like she'd just woken up and was ready to—

"A present?" she said brightly, her lips soft and red, like she'd been sucking on a cherry Popsicle. "For whom?"

Whom. Yeah. She was totally a schoolmarm. And he'd better get his mind out of the gutter before he made a fool out of himself. More of a fool than he already had, standing there like he'd forgotten the English language.

He shifted his weight and ordered his body to stop acting like he was a teen-age boy. Or a soldier who'd only been stateside for seven days. He kept his hands in his pockets.

"It's a, what do you call it? A hostess gift. I'm going to someone's house, and I don't want to show up empty-handed."

The woman flashed him a blinding smile. It wasn't possible for anyone to be that goddamn cheerful. He felt like he was in some Disney version of small-town America, where the fucking rabbits and sparrows danced around in circles. At least the woman didn't burst out singing when she asked, "Do you know anything about them? Hobbies, maybe? Or things they like? Dogs or cats, maybe?"

Yeah. They liked their son. Until he was blown up by an IED a few clicks north of Kabul.

Finn rubbed his left biceps, telling himself to ignore the itch that said the tat was healing. JLD. 12/24/14. Not that he needed ink to remember the date.

Coffee Woman cleared her throat, like she was rushing him to answer. Schoolmarm's smile was getting a little weak around the corners. He shook his head and ran a quick hand down his face, coming up with a stiff grin that was supposed to be disarming. "Sorry," he said. "I don't know them well."

"Is it for someone here in town? Maybe I can point you in the right direction."

Both women tightened up at the name. He watched Schoolmarm's lips pull into a tight O, and her eyes narrowed as she looked more closely at his stiff new clothes, at the boots he hadn't even started to break in. Now she'd pegged him as military. Not that it took a PhD in psychology.

She knew the Dawsons, knew about J-Dawg. Everyone knew everyone in Harmony Springs. That's why J-Dawg had gotten away as fast as he had, taking the first bus out of town the day after he'd graduated high school.

Schoolmarm was a professional, though. She pasted a Merry Christmas smile on her lips in the time it took for her to swallow. "Susan collects Holiday Town," she said. He must have looked as confused as he felt, because she waved her left hand toward the back corner of the shop. "Those little buildings on the back table. The ones around the mirror lake. I keep a list of the ones she already owns, to help out her husband. To help Jon."

His gut tightened at the name, but he made himself say, "Thanks." Feeling like a linebacker at the ballet, he edged past silent Coffee Woman, making his way toward the corner the other woman had indicated. That meant getting by a display of stuffed animals—reindeer and polar bears and moose—without knocking any of them over. He had to skirt half a dozen crèches, too, each one cluttered with carved characters, each one built around a smiling baby Jesus.

One entire tree was filled with moon-shaped ornaments. There were round balls, some gleaming silver, others dark as slate. A few had craters like miniature globes. There were a lot of crescent moons, each with a laughing face. Some were made out of painted wood and others were brightly-colored plastic. Black cats camped out on some of the moons, and stars gleamed behind a couple. There were dozens of them—every one different, every one catching the light and throwing it back into the shop.

Conscious of the women behind him, he was determined not to turn around, not to back himself into more awkward conversation. When he finally made it to the far corner, he saw what she meant by a mirror lake. Cotton stuffing was layered around a silver circle, with little buildings scattered in the pretend snow. There was a church and a general store, a post office and a livery barn. A dozen houses crowded around the "lake," choking on wreaths and bunting and bows.

Finn picked up a barber shop, complete with its red, white, and blue pole. He turned it over to check the price and couldn't help wincing. That would buy one hell of a nice bottle at the packie on the edge of town. Or enough cheap booze to last him the rest of the month. Well, the week, anyway, at the rate he was going through it.

But the woman behind the counter said Susan Dawson liked this crap, that J-Dawg had already given her some. She'd cry when she opened whatever he brought her.

She was going to end up crying anyway. They all would, unless he drank enough to get numb before they started swapping stories. Hell, that was the whole reason he'd come here, to the middle of fucking nowhere. To meet the Dawg's family. To tell them it had happened fast. There hadn't been time to feel pain. To be afraid.

He squared his shoulders like he was picking up his pack for an all-day march. Buy the damn thing and be done with it. Sure, he was short on cash. But that's what credit cards were for. And once he got his shit together, once he filed the goddamn severance paperwork, got the VA on his case, found a job… Another hundred bucks wasn't going to make a difference.

He looked back at Schoolmarm. "What about this one?" he asked. "Does she have one of these?"

Another blinding smile. Christ. No one could be that happy. Ever.

"Let me check," she said, reaching beneath the counter and pulling up a laptop computer. She typed with one hand, her fingers flying across the keyboard. A tiny frown settled between her eyebrows.

He sighed, already knowing what she was going to say. He'd have to choose something else. Before he could turn back to the town, though, a shot rang out, loud and sharp and clear.