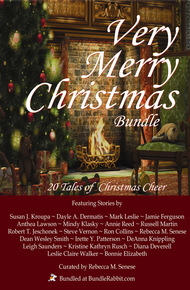 Christmas: a time of family, friends, joy, merriment, and gifts.

Unwrap these 20 Christmas tales and find a wealth of Christmas delights. From action to urban fantasy, science fiction to women's fiction, crime to romance, bitter-sweetness to silly fun, you will find a Christmas tale for all occasions.

Give yourself the gift of reading these Christmas stories and have a Very Merry Christmas!

Rebecca Senese is the outstanding editor of this fantastic volume of short fiction called Very Merry Christmas Bundle. The collection contains over twenty stories about the time of family, friends, joy, and merriment. And gifts. Especially gifts. Rebecca not only edits, but is a top Canadian writer whose wonderful and unique short stories have sold around the world. She told me she hopes to do a series of these collections she is calling a bundle. I think you will really enjoy these stories and want the next one when it comes out, actually. For more information go to rebeccasenese.com – Dean Wesley Smith

iljagaur was just tidying up his station in the main room of the Elves' Workshop when Kertasnikir burst through the door.

Kert skidded to a stop by Gil's side. The points on his big ears quivered as he gulped for air. Melting snow dotted his green velvet vest, the good one that he wore for the special feast Mrs. Claus laid out for the Elves every Christmas Eve while Santa was on his deliveries.

Gil couldn't believe his eyes. How could Kert let himself get all wet and messy right before the feast? What an insult to Mrs. Claus.

"Look at you," he said. "I'm almost finished here then I'll take you back to the dormitory. My magic clothes chest is faster than yours. It will clean up that stain like that." He snapped his fingers to show Kert how fast.

But Kert waved his arms.

"Santa! Have you seen Santa?"

"No, I've been cleaning my station." Gil spread his hands to show off the polished wood surface, his tools all straight and organized in a line across the top, and his wooden stool with the padded red seat, all neatly pushed under the table. "Why?"

Kert swooned. Gil grabbed his shoulders to steady him.

"Kert, what is it? What happened?"

Gil felt his friend's entire body quivering under his hands. He'd never seen Kert like this.

It couldn't be good.

"It's a disaster, a catastrophe!"

"Present," Kert said. "Found it behind a stacking crate in the staging area. It must have fallen…"

Gil felt a cold seep into him that had nothing to do with the North Pole.

"Santa left a toy behind."

They burst from the workshop at a mad run. Freezing air stung Gil's lips. His boots pounded the hard snow.

Christmas Eve at the North Pole was a magical night of cold crispness. The sky was a blanket of darkness above their heads, the stars winking and twinkling, barely illuminating the white wooden buildings of the village.

As they sprinted past the Elves' dormitory, Gil gave a wistful glance at the single storey building. Glowing red, blue, and green lights were strung along the peaked roof and down each join. He should be going back to his bunk to for one last tidy up before presenting himself at the Claus house.

Even though he never felt comfortable, Mrs. Claus insisted every Elf enter through the front door like a real guest. Gil preferred going in through the back door. Somehow that slim, white wooden door always made him more at ease. The huge, dark oak of the front door was far too intimidating with the carved image of a gigantic Christmas tree surrounded by presents.

But no matter how many times he tried to walk around the large sprawling single storey house, he always ended up at the front door.

Mrs. Claus's magic was almost as powerful as Santa's own.

The hard snow began to slope upward. Before they reached the rise, Kert veered left.

Heading for the stables and the Gift Packing and Staging Area.

Snow from Kert's boots puffed up, clouding Gil's eyes. Crisp air tingled in his nostrils. He still wore his work outfit, the thin white shirt, the light green smock over his dark green pants. All of it designed for easy movement and warm temperatures within a busy workshop.

Not for running around outside in the dead of winter.

But almost there. When they reached the staging area, Gil would call for his winter coat. Hopefully his magic was strong enough to bring it that distance.

Another kick of snow caught him in the face. Gil spit out the melting droplets, wiped his eyes. There in the shadows ahead of them the giant stone blocks of the side of the barn came into view. Chiseled perfectly straight, the white stone wall stretched above Gil's head probably ten times his height, and at four feet he was one of the tallest of the Elves.

The black roof curved away from him, blotting out the twinkling stars. No lights decorated the stables. The reindeer got too excited by the flashing colours. It was hard enough keeping them calm once December hit.

Kert skidded to a stop just past the stables. Beyond him, Gil could see the single side door of the Gift Packing and Staging Area. A small, single storey, wood building, two extra wide double doors butted up to the stables. Those double doors, painted red like a Christmas present, were closed now, like they always were after Santa departed.

"Are you sure it was a present for this year?" he said. "Maybe it was from some other year."

He led Gil into the main staging area.

Gil had never been inside here. He worked in the workshop and wasn't strong enough to help pack the sleigh.

The smooth wood floor gave a bit of bounce to his steps as he followed Kert. Smooth, grey paneled walls stretched high above his head, ending with great wooden supports crisscrossing the ceiling. The room was a huge, empty rectangle, stretching to a length of fifty feet to Gil's right. The interior of the closed red doors were just to his left. The width of the place was about twenty feet wide.

The air held a swirl of odours: the gamey smell of the reindeer, peppermint smell of candy canes, the heady odour of paper and tape, and finally the musky jolliness of Santa.

Torn bits of coloured paper and scraps of ribbon lay scattered on the floor. As Kert hurried across, bits rolled out of his way like tumbleweeds. Against the wall, Gil recognized the row of wooden carrier boxes resting on their steel blades.

He'd certainly packed enough toys into those carrier boxes, standing on tiptoes to do it. He'd never seen so many of them before. They stretched along the walls on both sides of the staging area, leaving the middle empty.

His voice carried through the empty space. Gil spotted him waving by the third carrier box.

He hurried to Kert's side. In the shadows behind the wooden box, he followed where Kert pointed.

And saw a flash of red in the dimness.

A small rectangle, smaller than a shoebox, decorated with red sparkly paper and tied with a white ribbon.

As Gil picked up the box he realized there was no way it could be from any other Christmas. The paper still had that fresh new crackle, the tape still had that brand new adhesive smell.

This was a present for this Christmas.

His voice ended in a shriek that echoed through the entire area.

All the Elves would be attending the feast, except for those manning the tracking station. Mrs. Claus always sent over the best parts of the meals to the three Elves who worked all night. It was such a prestigious post, Elves vied all year to be chosen to man the tracking station and keep Santa apprised of weather patterns and air flight schedules all night.

And one of their dorm mates was working there tonight.

Gil shoved the package under his vest and buttoned up. He grabbed Kert's hand.

"Come on, we'll check with Stufur at the tracking station."