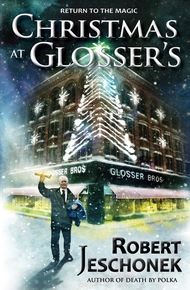 Pennsylvania in 1975. Shoppers fill the downtown streets, bustling between the Glosser Bros. and Penn Traffic department stores…and one little boy runs through the crowd on a mission. Eleven-year-old Jack wants one thing for Christmas: to find out where his grandfather, Bub, runs off to every Christmas Eve. The trail leads Jack on a journey through Glosser Bros. at its most magical, but the magic takes an unexpected turn when he discovers Bub's secret. Before the night is over, Jack must take a stand in the name of Johnstown, a stand that could cost him everything...or bring him the greatest gift he can imagine.

Award-winning author Robert Jeschonek writes unique and strange tales always full of heart. His mind just works differently and that makes his fiction memorable and wonderful. In the short novel Christmas at Glossers, a young boy in 1975 tries to figure out where his grandfather disappears to on Christmas Eve every year. It ends up being a memorable journey through Glosser Bros. Department Store where magic takes a very unexpected turn. Find more of Bob's work at robertjeschonek.com – Dean Wesley Smith

Snow flurries flickered down around Jack as he followed Bub out of Dale. The closer he got to downtown, the more flurries fell, and the colder the wind got.

The skies darkened, too, as afternoon spun toward evening. Plenty of the cars whisking past on Bedford Street had their headlights on, though the streetlights above remained dark.

The snow picked up, and so did Jack's curiosity. Where could Bub be heading on Christmas Eve, alone? Why was he going there?

Every year, he did the same thing, without explanation. Jack always ended up going to midnight mass at St. John's with his grandmother, Gram. As for Mom, she never came along, either, but her travels weren't so mysterious; there was always a new boyfriend in the picture, complete with drama or celebration or both.

Bub left the bigger gap, as far as Jack was concerned. He'd been Jack's father figure and best friend for the past seven years, for most of Jack's life. Not having Bub around cast a shadow on Christmas Eve; he was always back for Christmas Day, but it was never enough.

And every year, the mystery of his whereabouts haunted Jack a little more. It had become one of the overriding mysteries of his life, right up there with Why did my Dad leave when I was four years old and is he ever coming back?

Now, as Jack got closer to an answer, his heart beat faster. He was on the verge of discovery, he could feel it; nothing would be the same after that.

Bub ambled across Haynes Street and kept going, making a beeline into town. He glanced in the front window of the Bedford Street Newsstand, waved at someone inside, but didn't slow down.

When Jack reached the newsstand, he looked in and saw an old-timer looking back at him, scrawny and shriveled in a pale blue polyester leisure suit. The old man eyed him as he passed, giving a little half-nod before returning his attention to the magazine rack.

By the time Jack looked forward again, Bub was two blocks ahead, rounding the corner of Main Street. No question, he was making good time; for a man with a big pot belly, he could really move when he wanted to.

Imagining he was Colonel Steve Austin, the bionic hero from his favorite TV show, The Six Million Dollar Man, Jack broke into a full-tilt run. Arms and legs pumping, he blasted across Vine Street—getting honked at by a car about to make a left turn—and covered the remaining distance to Main in nothing flat.

Worried that he might have lost Bub, he eased around the corner for a look down Main...and felt a wave of relief. Bub had stopped a block away, across from the McDonald's restaurant, and was talking to an old woman dressed in red. Her hat, coat, dress, and shoes were all red; maybe she was going to a holiday function...but if so, where was the green to go with the red?

As Jack watched, Bub reached out and put a hand on her shoulder. Had this been his goal from the start? Meeting up with a secret girlfriend?

But then, with a few more words, he let go of her and continued on his way down Main Street. Meeting the woman wasn't his last stop after all.

Jack still thought there was something funny about her, though. As he walked past her on his way to follow Bub, he took a good look...and felt a shiver up his spine. Her eyes, when he gazed into them, were misaligned, each looking off to either side instead of straight ahead. Jack couldn't tell if she was looking right at him or not.

He was all too happy to get past her, especially as Bub was already turning another corner. He was a block ahead on the other side of Main, zipping right on Franklin Street.

Channeling the Six Million Dollar Man, Jack bolted after him. As he ran, he heard the sound effect from the TV show in his head, the sound like high-tech motors and parts cranking and straining in artificial legs: ch-ch-ch-ch-cha, ch-ch-ch-ch-cha.

The latest course change brought him to the heart of the action, the middle of town. Central Park, on the left, was filled with little cottages, each decorated with Christmas paraphernalia. The trees in the park were all decorated, too; just as Jack rounded the corner, every one of them lit up at once, hundreds of bulbs glowing blue, red, yellow, and green amid the falling flurries.

The park and the sidewalks around it were busy with people, most of them hurrying with arms full of shopping bags. The bags were all stamped with a familiar logo, a name printed with a flourish on the brown-and-white-striped paper. It showed where they'd been...and where Bub was now headed. Whether it would be his last destination remained to be seen, but Jack knew it was where he was going right now.

Glosser Bros. The big department store facing the park, on the corner of Franklin and Locust.