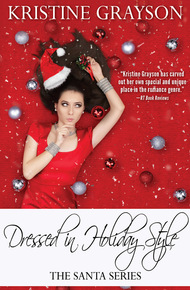 Raine Wilkins covers Life and Style stories for the Chicago Courier. When she runs into Niko North outside a gala event, she finds herself drawn to him in ways she can't explain. She trusts him—an enigmatic stranger!—but she doesn't quite know why, although his stunning good looks might play a role. And he seems to need her help.

Because Niko might inherit his family's business, Claus & Company. He thinks the business should help needy children all year round. He wants to make that change, but he doesn't know how.

Few know more about Greater World need than Raine. Can she help Niko fight decades of tradition for the greater good? And can they help each other believe that fairy tales really do exist?

USA Today bestselling writer, Kris's fun fantasy novels have been acclaimed in hundreds of major reviews. Booklist said "Grayson's clever, humor-tinged writing is absolutely delightful." And Kasey Michaels said, "Kristine Grayson gives 'happily ever after' her own unique twist. Dressed in Holiday Style shines a fun light on the aspect of giving during the Christmas season. You can find a lot more of her work at kristinegrayson.com – Dean Wesley Smith

RAINE WILKINS STOOD in the ankle-deep snow, staring over the hedge. The mansion's golden interior light spilled across the massive yard. All of the trees and shrubs beside the building were covered in silver fairy lights, with a touch of red and green, tastefully placed to hint at the season. A gigantic Christmas tree stood in the floor-to-ceiling bay window of the ballroom, but the other windows—also large—revealed couples waltzing as if they were extras in a Fred Astaire movie.

The women wore long dresses that flowed with their every movement, their hair short and styled or long and piled on top of their heads, held in place with tiaras and bows and jewelry that glittered. The men wore tuxes with tails that added to the sense of motion.

She could almost hear the music.

She wasn't bred for it, of course. She stood in the snow, her ancient boots starting to leak, her ratty (but warm) parka wrapped around her, her gloved hands tucked inside the sleeves, creating a makeshift muff. She had forgotten a hat, and she didn't want to put the hood up because it would block her vision. The parka was heavy-duty, the kind built for a good Midwestern winter, the kind they'd had when she was a kid, the kind the weather forecasters said they would have this year.

She shouldn't be here. She had told herself she would drive to the mansion in Lincoln Park just to see how long it took to get there from her ratty apartment on the Near West Side, knowing that tomorrow she would have to account for traffic as well.

But she had known, deep down, that she wanted to see the gala event of the season and imagine herself taking part, instead of standing on the sidelines, asking questions about the event—for, of all things, the Life and Style page (which her editor snidely called "the society page").

She hated Life and Style work. But, she reminded herself, unlike her colleagues from Northwestern, she had gotten a paying job as a reporter at the Chicago Courier, one of the few remaining big dailies in the nation, and she'd been promised that she could keep the job if she outperformed every other new hire from that summer.

Outperforming meant taking the humiliating work along with the good stories. Not that any good stories had come her way yet. She was too young and too new.

She was covering stupid stuff—high-end engagement parties, routine political speeches, and (her least favorite) the county fair. Often, she was doing background for one of the "real" reporters, or helping them post their articles on the paper's brand-new website.

She hadn't expected this. She had awards and credentials. She had written for major newspapers (with the prodding help of her professors), and she had interned at one of the most prestigious papers in the country—for no money, of course. She'd actually had to pay the university tuition for the privilege of interning, because the position provided "experience" and "enhanced her résumé" while infusing her with more cynicism than a woman of twenty-four should probably have.

She sighed. She wished, just once, she had some money and respect. She knew that the very rich people waltzing inside that mansion weren't the stuff of fairy tales, but she liked to imagine they were. The Rich—different from everyone else, if she were to believe F. Scott Fitzgerald. She liked to believe they not only had better clothes and more financial opportunities, but also perfect lives.

She'd never had a perfect life. She'd been so poor that she hadn't known where her next meal would come from. Not a lot of Northwestern freshman had homeless parents and full scholarships. She'd kept that secret, even from her best friends at school.

College had been a luxury for her, and her experiences growing up had enabled her to survive that disastrous internship without going either hungry or bankrupt.

She'd even freelanced. That had made her so much more money than her stupid job was earning her right now. Maybe she should give up the steady paycheck and strike out on her own....

The male voice from behind her made her jump. Her heart rate increased a thousandfold, but she tried to pretend she wasn't alarmed as she turned to see who spoke.

A tall, blond man stood behind her. He was about her age, with flawless skin—the type she would have killed for—just starting to pink up from the chill, a square jaw, and blue eyes so electric they seemed lit from within.

The white scarf wrapped around his neck appeared to be his only concession to the weather. He had his hands in the pockets of his tux trousers, but he didn't look cold.

She wondered if he was drunk.

"I feel like I should be offering you my parka," she said. "Isn't that the chivalrous thing to do?"

He shrugged one broad shoulder. "The chill feels good. It's stuffy inside."

"It'll feel good for a few minutes," she said. "And then you're going to regret you ever stepped out here."

"And regret that I joined you to spy on the Lifestyles of the Rich and Famous?" He didn't sound sarcastic, but in her mind, she could hear Robin Leach's smarmy voice blaring the words. She hadn't thought of that show since she was a kid. Even then, it had been a guilty pleasure.

Her cheeks heated. She'd been caught.

She decided not to lie. "It looks pretty in there."

"Oh," he said. "It is pretty, in a soulless, let's-make-this-the-most-stunning-room-in-the-world sort of way."

As if she knew what that was. She'd like to experience it, just once.

"You don't like it," she said, both as a question and a statement.

He shrugged again, his blue eyes looking past her. He was taller than she was. He could probably see inside so much better than she could.

"I've always liked that saying, 'Home is where the heart is,'" he said.

Something about the way he spoke the cliché caught her ear. She'd been concentrating so hard on not looking startled by him that she hadn't noticed, until now, that he had one of those indefinable European accents. An English-is-my-second-language-and-I-speak-it-better-than-you accent.

"You'd better go back inside before you freeze," she said.

He smiled faintly and looked at the windows. Their light reflected in his magnificent eyes.

He shrugged again. "I have a hunch," he said softly, "I'm about to run away."