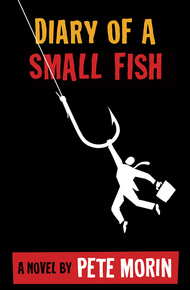 Pete Morin has been a trial attorney, a politician, a bureaucrat, a lobbyist, and a now, a novelist. He combines them all in his debut novel, Diary of a Small Fish. Pete’s short fiction has appeared in NEEDLE, A Magazine of Noir, Words With Jam, 100 Stories for Haiti, and Words to Music. He published many of them in a collection titled Uneasy Living, available on Amazon and Smashwords. When he is not writing crime fiction or legal mumbo jumbo, Pete plays blues guitar in Boston bars and plays an occasional round of golf. He lives in a money pit on the seacoast south of Boston, in an area once known as the Irish Riviera. Pete is represented by Christine Witthohn of Book Cents Literary Agency.

Diary of a Small Fish by Pete Morin

When Paul Forte is indicted by a federal grand jury, everyone suspects prosecutor Bernard (don’t call him “Bernie”) Kilroy has more on his mind than justice. Then the FBI agent in charge of Paul’s case gives him a clue to the mystery: Kilroy is bent on settling an old family score, and he’s not above breaking the law to do it.

Paul is already dealing with the death of his parents and divorce from a woman he still loves. Now, with the support of an alluring grand juror, Paul must expose the vindictive prosecutor’s own corruption before the jury renders a verdict on his Osso Buco.

I met Al in front of his office at 8:00 sharp, and we began a slow walk toward the FBI office at Center Plaza. It was an unusually mild December morning. We both wore trench coats, but mine was open. I don’t know if it was nerves or what, but I was sweating underneath.

“Not bad. Got two hours at least, but I did a lot of productive thinking.”

I almost pushed him into traffic. “No, Al.” I think it was the first time in his life he’d felt stupid. “What is this amendment thing all about?”

“I was going to ask you the same thing,” he said.

I stepped off the curb at Congress and Milk, and he grabbed my coat and yanked me back as an MBTA bus roared by.

“Beats me, Al. I mean, I have a hard and fast rule. I don’t conduct official business on behalf of golf partners. I have well-defined limits and I live within them.”

The pedestrian sign blinked “WALK,” and others did, but Al kept his hand on my arm as they funneled around us.

“Am I sure of what? That I did nothing for Pierce? That I have well-defined limits? That I live within them? Be precise, for crissakes.”

Al pursed his lips and led me into the crosswalk behind the crowd. “You know, Paul, the memory tends to do unpredictable things to someone charged with a crime. Despite my experience, I have yet to perfect the method of yanking the truth out of my own clients. It’s disconcerting how often I am surprised.”

“How considerate of you to think of me, Al. I don’t remember doing anything for Stuart Pierce or anyone else. I vote and debate according to my conscience and nothing else. Unless those are official acts, I have no idea what they’re talking about.”

“I’ll get the House Journal for the day in question, but I’ll need to get the actual amendment document they’re referring to. If you have some 'unofficial' means to get it faster, I’d encourage you to use it. I’ll ask for it through discovery anyway, but I prefer the belt and suspenders approach.”

“Sure thing, Al. Don’t want my pants falling down.”

We finished the walk to Three Center Plaza in silence and rode the elevator up to the sixth floor, where the door opened into a plain, cream-colored hallway with carpeting that should have been replaced long ago. Still not as bad as the grand jury room, though.

At the end of the hallway was a glass door with a big government seal with “Federal Bureau of Investigation” emblazoned on it. On the other side of the glass I could see a metal detector and another glass window with two female clerks sitting behind it. Al led me through the glass door into the small waiting room, and went to the window.

“Who is the case agent?” the lady behind the glass said through the voice box.

“I’ll turn you over to Mr. Hartfield and then you’ll see me when you get into the courtroom. Try to relax. This is routine for them, even if it isn’t for you. They’re all professionals here.” Easy for him to say. I felt a little better, except for the hissing in my ears and a slight weakness in my knees.

A door opened and a tall guy with sharp features, maybe forty, stepped out. He wore a white shirt and black tie with gray flannel dress pants.

Agent Hartfield introduced himself to Al, quickly mentioning that he was aware of Al’s prior service. They had a brief, cordial chat that mentioned several people they both seemed to know. Al introduced me, and the agent stuck out his hand. When I shook it, I noticed mine was cool and damp. Hartfield’s piercing blue eyes bore into me, like he was assessing my every mannerism, but he didn’t have the face of a malicious man. He was all business, for sure.

As Al prepared to leave, Hartfield said, “You might want to give Mr. Croston your coat. You won’t need it. He can give it to you in the courtroom.”

I looked at Al and he nodded. I removed my trench coat and Al slung it over his arm and said goodbye.

Hartfield escorted me through the door into a maze of hallways to a stark white-walled room where he searched, fingerprinted and photographed me and catalogued my personal belongings — a driver’s license. He led me out of the white room, down another maze of hallways into an open office area filled with cubicles. It wasn’t shabby, but it wasn’t government chic either. Spartan, clean.

At the end of a row, he directed me into the corner cubicle and pointed to an empty chair. He sat behind his desk, pulled his keyboard forward and peered at the computer screen. I took a quick look around the cubicle. A couple of family pictures. Summer at the Cape, maybe. Some official-looking shoulder patches tacked on a cork board. And a picture of Hartfield and three other guys in golf attire, standing on a tee someplace. I took solace in that.

“You’re the guy who’s been investigating me for perjury, I’m guessing.”

“Yes I am, sir. I am the case agent.” Maybe it was just that my senses were out of whack, but he sounded almost apologetic about it.

Well, what the hell, I wasn’t going to take it personally. The man was just doing his job. “Did you draw the long straw or the short one?”

Hartfield winced and smiled. “I try not to compare them, but...”

He didn’t finish, but I had nothing to say, so I kept quiet, see if maybe he’d go on and say something. And he did.

“Well, then, Agent Hartfield, let’s do the business we gotta do and I won’t hold it against you.”

I’m in federal custody, there are probably a hundred weapons within fifty feet of me, and I’m telling him that. And he must have appreciated it, or thought I was a damn fool, because he chuckled. Then he got down to his business, asking me a series of questions, all the usual personal information, was I married, have kids, where did I work.

When I confirmed that I was general counsel of the T, he glanced up from the computer screen.

“For the time being anyway. You know the man?”

He looked back at the screen. “Yah, we know him.”

We know him. He continued with the questions.

Again he looked up. “Parents?”

“My sympathies. You’re too young to lose both of them.”

Hartfield halted his typing again and turned to face me directly.

“Your father was Charles Forté? The lawyer?”

“No, I never had the pleasure. But my father did.”

He sat back in his swivel chair with his hands resting on his thighs. “My father was a lawyer at the SEC. Head of enforcement. He spoke very highly of your father.”

“Small world.” He nodded as he went back to his keyboard.

Hartfield finished with the questions — names, addresses and telephone numbers of all living direct friends and business associates. Did I have any alcohol or chemical dependencies? Did I have any friends or relatives living outside the United States?

While Hartfield typed, I looked at the photo of him and his pals on the golf course.

“That picture at Doral?”

He glanced over at the picture without his fingers pausing.

I looked closer at the picture. I could see the clubhouse in the background.

Agent Hartfield stopped typing and looked at me. “Yeah, you played it?”

He actually smiled at me, this federal agent.

“Hey, Agent Hartfield. I have a right to remain silent.”

He chuckled. “No crime in asking.”

“You of all people oughtta know the answer to your own question.” Another chuckle. The guy had a sense of humor, anyway.

He stared at his screen and tapped. “Mr. Hartfield, you mind if I ask you a question?”

“Can’t promise I’ll answer it, but sure, go ahead.”

“What the hell is this business with an amendment?”

He sat still for a moment, like he was thinking maybe he might answer. “Sorry, Mr. Forté, I am not at liberty to speak with you about details of the case. But I’m sure your lawyer will be able to obtain that information in due course.”

“Figures. No harm in asking.”

He went back to tapping, finally finished his report, and while the printer whirred, he seemed to consider something for a moment, then spoke.

“My father,” he said. “He didn’t talk about his work. Once in a while, he’d tell me a story or two about your father.”

What did I say to Agent Hartfield? “He was a good guy.” I’d been hearing stuff like this my whole life. “I wonder what he’d think of my predicament.”

“I don’t doubt that you do. I’m betting he’d think it was a bunch of bullshit.”

I heard a hammer drop. “Why do you say that?”

Hartfield stared at the Doral picture, then over to his family. “Mr. Forté, there are times when a man says to himself ‘this is not what I signed up for.’”

“I guess we all have a job to do. But I appreciate your frankness, and mum’s the word. Is your father still with us?”

“He’s in a nursing home in Newton. He’ll get a kick out of hearing about this.” He stood. “Time to go.”