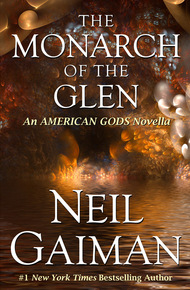 Neil Gaiman’s most recent novel, #1 New York Times Bestseller THE OCEAN AT THE END OF THE LANE was named Best Novel of the Year, and he has also won the Newbery Award for THE GRAVEYARD BOOK. He has written many other novels (among them AMERICAN GODS, CORALINE), comics (the Sandman series), short stories and poems. He has written episodes of “DR Who” and appeared as a cartoon version of himself on “Arthur” and “The Simpsons.” He has close to 2 million followers on Twitter, but must occasionally take vacations from social media in order to keep writing books. Born in England, he lives in America with his wife, Amanda Palmer.

The Monarch of the Glen by Neil Gaiman

How can I not have a soft spot for Neil Gaiman? Fans know him as a god among writers, one of the most successful authors working today. For me, though, I got to know Neil when his young son (now a successful doctor!) was a big fan of our Star Wars Young Jedi Knights series. OK, Neil, we’ll let you in the StoryBundle… – Kevin J. Anderson

"If you ask me," said the little man to Shadow, "you're something of a monster. Am I right?" They were the only two people, apart from the barmaid, in the bar of a hotel in a town on the north coast of Scotland. Shadow had been sitting there on his own, drinking a lager, when the man came over and sat at his table. It was late summer, and it seemed to Shadow that everything was cold, and small, and damp. He had a small book of Pleasant Local Walks in front of him, and was studying the walk he planned to do tomorrow, along the coast, toward Cape Wrath.

He closed the book.

The little man cocked his head to one side, and he winked, theatrically. He had steel-gray hair, and a gray face, and a gray coat, and he looked like a small-town lawyer. "Well, perhaps that is what I mean, at that," he said. Shadow had had problems understanding Scottish accents in his short time in the country, all rich burrs and strange words and trills, but he had no trouble understanding this man. Everything the little man said was small and crisp, each word so perfectly enunciated that it made Shadow feel like he himself was talking with a mouthful of oatmeal.

The little man sipped his drink and said, "So you're American. Oversexed, overpaid, and over here. Eh? D'you work on the rigs?"

"An oilman? Out on the big metal platforms. We get oil people up here, from time to time."

The little man took out a pipe from his pocket, and a small penknife, and began to remove the dottle from the bowl. Then he tapped it out into the ashtray. "They have oil in Texas, you know," he said, after a while, as if he were confiding a great secret. "That's in America."

He thought about saying something about Texans believing that Texas was actually in Texas, but he suspected that he'd have to start explaining what he meant, so he said nothing.

Shadow had been away from America for the better part of two years. He had been away when the towers fell. He told himself sometimes that he did not care if he ever went back, and sometimes he almost came close to believing himself. He had reached the Scottish mainland two days ago, landed in Thurso on the ferry from the Orkneys, and had traveled to the town he was staying in by bus.

The little man was talking. "So there's a Texas oilman, down in Aberdeen, he's talking to an old fellow he meets in a pub, much like you and me meeting actually, and they get talking, and the Texan, he says, Back in Texas I get up in the morning, I get into my car—I won't try to do the accent, if you don't mind—I'll turn the key in the ignition, and put my foot down on the accelerator, what you call the, the—"

"Right. Put my foot down on the gas pedal at breakfast, and by lunchtime I still won't have reached the edge of my property. And the canny old Scot, he just nods and says, Aye, well, I used to have a car like that myself."

"What are you drinking? Lager? Same again over here, Jennie love. Mine's a Lagavulin." The little man tamped tobacco from a pouch into his pipe. "Did you know that Scotland's bigger than America?"

There had been no one in the hotel bar when Shadow came downstairs that evening. Just the thin barmaid, reading a newspaper, and smoking her cigarette. He'd come down to sit by the open fire, as his bedroom was cold, and the metal radiators on the bedroom wall were colder than the room. He hadn't expected company.

"No," said Shadow, always willing to play straight man. "I didn't. How'd you reckon that?"

"It's all fractal," said the little man. "The smaller you look, the more things unpack. It could take you as long to drive across America as it would to drive across Scotland, if you did it the right way. It's like, you look on a map, and the coastlines are solid lines. But when you walk them, they're all over the place. I saw a whole program on it on the telly the other night. Great stuff."

The little man's pipe lighter flamed, and he sucked and puffed and sucked and puffed until he was satisfied that the pipe was burning well, then he put the lighter, the pouch, and the penknife back into his coat pocket.

"Anyway, anyway," said the little man. "I believe you're planning on staying here through the weekend."

"No, no. Truth to tell, I was standing in the hall, when you arrived. I heard you talking to Gordon on the reception desk."

Jennie the barmaid put their drinks onto the bar. "Five pounds twenty," she said. She picked up her newspaper, and started to read once more. The little man went to the bar, paid, and brought back the drinks.

"So how long are you in Scotland?" asked the little man.

Shadow shrugged. "I wanted to see what it was like. Take some walks. See the sights. Maybe a week. Maybe a month."

Jennie put down her newspaper. "It's the arse end of nowhere up here," she said, cheerfully. "You should go somewhere interesting."

"That's where you're wrong," said the little man. "It's only the arse end of nowhere if you look at it wrong. See that map, laddie?" He pointed to a fly-specked map of Northern Scotland on the opposite wall of the bar. "You know what's wrong with it?"

"It's upside down!" the man said, triumphantly. "North's at the top. It's saying to the world that this is where things stop. Go no further. The world ends here. But you see, that's not how it was. This wasn't the north of Scotland. This was the southernmost tip of the Viking world. You know what the second most northern county in Scotland is called?"

Shadow glanced at the map, but it was too far away to read. He shook his head. "Sutherland!" said the little man. He showed his teeth. "The South Land. Not to anyone else in the world it wasn't, but it was to the Vikings."

Jennie the barmaid walked over to them. "I won't be gone long," she said. "Call the front desk if you need anything before I get back." She put a log on the fire, then she went out into the hall.

"Are you a historian?" Shadow asked.

"Good one," said the little man. "You may be a monster, but you're funny. I'll give you that."

"Aye, that's what monsters always say," said the little man. "I was a specialist once. In Saint Andrews. Now I'm in general practice. Well, I was. I'm semiretired. Go in to the surgery a couple of days a week, just to keep my hand in."

"Why do you say I'm a monster?" asked Shadow.

"Because," said the little man, lifting his whiskey glass with the air of one making an irrefutable point, "I am something of a monster myself. Like calls to like. We are all monsters, are we not? Glorious monsters, shambling through the swamps of unreason . . ." He sipped his whiskey, then said, "Tell me, a big man like you, have you ever been a bouncer? ‘Sorry mate, I'm afraid you can't come in here tonight, private function going on, sling your hook and get on out of it,' all that?"

"Yes," said Shadow, who had been a bodyguard once, to an old god; but that was in another country.

"You, uh, you'll pardon me for asking, don't take this the wrong way, but do you need money?"

"Everyone needs money. But I'm okay." This was not entirely true; but it was a truth that, when Shadow needed money, the world seemed to go out of its way to provide it.

"Would you like to make a wee bit of spending money? Being a bouncer? It's a piece of piss. Money for old rope."

"Not exactly. A private party. They rent a big old house near here, come in from all over at the end of the summer. So last year, everybody's having a grand old time, champagne out of doors, all that, and there was some trouble. A bad lot. Out to ruin everybody's weekend."

"Was it political?" asked Shadow. He did not want to be drawn into local politics.

"Not a bit of it. Yobs and hairies and idiots. Anyway. They probably won't come back this year. Probably off in the wilds of nowhere demonstrating against international capitalism. But just to be on the safe side, the folk up at the house've asked me to look out for someone who could do a spot of intimidating. You're a big lad, and that's what they want."

"How much?" asked Shadow.

"Can you handle yourself in a fight, if it came down to it?" asked the man.

Shadow didn't say anything. The little man looked Shadow up and down, and then he grinned again, showing tobacco-stained teeth.

"Fifteen hundred pounds, for a long weekend's work. That's good money. And it's cash. Nothing you'd ever need to report to the tax man."

"Starting Friday morning. It's a big old house. Part of it used to be a castle. West of Cape Wrath."

"If you do it," said the little gray man, "you'll get a fantastic weekend in a historical house, and I can guarantee you'll get to meet with all kinds of interesting people. Perfect holiday job. I just wish I was younger. And, uh, a great deal taller, actually."

Shadow said, "Okay," and as soon as he said it, wondered if he would regret it.

"Good man. I'll get you more details as to when." The little gray man stood up, and gave Shadow's shoulder a gentle pat as he walked past. Then he went out, leaving Shadow in the bar on his own.