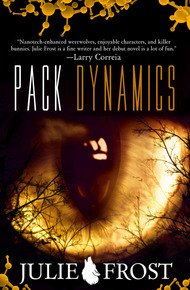 Julie Frost lives in Utah with her family, which consists of more pets than people, along with a collection of anteaters and Oaxacan carvings, some of which intersect. She writes an eclectic mixture of science fiction and fantasy, which has appeared in Cosmos, Unlikely Story, Plasma Frequency, Stupefying Stories, and many other venues, and has been a Finalist at Writers of the Future and the Hidden Prize for Prose. This is her first novel. She whines about writing, a lot, at agilebrit.livejournal.com, or you can follow her on Twitter @JulieCFrost.

Werewolves! Vampires! Mad science! Industrial espionage! What could possibly go wrong with this case? Well …everything.

"I've always hated books about werewolves—until I read Julie Frost. There's a warmth, a viciousness, a wisdom, and a sense of humor that somehow combine into something joyous and unique. Highly recommended!"

It's not often you meet someone who knows a lot about werewolves and PTSD. I met Julie Frost at a Salt Lake City Comic Con, after she had published several well-received short stories in her Pack Dynamics universe. Besides, Larry Correia had taken her under his wing as her mentor, and you risk a lot if you go up against Larry Correia. WordFire accepted her novel and we debuted it at the next SLC Comic Con, where Julie signed her just-released book next to Larry Correia, Terry Brooks, RA Salvatore, Chuck Gannon, Tracy Hickman, David Farland, and Jim Butcher. Not a bad experience for your first signing! (She sold out of all her books, by the way; I don't think any of the others did.) – Kevin J. Anderson