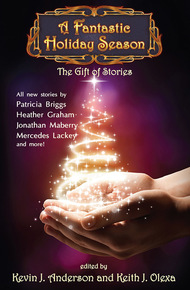 Kevin J. Anderson has published over 125 books, more than fifty of which have been national or international bestsellers. He has written numerous novels in the Star Wars, X-Files, and Dune universes, as well as a unique steampunk fantasy novel, Clockwork Angels, based on the concept album by legendary rock group Rush. His original works include the Saga of Seven Suns series, the Terra Incognita fantasy trilogy, the Saga of Shadows trilogy, and his humorous horror series featuring Dan Shamble, Zombie PI.

Keith Olexa began chasing fantasy, science fiction and horror stories as Managing Editor to STARLOG magazine, and contributing editor to FANGORIA magazine, and he’s been professionally immersed in these genres ever since. Keith became Head Editor for Phobos Books in 2000, helping launch the Phobos writing contest and Science Fiction Anthology (w/Orson Scott Card), before turning to freelance writing and editing. He’s interviewed many genre luminaries and celebrities in the past, including actors Vin Diesel, Dakota Fanning, Rosamund Pike and Kurt Russell, directors Shane Carruth and Hayao Miyazaki, and authors Tracy Hickman, David Eddings, Vernor Vinge, T.A. Barron and Greg Keyes. Keith is currently editing and proofing for Kevin J. Anderson’s WordFire Press, when not developing his own fictional worlds, or helping refine the worlds of others.

But what better pleasure is there than a good holiday story? So open this winter solstice sampler and indulge in funny festive fantasies, nightmares before Christmas, and stunning space-age celebrations … these stories will warms hearts and minds like a blazing Yule log.

I should need no introduction for how I met Kevin J. Anderson, since I've known him since birth! I chose to include the first of my Dan Shamble, Zombie P.I. books in this bundle because it's such a delightful series for me to write and I want you to get hooked on it. The newest novel, TASTES LIKE CHICKEN, was just released a few days ago. And, because it's the holiday season, I am also including an anthology I edited with Keith Olexa, A FANTASTIC HOLIDAY SEASON, which has a range of stories set during the holiday season, from zombies at Thanksgiving to aliens at Christmas. – Kevin J. Anderson

Santa Claus was an unnatural. That made perfect sense—I just hadn't thought of it before.

The jolly bearded guy in the bright-red suit came into the offices of Chambeaux & Deyer Investigations, desperate to hire my services. It's not often, I suppose, that Santa requires a detective—particularly a zombie detective.

I extended my gray hand … to shake his black-gloved one. "At your service."

I assessed my client-to-be. Santa carried a voluminous cloth sack over his left shoulder; it was limp and empty at the moment, rather than bulging with brightly wrapped gifts. His bloodshot eyes were as red as his suit. His cheeks were pale, and his face seemed less plump than the pictures I had seen on a million Christmas cards.

"It's a crisis." He looked around with haunted eyes. "I've been robbed!"

In the Unnatural Quarter, we see all sorts of clients. After the cosmic supernatural event called the Big Uneasy, all manner of legendary creatures had reappeared: ghosts, vampires, zombies, werewolves, ghouls, and other creatures that go bump, growl, or thud in the night. Why not Santa, too? Somebody who can slip down billions of chimneys in a night—without incurring a single home-invasion charge—would fit right in.

"We'll do everything we can to help, Mr. Claus," said Robin Deyer, my earnest lawyer partner, as she came out to greet the new client. "Is this more of a legal matter or an investigative one?"

"Oh-ho-ho, I definitely need a detective, and I came here because Mrs. Claus and I have heard about Mr. Chambeaux."

I was surprised. "We don't even advertise up at the North Pole. How did you find out about Chambeaux and Deyer Investigations?"

"Actually, we're local. My powers only manifest during the holiday season—it's not a full-time gig up in the cold. The rest of the year Mrs. Claus and I run a nice little bed-and-breakfast in the Quarter. Everybody around town knows the zombie detective to call when they're in a bind."

When I first moved into the Unnatural Quarter, I was a regular human P.I., trying to make a living like anybody else. I catered to clients who, though they sometimes looked like monsters on the outside, still had very human problems. Even after I got myself killed on a case, I climbed out of the grave and got back to work, still with Robin as my partner. Most unnatural aren't even bothered by the bullet hole in the middle of my forehead, and I've stopped being self-conscious about applying morticians' putty to cover it up.

Sheyenne, our office assistant, flitted up to Santa, beaming her gorgeous smile. "May I take your coat, Mr. Claus?"

Not only is Sheyenne extremely smart, competent, and efficient, she's beautiful on all counts. She's also my girlfriend. On top of that, she happens to be a ghost, murdered in the same case that saw me dead. But even through all that, we stuck together. It's a testament to the strength of our relationship.

Santa decided against removing his red coat. "No-ho-ho! It's part of my traditional image. The coat is made of magical material that keeps me comfortable no matter the temperature. That way I never have to take it off until the season's over. Traditions are important, and never more so than around the holidays."

Sheyenne leaned closer and whispered, "For the record, I never stopped believing in you."

He regarded Sheyenne with both wonder and mirth. "Strangely enough, I didn't believe in ghosts—until a few years ago." Santa sneezed, then turned back to me. "Mr. Chambeaux, I'm not going to kid you. There's more riding on this particular Christmas than ever before, and I'm coming apart at the seams. I need you to find my stolen property before Christmas Eve, or there'll be no joy to the world, no ho-ho-ho, no holly jolly, no Feliz in the Navidad, no Frohe in the Weihnachten, no Merry in the Christmas. You see how serious this is?"

"I think I do." I really had no idea, but I didn't want to look dumb in front of Santa Claus. "What exactly was stolen?"

"My list!" He was distraught—which was not at all the sort of attitude I expected from a man famous for his rumbling belly-laugh and infectious good cheer. "My list of who's Naughty and Nice! Without that list, I won't know which houses to visit, which Johnny deserves a model train set and which one gets a lump of coal, which Susie deserves a doll and which one gets a boring sweater. If I can't figure that out, Christmas definitely won't be the most wonderful time of the year."

"Don't you keep a photocopy?" Robin asked. "Or an on-line backup?"

Santa was horrified. "And break Christmas tradition? Millions of children believe in me and the way I do things, just so. They have dreams about Christmas, and it's my responsibility to safeguard those dreams." He shook his head again. "If I modernized, there'd be an uproar—not to mention countless bugs in the system—and then you can bet the Easter Bunny would hack into my database and start grabbing my market share. No, everything's done by hand on a very long roll of parchment, the names of every single boy and girl written with a goose quill."

That must have been the world's largest two-column spreadsheet. "And how exactly was it stolen?"

"Someone broke into the offices of my North Pole headquarters. It's our busy season, all of my helpers doing double shifts, decking the halls, dashing through the snow. Our packaging department is a madhouse, full of complete sets of lords a-leaping, partridges, pear trees—and everybody wants five golden rings. We still have an overstock of last year's fruitcakes, and I don't know what to do with the figgy puddings. I was sure there'd be a demand for those again." He wiped a gloved hand across his forehead.

"It's very hectic. I was taking a break with Mrs. Claus. She had made a fresh batch of eggnog, and this time of year she spikes it rather heavily. I slept like a baby … and when I went back to the office the list was gone!" He tugged on his beard. "It had to be an inside job." He paced back and forth, scuffing his black boots on our all-weather carpet. "I checked with all the line supervisor elves and every single one of the toy builders. This time of year they work around the clock without even restroom or cigarette breaks. But everyone had an alibi."

"Could you have been targeted by Homeland Security?" Robin asked. "Or some other law-enforcement organization monitoring your research as to who might be on a Most Naughty list?"

"I can see why they might want that," I said.

"Not at all, I have a close cooperative relationship with government agencies, considering all that airspace I fly over—and my work has to be done in a single night, so I have no time to mess with clearances. I even let NORAD track me every year. No, that list is in the hands of someone who means no good, mark my words … and no human could have gotten through my security. It had to be an unnatural."

He hung his head and seemed so sad that I wanted to sit on Santa's lap and give him a hug. He continued, "That's why I came to you, Mr. Chambeaux. If I don't get that Naughty and Nice list in time, I can't stop thinking about all those poor children who'll be disappointed, all those broken dreams, all those undelivered presents. It'll destroy their faith in Christmas … and they just might turn out to be naughty next year."

I was determined to solve the problem. It's not every day you get a chance to save Christmas—and not just because Christmas only comes once a year. "Don't underestimate how relentless a zombie can be, Santa. I'll find your list. If I have any questions or developments, how will I get hold of you? Do you have a business card?"

"Much better than that." Santa reached into a pocket of his red jacket and pulled out a bright green ribbon with a jingle bell attached. "Just ring this, and I'll be there. Even if I'm otherwise occupied, I have an answering service that can get hold of me."

The pink had come back to his cheeks, and a droll smile lifted his lips. "Oh-ho-ho, if you solve this case, there'll be something very special under the tree—for all of you."

Relieved and encouraged, Santa slung his empty sack over one shoulder and prepared to go. He closed his eyes and touched a finger to the side of his nose.

When nothing happened, he looked around our offices. Finding no chimney, he chuckled. "Sorry, I've been so worried about Christmas being ruined, I forgot how I arrived!" He left through the front door instead.