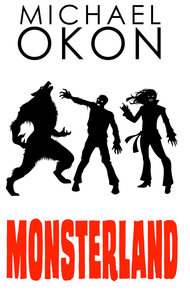 Michael Okon is an award-winning and best-selling author of multiple genres including paranormal, thriller, horror, action/adventure and self-help. He graduated from Long Island University with a degree in English, and then later received his MBA in business and finance. Coming from a family of writers, he has storytelling in his DNA. Michael has been writing from as far back as he can remember, his inspiration being his love for films and their impact on his life. From the time he saw The Goonies, he was hooked on the idea of entertaining people through unforgettable characters.

Michael is a lifelong movie buff, a music playlist aficionado, and a sucker for self-help books. He lives on the North Shore of Long Island with his wife and children.

Wyatt Baldwin's senior year is not going well. His parents divorce, then his dad mysteriously dies. He's not exactly comfortable with his new stepfather, Carter White, either. An ongoing debate with his best friends Melvin and Howard Drucker over which monster is superior has gotten stale. He'd much rather spend his days with beautiful and popular Jade. However, she's dating the brash high-school quarterback Nolan, and Wyatt thinks he doesn't stand a chance.

But everything changes when Wyatt and his friends are invited to attend the grand opening of Monsterland, a groundbreaking theme park where guests can interact with vampires in Vampire Village, be chased by werewolves on the River Run, and walk among the dead in Zombieville.

With real werewolves, vampires and zombies as the main attractions, what could possibly go wrong?

Sometimes you just have to take a guy under your wing. When we received Monsterland from Michael Okon, it was rough and needed some editing work, but the idea was really cool, sort of a Goonies meets Jurassic Park with monsters. I decided to edit it myself, and I got to know Michael rather well as we went back and forth over splitting infinitives and improper hominems (how can you not bond over that?) He has been an extremely ambitious promoter of MONSTERLAND, and I definitely wanted to give him a spot in this bundle. – Kevin J. Anderson

The fire Billy created burned bright; rabbits roasted on a spit made from hickory, the juices dripping to hiss in the flames. Seven of his hairy friends lay in scattered repose, enjoying the late afternoon lull—two napped, the others tossed a stuffed fur in the form of a ball around the clearing, hooting with amusement when it rolled into the brush. They traveled in a pack, his group, his makeshift family, foraging together, hiding in plain sight. It had been that way for generations. But the glades were getting smaller, the humans invasive.

Mosquitoes droned lazily over the still water. Frogs croaked while they sunbathed on waxy lily pads. The sun started its slow descent to the horizon, hot pink and lilac clouds rippling against the empty canvas of the sky. Here and there, fireflies lit the gloom, doing a placid ballet in the humid air.

Unseen, the men moved closer to the campfire as the sun sank into the western treetops.

A lone hawk cried out a warning, disturbing the peace of the glade. Huge birds answered, flapping their wings, creating a cacophony of swamp sounds. The area became a concerto of animals responding to the disruption of their home—wild screams, squeaks, and complaints of the invasion of their territory.

Billy stood, his head tilted as he listened intently. He heard a melody, that strange organization of sounds, predictable as well as dangerous. It had been years since he'd heard music. His stomach clenched with uneasiness. Where those rhythms originated meant only one thing—they were not alone in the swamp.

His pack rose, tense and alert, their eyes watching the waterway. Billy silently parted the thick leaves to expose a flat-bottom boat with dangerous strangers floating slowly toward them.

The boat was filled with people, excitedly searching the banks of the swamp, their expensive khaki bush clothes ringed with sweat.

Billy noticed the rifles before the rest of the group. He held up his hand signaling for silence. "Not tourists. Enemies," he replied.

This is no good, Billy thought furiously. He was gauging the time, his eyes opening wide. It was late. They had to get out of there. It's going to happen, and those people are going to see it.

The bald top of the moon peeked over the line of trees in the south, the sky graying to twilight with each passing second. Night came fast in the swamp, dropping a curtain of darkness, extinguishing all light except for the beacon of the full moon. It continued to float upward, indifferent to the consequences for its innocent victims.

A halo of lighter blue surrounded the globe, limning the trees silver, the cobwebs in the branches becoming chains of dripping diamonds in the coming night.

What do these strangers want? Billy fought the urge to scream. This is our home. Humans don't belong in the swamp.

The moon continued to rise, the familiar agony beginning in his chest. A full moon, a dangerous moon. Billy fought the demons churning within his body, feeling the pain of metamorphosis.

He curled inward, hunching his shoulders, the curse of his nature making his spine pull until his tendons and muscles tore from their human positions to transform into something wicked.

A howl erupted from his throat, followed by another, and then another. Grabbing handfuls of dirt, he tried to fight the awful change, but, as the sun set, the moon took control of his life, and the unnatural force tore through his unwilling body.

Reason fled, his heart raced. Falling on his hands and knees, Billy let loose a keening cry as his face elongated, his body changing into a canine, fangs filling his mouth. He raced in a circle in a demented dance, knowing his fellow pack members did the same thing.

Slowing, he regulated his labored breathing, forcing the icy calmness he needed to keep some semblance of reason. He peered through the dense brush. Lights from the search party bobbed in between the thick reeds. The odor, the stench of humanity, filled the clearing. The enemy had arrived.

He turned, digging furiously on the ground, throwing dirt on the campfire flames, hiding their existence. Discovery would ruin everything. No one could live with their kind.

"They've found us," he growled in the unique language they used after transformation. "Run!" he barked as he turned to his pack, watching his friends' naked skin transform until it was covered with the same silvered fur.

They cried out in unison at the pain, howling with the injustice, and then ran in fear from the interlopers threatening their habitat.

They separated into two groups and took off in different directions to confuse the strangers.

Billy tore through the brush, thorns ripping his fur, and, in his adrenaline rush, he didn't feel anything. He glanced backward; the humans were chasing them, one running with a huge camera. Nine other hunters followed, the long barrels of their rifles bearing down onthem.

Behind him, he heard multiple shots and triumphant shouts, knowing that his friends were succumbing one byone.

With a frantic growl, he urged Little John, Petey, and Todd to run faster.

Little John's massive body was blocking him. Billy bayed at him to keep his head closer to the ground. He worried about Little John, knowing that his big frame might as well have had a target painted on it.

"Stay close together," he urged. His heart sank when he heard Todd yelp. The shot hit his friend from behind, sending him careening into a trench. Billy wanted to stop but knew he couldn't help Todd. The humans were on his friend's fallen body seconds later. He had to find Petey and Little John a place to hide.

There was a loud scream as one of their pursuers stumbled on a root to their left. Billy paused, panting wildly, to get his bearings next to the broad trunk of a cypress tree.

Billy's eyes searched the tangle of the mangroves for an opening.

A shot rang out, splintering a tree, sending shards of bark around them. Billy reared in surprised shock. It wasn't a bullet. A red feathered dart was vibrating next to him, sticking out of the wood.

"What is that?" Petey whimpered.

He and his packmates took off, disappearing into the twisted vines.

They clawed through the swamp, hiding behind clusters of Spanish moss, dipping under the water when the hunters approached.

One man in the group stood taller and leaner than the rest, his dark wolfish eyes scanning the dense undergrowth looking for them. The man paused, training his gun in Billy's direction as if he could see straight through the foliage.

Billy held his breath, terrified of discovery, but the harried sounds of a chase distracted the leader of thehunters.

Billy and his pack skirted solid ground, their bodies quivering. He glanced at the sky, wishing for the sun to rise so that he would transform back to being human.

The splashes of their pursuers seemed to recede. The pack waited in claustrophobic silence for the time to pass.

Billy spied a dinghy heading towards the flat-bottom boat as dawn approached. They heard the sputter of an engine being turned over.

The rays of the sun lit the eastern sky. It was quiet once more. They paddled softly toward the shore. Coming out of the water, they shook themselves of the muck. Early morning birdcalls broke out in the thickstillness.

Billy barked a cry of dismay as shots rang out. Little John went down in a tumble of leaves and mud, a dart silencing him.

Billy veered right, squirming under a broken log, Petey barreling over it. The report of another shot and a loud thump told him that he had lost Petey too.

What do they want from us?

Billy dug his paws into the marshy land, his heart pumping like a piston. He leaped high over an alligator dozing in the shade of a leafy tree. Billy felt the impact of a dart, a sharp pain ripping into his flank.

His eyes dimmed as he tumbled headlong onto the boggy ground. He rolled over and over, coming to rest on a bed of rotting leaves. He couldn't move; his limbs were leaden. His ears registered the sound of running feet.

Billy looked up into the triumphant, black eyes of the man who led the attack. The hunter placed his boot on his neck, holding him down.

"Got ya," he heard the man say with a thick accent before everything went dark.