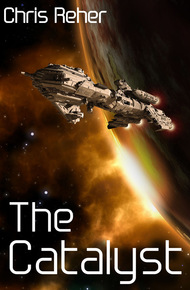 It's no easy tour of duty for Lt. Nova Whiteside when her interstellar transport is taken by pirates and she is then tagged for termination. Could it have something to do with the mysterious alien they were transporting? Having gone from merely MIA to technically AWOL, any chance of escape leaves her no choice but to rely on Sethran Kada, a former lover, for help.

Unfortunately, she realizes that they are now on opposite sides of an escalating war between the Commonwealth Union of Planets and an increasingly dangerous rebel organization.

In trying to find who is threatening her life, they discover a plot to destroy a distant planet - a world inhabited by creatures that are the key to Nova's survival - and a conspiracy that threatens the stability of the Union Commonwealth.

In a good space opera, there are certain things you look for. Fascinating Interstellar civilizations, thrilling adventures in deep space, long odds, worlds at war, and bad ass soldiers. Chris Reher wraps them all brilliantly into a story that's satisfying on its own, but even better as the start of the Targon Tales series. – Joseph R. Lallo

Nova stumbled out of the cockpit into the main cabin, a cluttered combination of living and work space, lined with storage bins and what appeared to be laundry. She tossed her respirator aside and slumped into a scuffed bucket chair. The dizziness had subsided but the happenings of the past hour had taken their toll. An annoying scrape in her throat demanded attention as much as the wound on her neck.

Seth followed and perched on the edge of a broad lounger beside her chair. "What a ride, huh? Does your neck hurt? It's still bleeding."

She leaned toward him and pulled his gun from its holster. She regarded it thoughtfully and then pointed it at him. The safety went off audibly enough. His eyes widened.

"I will give you about five minutes to explain why you attacked our ship and killed six Union officers along with over forty civilians and the crew. Not to mention how you knew about the tank and its contents. Then you are going to set course for Targon or I will kill you now and go there by myself."

Seth swallowed hard. Nova's accusation had been delivered with all the emotional involvement of a weather report. The barrel of the gun was aimed levelly at this head. He knew well that she was not only authorized but also quite capable of using it to kill even him.