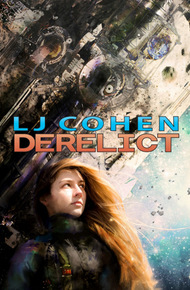 LJ Cohen is a Boston area novelist, poet, blogger, ceramics artist, geek, and relentless optimist. After almost twenty-five years as a physical therapist specializing in chronic pain management, LJ now uses her anatomical knowledge and myriad clinical skills to injure characters in her science fiction and fantasy novels. When not bringing home strays (canine and human), LJ can be found writing, which looks a lot like daydreaming.

LJ is active in IPNE (The Independent Publishers of New England), SFWA (The Science Fiction and Fantasy Writers of America), and Broad Universe and blogs about publishing, general geekery, and other ephemera at http://www.ljcbluemuse.blogspot.com.

A Star in the Void (book 5 of the SF/Space Opera series Halcyone Space) will be published Summer 2018. For more about LJ and her books, visit http://www.ljcohen.net or https://www.amazon.com/LJ-Cohen/e/B006QL6GA0

When Rosalen Maldonado tinkers with the derelict freighter, she's just hoping to prove she deserves a scholarship to University. She certainly doesn't count on waking the ship's damaged AI or having three stowaways, Micah Rotherwood and brothers Jem and Barre Durbin, along for the ride. They all have their private reasons for hiding aboard and lives they are seeking to escape, but if the accidental crew can't work together and learn to trust each other, they'll die together, victims of a computer that doesn't realize the war ended decades before any of them were even born.

Science fiction is a genre of a thousand tropes, each one of which can be explored in an infinite number of ways. Derelict hinges upon one of my favorites—the resurrection of an ancient conflict by someone or something that doesn't realize it has ended. LJ Cohen does a fantastic job in Derelict in not only sparking a wonderful story with this gem of a premise, but showing how an untended consequence can have profoundly different effects on the lives of those unfortunate enough to be swept up in the mess. The world begins with this book has all of the depth and intrigue you could desire out of a space opera. If you're like me, this story will have you hooked. – Joseph R. Lallo

Ro stood in front of her father's workshop door, her hands damp. After one last check on his location, she ran a service override on the door lock. It opened, silently retracting into the compartment's walls.

She hesitated at the threshold. If she turned around right now and sealed the door, he might never find out. But she'd never get her chance to escape. She swept the room with all the security subroutines she had. They all reported clean.

Swallowing the lump in her throat, she stepped inside. She paused, waiting for his angry voice or for an arm to grab her in the darkness. There were no sounds except for her heartbeat and harsh breathing.

"Lights up twenty percent," she whispered.

His work table was an explosion of computer components. Some were functional, some in various stages of repair, some clearly beyond even his help. Half-cleared notes on loose sheets of permapaper littered the floor.

She didn't even know what she was looking for, but she knew she didn't have a lot of time.

A large roll of archival perm took up most of the space across the desk. She unrolled the free edge, anchoring it down with a broken impeller. It was a schematic for an old class of freighter. The perm was marked up with her father's cramped writing and sketches. She peered closer, bringing her micro to illuminate the faint marks. The familiar connected block-and-tube outline of Daedalus station emerged, with the ship jutting out from one end.

Ro's heart raced. This was the wreck. Where had her father gotten its original engineering diagrams? And what was he doing with them?

Ro winced at the AI's loud voice. She turned back to her father's desk. The archival perm didn't have a standard interface, so she couldn't clone the data. But she could take screen captures and stitch the pieces together later. Unrolling sections of the schematic with trembling fingers, Ro snapped a picture of each one.

She re-rolled the perm and moved the impeller back to its spot on the desk. After a last quick glance around the room, she turned off the lights and shut the door behind her. Slipping her micro into a pocket, she headed for the galley. The door to their quarters opened. Ro tightened her hand on the mug she'd taken from the rack beside the sink full of dirty dishes.

Her father's gravelly voice made the hair on the back of her neck tingle.

"What are you doing?"

She turned, pressing her spine against the galley's edge. His eyes glittered in the low light. The galley's counter separated them, but there was no way for her to escape their quarters without passing within arm's reach of him.

"I was making coffee," she said, careful to keep her voice neutral. "Here," she said, sliding the mug across the counter to him.

Ro walked to the end of the galley and tried to slip past him, but he grabbed her upper arm and squeezed just hard enough to trap her. Keeping her body completely still, Ro fought to steady her breathing.

Mendez must have notified him. She lowered her gaze from his hard, green eyes, but carefully kept him in her peripheral vision.

Her father shook her softly and her gaze snapped to his face. Ro kept her tone bored, flat. "It's just an internship assignment. It won't interfere with my responsibilities here."

He let go of her arm. Ro stumbled back, resisting the impulse to rub where his fingers had been.

"I'll be in my workshop for several hours. I expect not to be disturbed."

Her father leaned over her to drop the mug into the nearly filled sink before returning to his workshop.

He paused at the door.

Ro's heart hammered against her ribs.

"Just so you are aware, I'll be programming extra security measures. For your own protection."

The warning didn't have to be stated any more clearly. Well, he wasn't the only one here with a secret.

Ro frowned down at the mess of food archaeology, her nose wrinkling at the smell. From now on, he could deal with his own meals. She would dine at the commissary with the other station staff. After all, she was one of them now. At least one of the Maldonados could start acting like it.