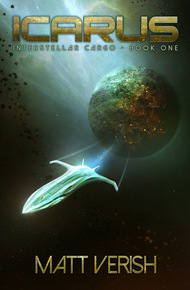 Matt Verish is a science fiction author who has been writing stories since the fourth grade. He realized his desire to become an author when he met his wife, Stefanie, in the autumn of 1997. They kept in constant contact while Stefanie was away at college, and it was through email that they planted the seeds of their epic fantasy world, Secramore. Eventually they became M.S. Verish, and they have been writing books as married co-authors ever since. Matt is a John Carpenter film buff, lover of all things nature and science, hopelessly behind on his reading, collector of his wife's artwork, and a thrash metal music connoisseur. The Interstellar Cargo series is his first full-length solo project.

Cole Musgrave's dream of interstellar travel is about to become a nightmare. When a high-profile delivery is compromised aboard a state-of-the-art cargo vessel, the newly appointed captain finds himself embroiled in an assignment far above his pay grade.

Blackmail, terrorists, a malfunctioning prototype A.I. pilot, and a sinister terraforming corporation with deep criminal ties await him. Who knew delivering cargo to the deep recesses of space could be so dangerous?

Armed only with his cunning and past military experience, Cole is one against many. But this unorthodox interstellar cargo pilot won't go down without a fight—even after he is faced with a choice that will alter the course of his life forever.

As frequently happens when the times comes to gather my thoughts about these stories, it dawns upon my how stunningly different stories can be, even when built of the same elements. State of the art starships, malfunctioning AI, retired soldiers, a seedy criminal underworld. I've toyed with all of these literary Lego in my own stories, but Matt Verish assembled them into a thrilling story I never could have dreamed up. A triumph of storytelling and imagination. – Joseph R. Lallo

Cole awoke to the sound of Lin's droning technical babble. His world was fuzzy, and his head felt as though someone had stomped it. Then he remembered that someone had. In fact, that someone sat directly across from him now, her hand upon her holster, her expression dark. He groaned, feeling sick.

"How good of you to join the presentation," Emmerich said, her soldier's voice dripping with disdain. "Dr. Dartmouth was just educating the clientele on the logistics of the ICV-71."

Cole thought he might throw up right then and there. Staring at the live feed of the presentation through the viewport screen was a major struggle. "She has a real binary sort of charisma."

Emmerich shook her head. "And you have real problem keeping your mouth shut."

Cole grinned, though it hurt to do so. "My mouth has a mind of its own." He closed his eyes and took a deep breath to calm his swimming vision. He tried to focus on the words being spoken, wondering when she would enact her double-cross.

"She has an exceptional mind," Emmerich said of Lin. "It was a shame to watch her talents go to waste under the short-sided vision of a logistics company."

"Is that why you recruited her?" Cole asked, testing the waters.

"She had no choice in the matter."

That was a definitive answer, Cole thought, surprised by the bluntness of her response. No wonder Doc wants Emmerich to be "dealt with." He ventured opening his eyes again. "What about Forester?"

Emmerich's brow furrowed and she looked away without offering an answer. She pretended to be interested in the inner workings of the ICV-71's complex Dark Matter Processor.

Now that was telling. Just who are these three radicals? Cole rubbed his eyes as he pondered the goings-ons of the director, inspector, and engineer. They each seemed to have a different agenda, and certainly there was more going on here than he was being led to believe.

"You didn't have to kick me in the face."

Emmerich let out a single, awkward "Ha!" "Musgrave, kicking your face was a necessity, I'm afraid. Eye for an eye."

"Boot heel for a shoulder, as it were." I really need to shut up.

Emmerich gazed thoughtfully at Cole. She pointed at him. "You're nothing like your mother. She was an admiral of the truest sense, and she commanded respect." There was a longing in those steely eyes. "Each word she spoke was careful and weighted. She was the epitome of class and confidence."

"She was a ruthless megalomaniac, hell bent on commanding the entire System." Cole did not regret his sharp comment, and he couldn't care less if he shattered Emmerich's vision of her hero.

The two locked gazes, the heat between them hot enough to burn a hole in the ship's hull. And then Emmerich smiled and cleared her throat.

"Yes," she said, amazing Cole. "I suppose she was." She sat back and relaxed. "But that doesn't diminish her accomplishments or my view of her." She seemed to be recalling a memory. "But I'd be lying if I didn't acknowledge just how much of a ball-buster she could be."

So glad to be sharing in this moment with you, Cole thought, finding no amusement in the conversation. His fists clenched and he felt a great welling of anger surge within, threatening to explode. He wanted nothing more than to throttle the inspector where she sat with her stupid grin and idiotic sentiments, but the scene transpiring on the viewport screen deflated his ire. The presentation's participants had migrated to the hangar bay where the ICV-71 was stationed.