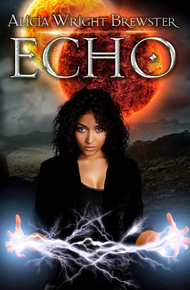 Alicia Wright decided to write books about ten minutes before graduating law school. She is now an Atlanta attorney, but she moonlights as author, electronics junkie, and secret superhero. With degrees in computer science, she has a love and knowledge of technology that inform her stories. She writes fantasy and science fiction for young adults.

The countdown clock reads ten days until the end of the world. The citizens are organized. Everyone's been notified and assigned a duty. The problem is . . . no one knows for sure how it will end.

Energy-hungry Mages are the most likely culprit. They travel toward a single location from every corner of the continent. Fueled by the two suns, each Mage holds the power of an element: air, earth, fire, metal, water, or ether. They harness their powers to draw energy from the most readily available resource: humans.

Ashara has been assigned to the Ethereal task force, made up of human ether manipulators and directed by Loken, a young man with whom she has a complicated past. Loken and Ashara bond over a common goal: to stop the Mages from occupying their home and gaining more energy than they can contain. But soon, they begin to suspect that the future of the world may depend on Ashara's death.

ECHO to me is like a warm breath of fresh air, something that I can enjoy and read while also pumping my fist in the air as the girl protagonist leads the way. If you enjoy young adult science fiction, this diverse spin is for you. – Terah Edun

A sleek black transport idled just outside, directly in my path. Its capsule-shaped body hovered several inches above the ground, emanating a steady hum. Beyond the tinted windows, a silhouette reclined in the backseat.

I moved to detour around the vehicle. The driver-side window slid down, and an impassive gentleman with hair graying at the temples peered out at me.

"Get in." The vehicle door slid open. "I'm your Council transport."

When I hesitated, he repeated his command, this time louder. "Get in." He pointed upward to the sky. "We have no time to waste."

I resisted the urge to look where he pointed. Numbers representing the countdown had been continuously projected in the sky for the past nine months—as if we needed a constant reminder other than our comm units.

The weight on my chest lifted a bit when I saw who was in the backseat—my distant cousin and best friend, Rey. We'd grown up together, since our mothers were so close and gave birth to us only two months apart.

"It's okay, Ash. Get in." As usual, Rey's sleek dark hair was pulled back into a ponytail. His olive-skinned face shone with excitement.

"The trip is forty miles," the driver said. "Eight minutes. We should arrive at the Council just in time for the morning briefing."

Rey scooted to the other side of the vehicle, and I slipped in next to him. I tackled him into a tight hug and squeezed, letting his familiar arms comfort me. The door whirred as it closed, and the transport shot off toward the Council. Despite the dirt road in this region, the ride was smooth as the vehicle skimmed above the ground.

I finally released Rey from my hug. He chuckled and patted me on the back. His brow furrowed. "You're going to the Council?"

"Looks like it." I searched the inside of the door for a window control, but no switches marred the smooth metal surface. I raised my voice and called to the driver, "Will you put the window down please?"

I couldn't help feeling excited to ride in a Council vehicle. I'd read about them at the University, a school for anyone over the age of twelve. But being unskilled according to Council standards, I never expected to ride in one.

The window glided down. I leaned away from it, expecting the wind to batter me at this speed. But the interior of the vehicle remained just as still as it had with the window up. I inched my head outside and felt little more than a soft breeze.

I peered downward. The vehicle's flat, wheel-less bottom flew just above the ground. A Breather transport. The driver, a Breather, was an air manipulator displacing the air to move us this fast. Twelve years ago, when Rey had first discovered he was a Breather, he spent a month chattering nonstop about getting one—as if he could afford a piece of equipment like this.

Rey had applied for a position at the Council once a year since the age of thirteen, but they hardly ever accepted unknown recruits. Most Council members belonged to families that had been involved with the Council when it formed, almost two centuries prior. The Vision apparently changed that, because the Council publicly asked all elemental practitioners—people who could manipulate the elements—to register their abilities. Rey had been the first one in line to do so, and he'd been recruited along with the few other practitioners I knew.

Rey shouldered me to the side and stuck his head out the window along with mine. "It's amazing, isn't it?" He leaned his body farther outside.

"Hey!" I grabbed him around the waist and anchored him to the seat. "Could you not do that? You're going to give me a heart attack." He pulled his torso back inside. "And you know you have a window on your side too."

"Yeah, but I can't annoy you from over there." He flashed me his lopsided grin. My mouth twitched though I tried not to return the smile. That trademark grin of his, along with the shining dark hair, had proved a winner with the ladies in the past few years. He was like a brother to me, but even I couldn't resist a smile when he gave me that grin.

My stomach lurched as I caught sight of the trees rushing past us beside the road. I'd never moved this fast before. My insides didn't appreciate it.

I pulled my head inside the vehicle. Rey and I leaned back in our seats, and the window slid up into place. For a few minutes, we sat in silence in the backseat. I twisted my fingers in my lap as Rey mutely examined the interior—which was odd for him since I usually had to beg him to shut his mouth.

Our driver stared straight ahead, his back stiff. I wondered if everyone at the Council was like that. Cold and detached. They'd always claimed there was nothing hush-hush going on behind their doors. They worked for the people, protected the people. They also set rules for elemental practitioners. Those rules had never concerned me since I wasn't a practitioner.