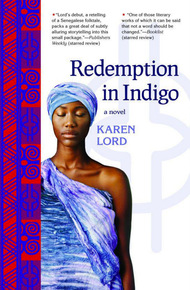 Barbadian author, editor and research consultant Karen Lord is known for her debut novel Redemption in Indigo, which won the Frank Collymore, Carl Brandon Parallax, Crawford, Mythopoeic, and Kitschies Golden Tentacle awards, and was longlisted for the Bocas Prize for Caribbean Literature and a World Fantasy Award finalist. Her second novel The Best of All Possible Worlds won the Frank Collymore Literary Award and the RT Book Reviews Reviewers' Choice Award. Its sequel, The Galaxy Game, was published in January 2015. She is the editor of the anthology New Worlds, Old Ways: Speculative Tales from the Caribbean. Her most recent novel is Unraveling from DAW Books.

Redemption in Indigo by Karen Lord

Karen Lord's debut novel is an intricately woven tale of adventure, magic, and the power of the human spirit. Paama's husband is a fool and a glutton. Bad enough that he followed her to her parents' home in the village of Makendha—now he's disgraced himself by murdering livestock and stealing corn. When Paama leaves him for good, she attracts the attention of the undying ones—the djombi— who present her with a gift: the Chaos Stick, which allows her to manipulate the subtle forces of the world. Unfortunately, a wrathful djombi with indigo skin believes this power should be his and his alone.

Bursting with humor and rich in fantastic detail, Redemption in Indigo is a clever, contemporary fairy tale that introduces readers to a dynamic new voice in Caribbean literature. Lord's world of spider tricksters and indigo immortals is inspired in part by a Senegalese folk tale—but Paama's adventures are fresh, surprising, and utterly original.

I came across Karen Lord's bibliography by chance and I was immediately fascinated. A novel that brilliantly re-tells Senegalese folk tales while showing a versatility that would dazzle readers? What's not to like? – Terah Edun

A rival of mine once complained that my stories begin awkwardly and end untidily. I am willing to admit to many faults, but I will not burden my conscience with that one. All my tales are true, drawn from life, and a life story is not a tidy thing. It is a half-tamed horse that you seize on the run and ride with knees and teeth clenched, and then you regretfully slip off as gently and safely as you can, always wondering if you could have gone a few metres more.

Thus I seize this tale, starting with a hot afternoon in the town of Erria, a dusty side street near the financial quarter. But I will make one concession to tradition …

… Once upon a time—but whether a time that was, or a time that is, or a time that is to come, I may not tell—there was a man, a tracker by occupation, called Kwame. He had been born in a certain country in a certain year when history had reached that grey twilight in which fables of true love, the power of princes, and deeds of honour are told only to children. He regretted this oversight on the part of Fate, but he managed to curb his restless imagination and do the daily work that brought in the daily bread.

Today's work will test his self-restraint.

'How long has she been … absent?' he asked his clients.

In spite of his tact, they looked uncomfortable, but that was to be expected of a housekeeper and butler tasked by their master to trace his missing wife, a woman named Paama. 'Nearly two years,' replied the housekeeper. 'She said she was going to visit her family, but the entire family has moved away from Erria,' the butler explained. 'No forwarding address,' the housekeeper whispered, as if ashamed. 'Mister Ansige is distraught.'

Kwame eyed the pair, then glanced down at the papers before him. These were letters from minor chiefs and high-ranking officials politely demanding his assistance. If nothing else, Mister Ansige was well connected. It was a tawdry shadow of the power he had dreamed of—was the true love of this deserted husband similarly tarnished? And what of his own honour? He was very wary of trying to find people who did not wish to be found, but the names on those scraps of paper ensured that any refusal from him would not be quickly forgotten.

Fairy tales and nancy stories, his adult self said, trying to sneer at these scruples before he had time to question whether it was cowardice or prudence that made him cautious. Do the work and stop your dreaming.

'I'll see what I can do,' he sighed with a faint grimace.

He had little choice. The rent of an office, even in a town like Erria, was more than his business could support, and he needed this case to conclude his affairs honestly before he could resume his itinerant ways. He yearned for those days of walking free, with not a townman to pressure him about which case to take and which trail to leave. Leaner days, too, if truth be told, but Kwame had always found liberty more satisfying than comfort.

Poor Paama, his conscience murmured. Do you want to go back, or do you prefer liberty, too?

While Kwame is sniffing out the trail of Ansige's wife, let us run ahead of him and meet her for ourselves. She and her family have resettled in Makendha, the village of her childhood. Much is familiar there, little has changed except, of course, for those who return.

Paama's father, Semwe, had left when a youth, returned, then left again when a man. Now an elder, he will never leave again … at least not the mortal part of him. He had wanted this final return to be a peaceful retirement; he acknowledged with regret that it was a retreat. The townhouse in Erria had lost all peace with regular visits from messengers bearing Ansige's variously phrased demands for Paama's return. Semwe refused to argue with such a man, preferring to go to a place of quiet and safety where unwanted company could be more easily avoided. In a town, houses crowd together and everyone is a stranger, but in Makendha, a stranger was anyone who could not claim relation to four generations' worth of bones in the local churchyard.

Semwe's wife, Tasi, was coming to Makendha for the second time, no longer the timid young wife, but not yet the matriarch. She needed grandchildren for that, and how, she murmured, blaming herself, could she get those while her daughters stayed husbandless? She had no hope that Paama's marriage could be salvaged. She had chosen poorly for her first child, and she only prayed that she might choose more wisely for the other. Paama at least had strength and experience to sustain her, but her sister, Neila, ten years younger, had only a combination of beauty and self-centredness that both attracted and repelled. She took the move from Erria as a personal attack on her God-given right to a rich, handsome husband. Tasi deplored such selfishness but silently admitted that prospects in Makendha were certainly limited.

And what of Paama herself? She said little about the husband she had left almost two years ago, barely enough to fend off the village gossips and deflect her sister's sneers. She didn't need to. There was something else about Paama that distracted people's attention from any potentially juicy titbits of her past. She could cook.

An inadequate statement. Anyone can cook, but the true talent belongs to those who are capable of gently ensnaring with their delicacies, winning compliance with the mere suggestion that there might not be any goodies for a caller who persisted in prying. Such was Paama. She had always had a knack, but the promise had come to full flower through constant practice. It was also a way for her to thank her family. Life, even life without grandchildren and a pair of rich, handsome sons-in-law, could be sweet when there was a savoury stew gently bubbling on the stove, rice with a hint of jasmine steaming in the pot, and honey cakes browning in the oven. It almost cured Semwe's stoically silent worry, Tasi's guilty fretting, and Neila's bitter sighs.

Besides, it kept Paama busy enough to ignore the nagging question of how she was going to tell Ansige she was never coming back. She will have to consider that question soon, for efficient Kwame has already traced her whereabouts and, not without a qualm, reported to Ansige.

And Ansige, in his desperation, will not be sending messages or servants this time. He is coming to speak to her, face to face.

There was a meaningful silence. It said a lot about what might not be seen by such minor beings as the first speaker. The quiet rebuke was absorbed with equal quietness, and then the first speaker tried again.

'Ansige is on the way. He is coming to fetch her back.'

'Delay him. She will be strong enough to deal with him by the time he arrives, and she will only grow stronger from there on. Then, when they meet, watch, and you will see. She alone can safely wield the power that I shall take from our … former colleague.' The last two words rode on the breath of a regretful sigh.

'Will you really? I mean, to involve a human! Are you certain?'

Another pause, then, 'He is going to be very angry. He will try his utmost to get it back.'

The reply held a subtle glimmer of a smile. 'That is indeed my hope.'

These two unknown figures have plans for Paama, fate like plans in which Ansige, if he is not careful, will be brushed aside like a fly. It is the pause point of the wave at its crest, the rumbling of a distant storm, the thrill in the backbone when the eyes of the predator glitter in the moonlight from the darkness of the trees and tall grass. Something is going to change, and it is for you to judge at the end of the tale who has made the best of the change and of their choices.