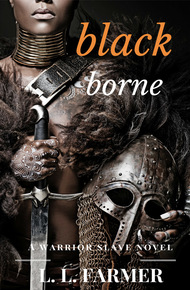 A die-hard fan of Octavia Butler and urban fantasy writers like Kim Harrison and Patricia Briggs, L.L. Farmer has always wanted to fuse her interest in science-fiction and urban fantasy with the African American experience. She is currently working on two projects: a series of novellas centered around the rise of the Kush nation in a post-apocalyptic (rigidly segregated) America and the second book in the Warrior Slave series featuring a butt-kicking African-American heroine. She is also the author of the novel, Slave Ship Rising.

L.L. Farmer holds both a Bachelor's and a Master's degree in English. Even though she has been a secondary teacher for over two decades, her first love has always been fiction writing with poetic aspirations. She currently resides in the Metro Atlanta area with her daughter, an aspiring artist.

Born into slavery in New York City, Neema has fought demons for nearly 300 years, so she thinks she knows everything about the demon world. Until the night she witnesses demons gathered around a murder. In her hunt for the killer, Neema uncovers a fifty-year-old missing persons case. As Neema races to find the truth, she soon learns that what she doesn't know might not kill her. But there are some fates worse than death.

Sometimes you have to a take a chance. I saw this book and I thought a new author to take up the legacy where L.A. Banks left off sounds just right! Welcome readers, to a brilliant urban fantasy world where former slaves become demon hunters and New York City will never be the same! – Terah Edun

I saw him from the corner of my eye, standing in front of the cooler filled with beers. He moved fast, quicker than any human eye could see. But I had become something other than human long ago. I took a single step toward the back of the bodega. Just because no one could see him didn't mean he couldn't harm them.

I laid the bag of Tostitos back on the shelf to free my hands, and released the daggers strapped to my forearms, their sharp tips hidden by the jacket sleeves. I had picked up his trail in Louisiana last week and followed him to New York—the last place I wanted to be. There was no way I would lose him now. Inching my way toward the back, I eased my hands over both daggers.

"Hey, baby girl," a voice breathed near my shoulder.

I glanced beside me to see a man much, much too old to be giving me that look. He wore his baseball cap turned backward, his lined face contrasting with his NY Knicks t-shirt and sagging jeans.

I looked from the Jordan's on his feet to the cap perched on his head and shuddered. Old men should wear neat dress slacks and a button-down shirt. Sagging pants just didn't work after a certain age if they ever did. Too bad I didn't have time for a quick shopping spree to assuage my offended fashion sense.

He rubbed his thumb across his lips, his eyebrows moving up and down in a delusional version of sexy. Horrified, I couldn't stop looking at him, all my energy focused on keeping the Eww from passing my lips.

"Anybody ever tell you, you look like a delicious Hershey kiss," he said.

Holding up a finger, I shook my head. "Don't," I said, refraining from making one of my snide remarks. Frowning, I turned back to see my quarry staring straight at me, frozen.

"Damn," I muttered, right before he leaped over the shelf and bounded out the door. I so hated when they recognized me.

Moving just as fast, I raced after him. That was one of the interesting side effects of being forced to live forever: enhanced abilities. We raced down Broadway, crossing against traffic signals as he weaved in and out of pedestrian traffic. We were so quick we barely registered to the humans who felt our touch like a strong wind. When we turned up Madison Avenue, I grew angrier with each step. I hated when they made me run.

When I got close enough, I tackled him. As we landed, my daggers pressed against his neck, the holy water sealed in the blade burning his skin. He gazed up at me, the fear in his eyes palpable.

Once upon a time, I had relished in their fear. This was when the anger cut so deep I fell just shy of tormenting those I hunted. Now, the anger had simmered to a steady bitterness, but they still remembered what I had once been.

"Why are you here?" I hissed, my knee pressed against his chest. He was a twenty-year-old human, medium in height and build. His white skin pinked with anger as he struggled against my hold. The blade nicked him, and his eyes widened as he stopped moving. His ability to take on human form meant that he was a shapeshifter, falling in the middle of the demon hierarchy. No mere possession for him when he could appear human himself.

I pressed my knee harder, and he gasped for air. "You're a shapeshifter." I said. "You live to fight. I know you're here for the same reason I am. Just tell me where the death demons are."

Most demons traveled in packs, in particular death demons. That this demon had traveled so far meant something huge was happening. He had been called.

"All demons lie." I said, twisting one hand in his chin-length black hair. His charming Southern looks had become a lot less blue-eyed blonde in New York. If I had not become accustomed to his scent, I wouldn't have recognized the grungy, dark-haired young man in front of me. He had even added eye-liner to his look. "Just tell me why you're here."

"There's a woman," he swallowed as my blade nicked him. His skin bubbled black where the blade broke skin. "She's to die tonight."

"Why does she matter?

"Then tell me where they are."

He tried to shake his head again. "I don't—"

I moved the dagger just a little closer until blood trickled from the cut on his neck, and the blackened and bubbled skin spread.

I smiled. He was trying to buy time. He would show me, not tell me. I moved back, daggers sliding back into place. Before he could stand, I had locked an iron collar around his neck and wrists, its link chain in my grip. At first, I had refused to use this symbol of slavery, this reminder of my capture in South Carolina, but I had needed something sturdy.

The Priest had forged the shackles into a prison for demons, and none had ever broken their hold. It had taken me many decades, several escapes, and entanglement with a mad demon before I broke down and used the shackles. I had never gotten over the churning in my stomach though when I shackled any demon. Even now I didn't want to use the chains even though I knew the demon world had relished our prolonged captivity, but I couldn't trust this young demon. I had become well-versed in the lies of demons. Trusting them was always costly.

His eyes glowed at me with hatred. "There is no need...."

I yanked at the chain and let him stumble beside me as we headed toward the street. "Show me," I said, almost tripping when he burst into a run, his wrists nestled against his chest.